i post here some game review request now and then. Recently i played against some SDK, which went pretty bad for me…

At the moment i find myself again stuck at 12kyu, which pretty sucks (Was 9-10 kyu for a while).

Whatever, i have another game here, which i lost by small margin of points.

I did a quick review by myself and made some comments, which I THINK could be helpful for me as DDK??! 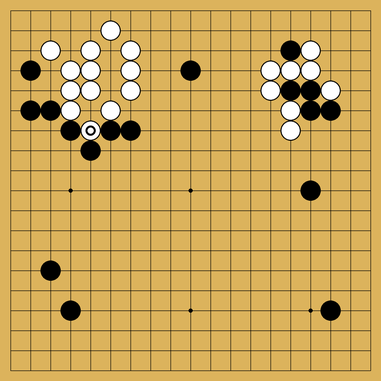 Even tho i lost, i think i can get A LOT out of THIS PARTICULAR game.

Basic topics i think are interesting are the following:

Thanks to all of you for your patient time!!

I made a review that is still incomplete. I’m tired today so I will come back to it later. I couldn’t figure out a way to build on your review, whether it is possible to make my comments and branches distinguishable from yours etc. I think it is good that you are asking specific questions about the game as AdamR explained in another thread.

My review is now finished.

To answer comments in your own review:

I made a review as well. if you have any questions let me know