would appreciate, if someone could elaborate on my mistakes in this game.

I thought I did pretty well (without be too self centered), I liked my shape, and how my single groups connected later to two or three major big groups.

HOWEVER, I messed up in late endgame I think. One or two major issues cost me probably the game. Anyway, would appreciate some comments on the game. 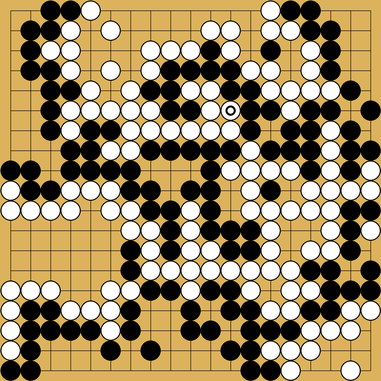 On (13), it’s good form to jump out to G3, ensuring your continued access from the living corner group to the bottom side; otherwise F3 can be a big move for White. Still, the game move is big.

On (15), your shape is strangely elevated, giving White aji around C9. C11 would have been more usual.

On (29), you make an influential shimari facing onto the right side, on which your position is low – it’s a questionable direction. A keima enclosure to guard better against a 3-3 invasion may have been more appropriate.

(37) seems gote, and isn’t big enough to justify that.

On (41), a hane is natural and fits well with your joseki choice in the lower right.

(43) is a strange time to jump out. Since O2 is undercutting your position, it’s not as valuable a move as it was earlier in the game.

(47) is very slow; White’s not threatening anything.

White’s (48) highlights the weakness you first permitted with the questionable D11 shape. Your kick (49) isn’t a solution, since there is still a lot of aji for White at C12. Your aren’t behind; you can afford to defend properly, in gote, with C11.

Your invasion technique on the top side is good, although N15 is perhaps a bit slow-moving. You could consider K12, but that shape is also a little tricky at your level.

The peep (65) is a bad exchange, which makes a Black hane at N9 less effective.

You shouldn’t play away with (67), since the R11 is still eyeless and in a hostile area. It can be attacked quite easily from the centre.

On (71), since you already played P13, you may as well connect properly with O14. Then again, you are indeed weak on the left side.

(73) isn’t really a connection, since White can push and cut through either defect.

I’ll let someone else review the fighting.

I added a review. The singe thing that decided this game was the fight on the right hand side. Both you and your opponent ignored that group for a substantial part of the game in which white was definitely dead, locally. Eventually, white blundered and you had their group killed, but then you blundered back and they got out and lived. Move 179 was decisive, but there was a long period of the time when you had them surrounded with a single eye in Gote and played away. (At the end of the game, you blundered a bunch of stones, but you were already lost, there.)

You’re good at finding big moves on the board, but you’re playing a lot of them when there’s urgent things to address, either because you’ve got weak stones that need to be defended or because your opponent has a defect that you could press for profit. Reading mistakes happen to everyone and will improve over time, but make sure you’re reading things out! Check the various ataris and cuts and see how they play out before you play away and go for a big move somewhere.