I would appreciate some advice on how to improve my assessment of a (relatively simple) 9x9 situation in a game I completely misjudged.

In this game, by move 19 I reached the following conclusion (all wrong, it turned out):

I concluded I might as well try a 3-3 invasion which I had no idea it will succeed or not. In the worst case I would learn something about invasions in cramped spaces.

So I played G7. And lost the game (well, technically I won it by time out, but I should have lost it).
I definitely learned something about 3-3 invasions, but the interesting part came in the post-game AI review, when I learned that my original assessment was completely wrong. In particular, I should have played E6 and charged through the center, an option I had considered impossible.

My question (which the AI can’t answer) is: what is the reasoning behind W E6 at move 20? Is it pattern recognition accumulated after many games? Or is there a strategic principle at play? Or it just reading ahead all the moves from E6?
Or a combination of those?

I’m not sure about W E6 at move 20, but it looks like the AI is making ko threats for the impending ko created by your double hane. I’ll show a variation.

To make the discussion (or plea for help) more concrete, I though I’d post katago’s assessment at mv 20: 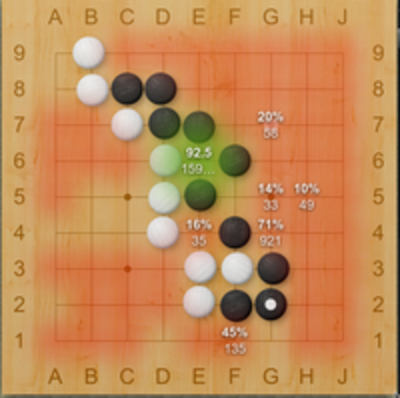 as well as the continuation it suggests:

Needless to say, they are both over my head

The AI sequence is complicated, but the reason for it is really just about fundamentals. Cutting and connecting is the most basic tactic in Go. Connected groups share liberties and get strong together, while disconnected stones can’t cooperate in that way. As a result, when you expose a cutting point, it creates aji and makes your opponent want to connect. And if they don’t connect, they must face the consequences when you cut.

Here, the E6 move exposes a cutting point at F7. This makes Black want to connect there. But if Black connects F7, White can win easily by half a point (I provided the sequence for that). So Black can’t connect. And the AI craziness stems from Black trying hard not to lose by half a point. But as it turns out, there’s a lot of aji in the cut no matter how Black answers, like the ko that @FinrodFelagund found.

Thanks Mark and Finrod, bot for the comments and the variations.
I think I now understand my basic error—the misreading of the center of the board was the result my failing to literally see the elementary pattern (which Mark pointed out): the diagonal connections E7-F6 and E5-F4 are weak and need to be defended if attacked. Everything else follows from that. I should have thought: “There are weaknesses at the center and the game is won or lost on a successful cut.” Or something along those lines (keeping into consideration Mark’s variation about the easy 1/2 point win).