Now, now, let’s move to the quiet place of the forum, with the open bar and the buffet

I went in really afraid of the rank difference, and it took me some time to find my hands and play more freely.
Bad thing is, right then things started going downhill, so maybe scared play was what should happen, but it’s too restricting

(this could of course be that my courteous opponents don’t want to bludgeon me to death from move 5).

I think my direction suffered less this time, and I read out some things that I normally wouldn’t (I think the people who were watching live could tell…)

It was an intense game for me, and I will see it again with clear eyes tomorrow, but as always any comments are welcome.

Note: Other than this fun tourney, I will be playing more or less equal games, we’ll see how that goes.

This was a complicated fighting game. I agree that your direction was good and in my opinion you held your ground very well against Jakobb. I have a couple of comments, although I can’t say much about the center fighting without deeper analysis, as there appear to be multiple potential capturing races at play.

This review turned out longer - probably too long - but I hope it was still useful.

How you guys call me?!

I always introduced myself as Ji-a (stressed at i, the same Italian nickname that Georgia has), but I like Guy-ah lol, it sounds like Gaia and so classy and Hellenic.

No such thing for a review.

I hadn’t realized it wasn’t such an abysmal loss from the beginning, it’s a bit disheartening that I can’t tell my own moves.

I noticed that some “initial” moves were good for AI, but I messed up the execution, so at least the idea behind it was good I guess

I want to add: b24, the default move is on p3. This reduces liberty of white two stones and maximizes the pressure, sort of like the best defense is offense thing. Black should not fear being cut with the space to extend on the bottom and black stone at q10 for support of the other two black stones.

Besides, white has to add a move in the corner to be alive and does not really have time to cut black. 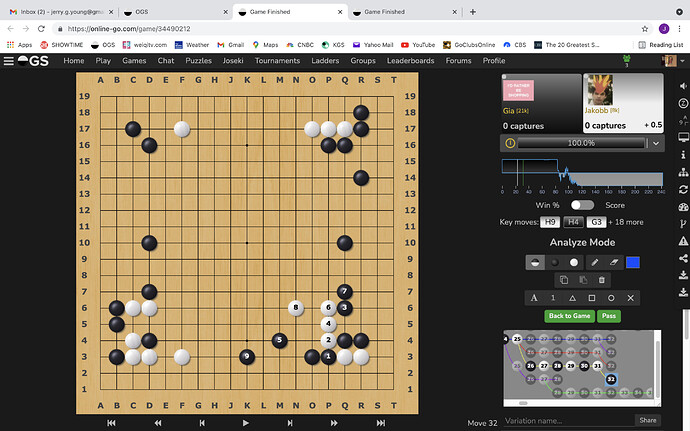 I thought I remembered you saying it had a hard G, like gear, but it was just Lys nodding along to my misinformation.

That made me laugh

(also because I used to read it like jia, since Italians use soft g before i) The pronunciation is wrong. 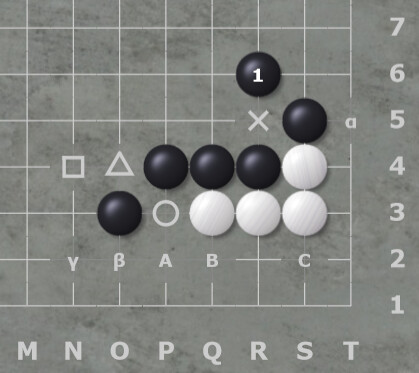 I think the play in this corner was very important.

Firstly, note that White O can be responded to at one of the 囗 or Δ points. If (1) or Black X is on the board then you can play 囗, as the liberties of the P4 stones won’t be an issue. Otherwise, Δ is safer.

The issue with α is that it only indirectly fixes the cut at X, as compared at (1) or X itself, moves that address the defect directly.

If you do play (1) or X and White plays away, you have the hefty punishment of A. 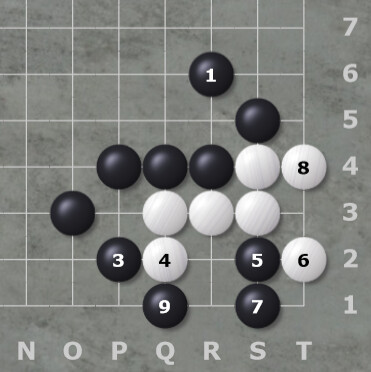 Supposing (1) or O has been played, I think the proper continuation as White is (1) A, asking Black to eventually play β if she is to develop the bottom side, or else White’ll jump to γ.
That said, O is more sente, peeping the cut.

Note also that if α is the first move, as in the game, then White can consider asking for α β; γ A, and see if you’ll spend sente fixing at N3. If there’s (1) or X instead then you can respond to β at A and White is busted.