I have another game to check out. I’m curious about what other possible moves can black (or white) made.
Like is it possible to capture white’s group?
And are there game-changing moves for black?
Or is white’s center forming group the winning game group in this game?

3rd edit: We discussed about what what were some flaw moves are some possible variations after black 41. It’s quite interesting to look at that white group in the center.

My opponent believed move 51 was game-changing, but I disagree because white still wins the big top territory. But we both agree that move 47 was a big flaw for black.

After White 46
five - if i tried capturing the l4 stone, this can happen for white.
six - much cleaner than five
4th edit: more variations ^

5th edit: I ran out of possible variations that can happen after black 41…
But I believe that the white group in the center is a game-winning group, unless otherwise.
It is an interesting puzzle to look, but for me as a 20kyu and playing go for about 2-3 weeks, I can’t think about what can win make black win like this…
Anyway, thanks for checking it out and reviewing this game!

Posted a review on your game - hopefully it helps!

As for your questions, move 47 was what lost black the game. Move 51 would have been cool IF and only if L and M5 were still alive.

I don’t think the game was over after move 38 - there might still be some opportunities for a black invasion of the top left corner, and good endgame could have easily shifted the balance for black. There is always the possibility of a major ko fight breaking out as well (you may not know about those yet, but they can change a game in an instant).

Let me know if you have any questions. I am a little confused about Black G11 and White F10, but if White captured G11 instead, my guess would be that it’d be a free move to Black? And would F9 be a good response for that? Or would I still have to connect with H9?

Yeah, my apologies, fstop. I got back to confusion about this white response on the second variation(?? it’s at that light blue branch). D:

Because putting Black at G11 and having White respond with G12 leaves Black G11 at atari, and then a capture.
Why is Black G9 a good response rather than extending Black G11?

I started a strategic review of this game. Some comments are welcome. By extending at F11, Black gets into trouble (see added variation). The goal of G9 is to cut the marked stones in order to kill them. 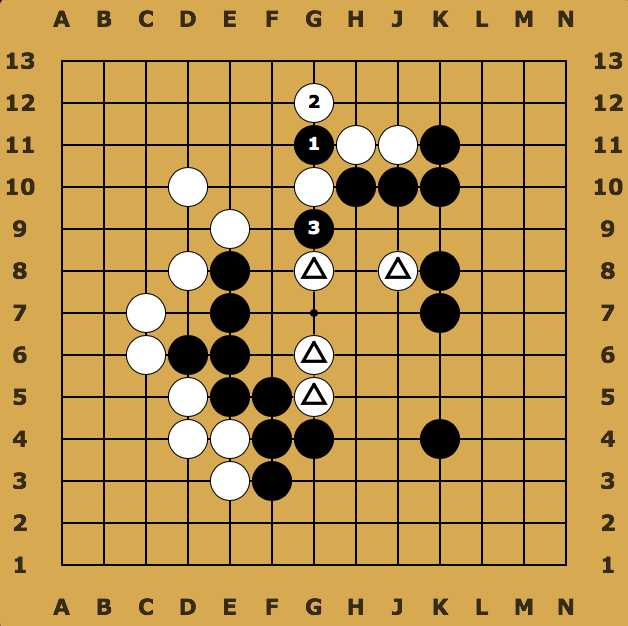 I added more variations around those moves.
It’s probably impossible to understand the reason behind every moves. You can only play more and get stronger