Hi everyone! I’m new to OGS and Go in general. Been playing alot killing time though while home with my new baby girl. Gotta get through those sleepness nights somehow right?

I probably don’t have enough time invested for advice other than play more games, but this game burned my rear because I misclicked a stone. Loss of .5
I play on my phone with a cheap stylus thing off Amazon what can ya do.
The ai says i was winning until the end…I think my misclick @ move 127 ruined me. But I’d really appreciate your thoughts on the game. Even if it’s “ohmygawd what are u doing?!” I’ve seennick sibicky and dwryin on YouTube review weak players so i already know whats in store lol
Thanks for any help you can give! 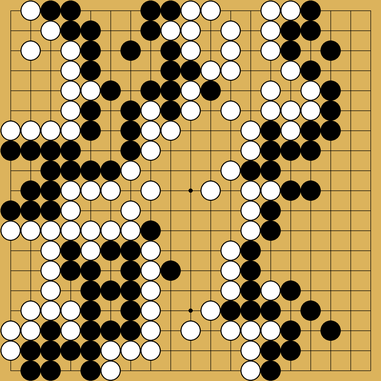 Btw I do have tsumego and try to do at least the easy ones until they’re internalized at least once a day.

Welcome to OGS.
Ok it is not really a review but you can go to settings to make it so you need a submit move button.I think you played pretty well, I will review it more in depth after showering.

Edit: I found it lol I didnt realize there was a pull down bar in settings thanks yes that should fix hitting the wrong space!

Thankyou for the review Snakesss! No sadly what you thought was the misclick was just a blunder on my part! XD i should have connected. And after going through your review there was so much better i could aim for then that basically connected group of 3 white stones!
The misclick was 127 it was supposed to be h6 there, which you showed me i could actually effectively play much earlier!
Which now that ive had more time to study your review, definitely cost me the game x_x

I really gotta work on my reading, ive really struggle discerning whether a cut needs protecting or vice versa when i can cut and win! But your examples and explanations really help! Same with endgame, i gave away alot of points that you showed me were salvageable.

The main things that cost you the game were making too many small moves or even passing moves (e.g: moves that aren’t necessary and either don’t do anything or cost you points.) Consider Q12, your second to last move of the game: it isn’t necessary since if your opponent ataris your stones you just connect. There isn’t room for your opponent to live in your territory, so there’s no need to defend anything. Playing there cost you a point, which cost you the game. 181 and 189 are similarly moves that don’t accomplish anything and each cost you a point by unnecessarily playing stones inside your own territory. There’s also moves like 185 and 187 that aren’t inside your territory, but are “passing” moves that don’t gain anything while there’s still relevant moves on the board. In japanese scoring, these moves are the same as passing and giving your opponent an extra move. Playing 185 at A3 instead of C9 would net 3 additional points, since you’re reducing your opponent’s territory by 1 point and creating two points of territory.

For small moves, I’d highlight move 139. Here, you’re gaining one point at best, while there’s still plenty of moves that either contend substantially larger amounts of territory or that are sente (meaning that your opponent must respond immediately or lose lots of points. F1, A7, J19, and C18 would all be good candidate moves.

Even after the misclick, you’re definitely way ahead. Even ignoring the best sequences (like the O14 atari), if you just consistently play solid productive moves in the most open parts of the board you win by a substantial margin in the following endgame.

Thank you Ckersch for the insight! I still have alot of work to do! I see now that I had alot of missed opportunities that i could have capitalized on. My end game needs alot of work and i have to learn to read better so I’m not so defensive!