I lost this game because of a obvious oversight: I thought a group was alive enough but it wasn’t.

I felt though that I was missing something from the beginning. How should I approach the top?
Could I exploit cuts in black shape on the left?
What else?

And, of course, after move 135 the game was over… but I’m still trying to practice endgame! 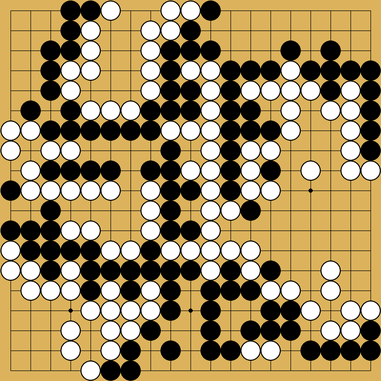 i took a look… i didnt feel very insightful this time around, sorry xD. but maybe there is still something you can use.
cheers

I put 4 variations in your game chat. how many local move do you read ahead in opening? i feel like you did not read much. two groups totally surrounded in opening is just not bearable.

On move 14, i don’t know if it is good or bad, but i just would not go there against a stronger player this early.

Added later: now I realize black is playing chinese fuseki. I sort of remember this opening invites you to do move 14. again, i don’t know if it is good or bad. this is more of a question or maybe you can look it up in books.

one more thing, i respectfully disagree with your statement that you lost the game due to an oversight of death or live of a group.

Happen to see this:

Thank you all very much (including @S_Alexander).

First thing I understand is that I should jump sometimes to extend my stones quicker. I feel uncomfortable when pushed and tend to do slow moves and being surrounded.

Also I fear my opponent developing suddenly a big moyo and so I start reducing and invading too soon.

how many local move do you read ahead in opening?

It’s hard for me to read 3/4 moves in narrow spaces: I lost that group because I was convinced to be able to make an eye on the border.
But in opening it’s even harder because of the many possibilities. I usually don’t count and play mostly based on intuition. Which is wrong

.
For example I was surprised by the pincer in the left side (the beginning of the second surrounded group). In that situation I wasn’t able to read just one move ahead

SL has this opening principles, very well written. One of them is not to be too close to opponent’s moyo. That’s the reason your lost group would be under pressure regardless death and live. I am guessing you did not read any opening book before. If that’s true, losing 30 points to a 3k, 6 rank higher than you, largely due to death of the group, shows you are pretty good at this. If you pick up an opening book, you will get to under 5k in no time, i would bet.

I am guessing you did not read any opening book before.

SL has this opening principles,

If you pick up an opening book, you will get to under 5k in no time, i would bet.

Yes. ‘Fundamental Principles of Go’ by Yilun Yang. Particularly good if like me, you’re not strong on rote learning.

I am reading In the beginning: the opening in the game of go.

I am going to be 2k at least after i finish, when i finish, if i finish