Although I have some corr games going, I haven’t played live a while now (maybe the first game in the Challenge

It doesn’t really warranty a detailed review, it was a fast game and I mostly played instinctively, but any pointers for obvious mistakes? 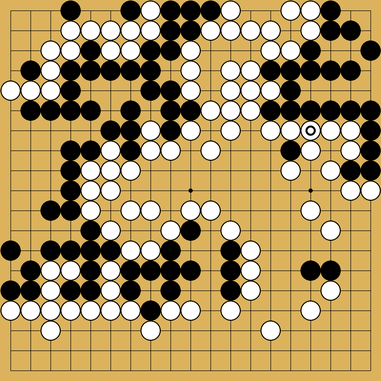 Note: I’ve hidden ranks lately, so I don’t know about my opponent.

A couple of turning points that jumped out at me:

MOVES 58-60: White’s K15 was peeping at your L14 cut point. If you had played L14/13, you could have kept those 5 stones alive and (more importantly) kept chasing White’s disconnected group into the middle - which may have given your upper right group an advantage in direction-of-play. As soon as White cut at L14, that weak group became a strong group, and was able to get not only the middle but most of the right side

MOVES 60-102: You focused on challenging White’s groups at the top, but nothing was threatening enough to actually kill White’s groups. Unfortunately, because you ignored the rest of the board, White was able to get a pretty huge advantage with only 3 stones (Q9, G4, and L9). If you look at the board - by move 102, you are outnumbered in all the other areas of the board. All White had to do was keep you contained - and after the cut at G7 (move 108) - they even got to capture one of your weak groups.

IMHO - the type of moves you were trying to play during the Move60-102 portion would have been more appropriate at Endgame.

I recommend focusing on the Stages of the Game as it will help you make more efficient moves all through the game. Good luck!

All White had to do was keep you contained - and after the cut at G7 (move 108) - it even got to capture one of your weak groups.

You made the same mistake again :D

White is a player, not a colour, and needs to be addressed as he (by likelihood), she (by convention), or neutrally they (if you permit the singular they).

When you use it, the reader thinks you’re referring to the cut, which is the only inanimate singular noun in the sentence.

[This is just a bit of banter over something that doesn’t matter, ofc ^^]

OOF - yeah, I keep doing that! To the edit button!

(7) is a bit too close to White’s enclosure – you don’t usually want to play too near to strong groups.
An SDK-level player would be quite reluctant to play south of D13 on the left side, at this point.

When White makes the (10) shape, you usually want to wedge at E17. (11), a move called the pole connection or boutsugi, is a bit forgiving – it doesn’t damage White’s shape. (10) isn’t a proper move; whilst not all improper moves can be “punished”, this one can.

(15) and (17) are too close to your extant C9 stone, making your group overconcentrated. You also make an invasion at C3 less appealing, but I don’t think that’s rank-appropriate to discuss.

(19) to (25) is very good play. Nothing to criticise below SDK level; the only little thing would be that you could have considered asking with P17 at some point. But the distinction is quite unimportant.

(33) pushed but (35) didn’t cut. You usually shouldn’t push unless you intend to cut, because you lose both a liberty and a ko threat. At least you did eventually cut, on (45).

(59) really needed to protect that L14 cut. When White gets L14, you lose all potential to attack the N16 stones, as well as --ofc-- losing the stones themselves.

You played a bit slowly in the upper left. Especially (77) doesn’t make a lot of sense, since there’s not much threat against White. (79) was too small a threat, only asking for something like ten points – it wasn’t yet sente. Not to mention that taking those ten points would be, again, gote.

It’s not clear to me what the idea of (81) is, but it could have just been at C15, sealing the left side from incursion by the corner group, and also connecting to your top-side stones.

(97) isn’t even worth a single whole point – most certainly not worth your time either. Those three moves that Tony mentioned were all important benefits to White’s position. There is a disadvantage of being an SDK, which is that it’s hard to understand the reason why moves like (101) are played, so it’s difficult to offer effective commentary.

After White crosscut with (108), the game became a lot more tactical. Consider, though, that playing (113) let White effectively cut you in sente. To cut in sente is one of the most powerful basic tactics.

There is a disadvantage of being an SDK, which is that it’s hard to understand the reason why moves like (101) are played

I will revisit everything in the morning with a clear mind.

(When I play against a much stronger opponent, sometimes I try to have small goals (because winning is out of the question): I was thinking if I could separate the white stones at the top, but at some point I couldn’t see that clearly either.

I really feel like the first 2 sections of the STAGES OF THE GAME article could help you make sense of this game - and the associated commentary - in a different light.

I know it’s ~20 pages, but once it gets past the intro - almost 2/3rds of each page is illustration - so hopefully the reading doesn’t feel too dense. It tries to walk you through the 2 example games (with links to games on OGS) in similar ways to bugcat’s amazing commentary above - going through the moves on the OGS page brings those illustrations to life.

Once I had my own light-bulb moment with that whole balloon-popping metaphor I came up with, I found it really helped my transition from Opening to Midgame - so at least I got that goin’ for me.

I really feel like the first 2 sections of the STAGES OF THE GAME article could help you make sense of this game - and the associated commentary - in a different light.

You know that the fact that I haven’t liked that post yet or commented means I haven’t read it, I feel like teacher got me without homework

No pressure - please - take it at your own pace.

It does specifically address some of the questions/issues you raised - i.e. why focusing on contact fighting during opening/midgame often ends up giving your opponent an advantage.

The short answer is - contact fighting to capture/kill is a very difficult/advanced tactic and - if it fails to kill - it means that you’ve invested X number of stones and probably gained little in terms of expanding your potential into unclaimed areas. By pursuing such aggressive tactics, you may have also created weak groups and cutting points which may backfire and make your position even weaker.

Your opponent on the other hand still has their living groups and - if they were focused on stage-of-game efficiency - were probably able to make a few whole-board moves that gave them a huge advantage across the rest of the board.

Basically - if you’re not paying attention to the efficiency priorities of the game - chances are your opponent is. The article tries to give players the tools to see where those efficiencies are, and try different things to at least stay even with their opponent. Good luck.

After move s18, the two white stones are dead, but then you rather needlessly spend 2 more moves taking the white stones off the board. You may as well just hit the pass button 2 times because it would have had almost the same effect of doing nothing useful while the other player is busy threatening one of your other groups on the board.