(I peaked rank after the game, I died honorably I guess, they went easy on me, thanks stranger)

Le questions:
-At move 33, AI gives a whooping 21% drop because I played H13 and not J13. Why?..
-Why the insistence to play at N3 for black in the first 30ish moves? I followed the AI variation, I don’t understand what it gives me.
-At move 59, shouldn’t I protect the cut? It suggests Q13, but it seems too far.
-At move 70ish, it starts recommending going under W on the right, but that’s above my paygrade, what does it want to do?
-(I now realize I completely forgot about taking the P6 stone, ouch.)

H13 / J13 pulling back helps with the cutting points (it’s a tesuji shape good to remember. The thing being to play a Keima from the weak stone) Now I can’t tell much more than that.
demo on this shape.
A thing to consider is the ladder on the P6 stone which keep aji, and this is part of the reason why the insistence to play at N3 (your 2d question)

for 59 see variation in game

After 70 AI propose you indeed to attack the right white group, it’snot just to take points there but to deny a life base for white.

Experimenting with using Γ to indicate a hane, because it looks a bit like one.

I think until (35) at least, you played very strongly. I would review more but I haven’t the time right now.

Move 33 was too tight. Black can’t defend all these cuts: 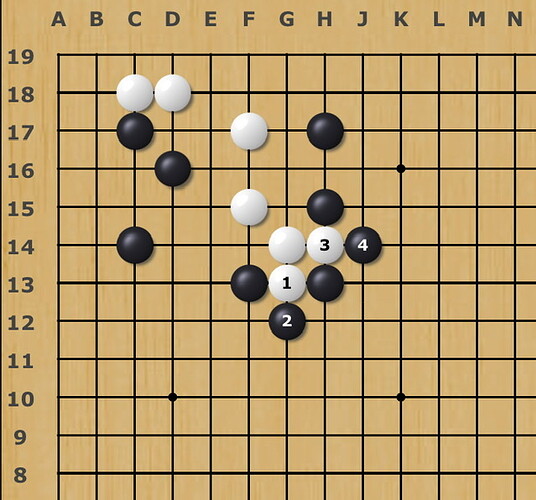 In situations like these, you can think about casting a wider net. Either knight’s move below could work. You can block fiercely at A or build territory on both sides with B while the group runs into the center. 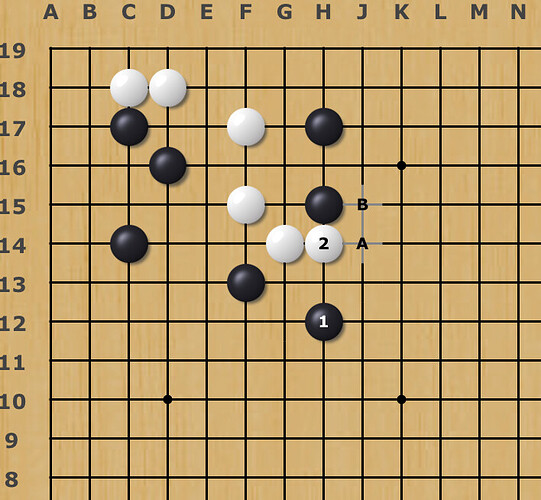 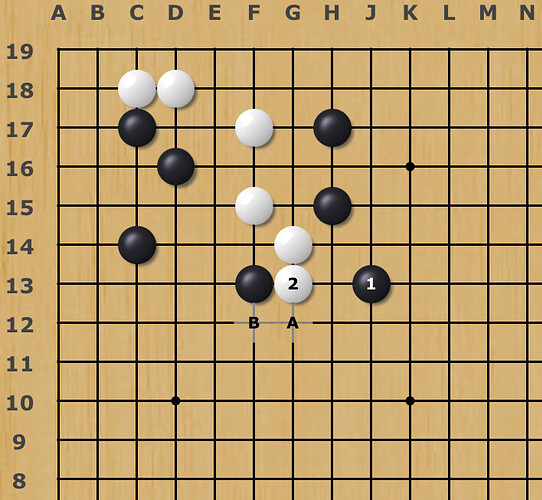 Is my initial, it makes me so utterly confused

|21|Since you’re now thick on the right side, it’d be worthwhile to consider a pincer.

You mean O17? Hm, it does make sense. When I wonder what I should have done in a specific area differently, but AI is focused on a completely different area, it’s no help at all…

Move 33 was too tight. Black can’t defend all these cuts

I think I made the same mistake in another game recently… I thought an area towards the center was mine and then ataris started happening. It hurt a bit.

it’s not always a bad move if you can resist the cuts in some way and use the lack of liberties of the stones pushing through the weaknesses.(by taking sente for ex).
But there is all in all a nice idea to explore, that sometimes, just by playing a bit more far away, things magically work better.

I was thinking that when I try to protect a cut, my opponent plays that move and I have to kill that stone and then I lose initiative… and then… lightbulb…