i have a game here, wish i would love to get review by:

One more example would be the white invasion at move 78, me personally i dont think that white ever should escape here, but somehow i messed ui completely… would appriciate some varation?!
(Maybe there is a way to get some influence, while attacking? 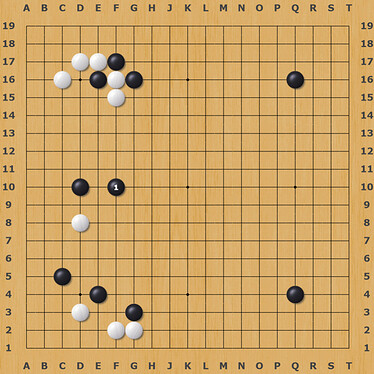 I made a review.

Overall, I feel that black’s shapes were a bit too loose, black missed some opportunities to exploit some dubious moves by white in the lower left and black played a bit passively.
As a result, the game was essentially lost for black by move 102, so I didn’t review the endgame.

My advice is to work on improving your shapes and tactics in future games. Try to increase your awareness for defects in your own shapes and your opponent’s shapes.

Handle invasions ( How to make sure you use your wall efficiently?! For example how to deal with move 18 by white?

Are you thinking your 3 stones below are a wall, and thickness against which you can push the White invader? If so you’ve already misunderstood the situation, because those 3 stones aren’t strong and connected together so they aren’t a wall. As Gennan said you should focus more on making strong local shapes, such as extending on the 3rd line instead of tenuki for move 17. Then that group starts to be strong and more like an asset than a liability.

What was your purpose in attaching underneath 18? Were you trying to connect your groups? If so you should be able to anticipate the 4 moves which happened in the game (or with better solid connect for 22) and your groups failed to connect. You actually ended up making your position worse rather than better with these moves, because you made White stronger in-between your not connected groups. This is a good example of a general principle: if you try to connect 2 separate groups but fail you end up weakening both of them. So it’s best not to try to do the impossible.

Also move 30 is another I’d like to highlight. Your opponent is 9k. Practically every move they play is bad, and quite a lot are terrible. Do not believe them. If you can identify just a few of their terrible moves and play a good move in reply you will easily beat them. This move 30 is a perfect example. Your opponent is saying “there is a cutting point and I am peeping at it which threatens to cut so you should defend”. You agreed. But this was nonsense, as the white cutting stones were in mortal danger and capturable with the second line cut. This required reading a few moves but is a one way street that a 10k like yourself should be able to read if they stop and think for a bit before answering the opponent’s apparent sente move.