I also would like advice. I can’t tell why my move was bad here. Can someone explain? I was trying to stop him from making a wall. I’ve been memorizing openings, but evidently my intuition is really bad. I was white of course. I just can’t tell was this was such a horrendous move on my part. If it’s so bad it should be obvious. There must be an easy to explain reason. 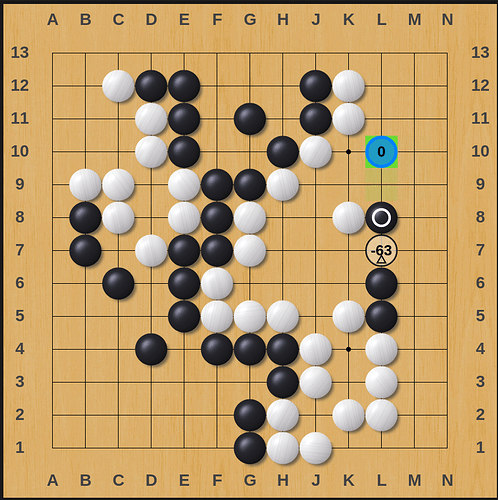 From my limited understanding (stronger players, feel free to correct me):
L7 does not prevent him from making a wall because he can play K7 and your invading stone is trapped. The computer recommends L10 because that helps secure the corner so that even if he plays L7, the black group on the right may not have enough space to make two eyes.

The path to becoming a Beedrill will be a long one.

Ooooof, that is quite a complicated situation. To try and understand L10, we first need to identify strength’s and weaknesses of both players.

L10 then does two main things at once. Although some of it is just based on reading ability beyond our level, there are some basic concepts that apply too. First with L10 W is fixing some of the aformentioned weaknesses and making sure the upper left corner can survive safely (B can no longer atari K10 and attack the upper left corner). The proverb goes something like: “You cannot attack with a wet noodle” and indeed this the case. AI wants to make sure W is strong BEFORE trying to attack black. Otherwise Black can just cut White apart, and while W would probably manage to kill off the L6 stones, the cost of losing the whole top would be too great.

Secondly, W is at the same time limiting Black’s access to the corner, limiting his/her options to widen the base for Black’s stones. When trying to attack something severly, you need it contained to as small a space as possible so it would be hard (or impossible) to find enough room for two separate eyes.

But as far as I am concerned the main concept to take away from the position is: Fix your own problems first, then attack.

@springyboard
I do not have too much time, so perhaps someone might chime in with a more thorough review, but some of my ideas here: https://online-go.com/review/493957

Overall, I would say you did NOT miss an opportunity to invade. The opening seemed quite balanced and both players took reasonable chunks of territory. I did not see a very viable opportunity to invade after the opening, nor would I seek one. What cost you the game was largely a bad endgame.

Many times you took a small gote sequence, while your opponent was taking slightly more. In (or near) endgame we have a pretty simple “rule” - SENTE MOVES FIRST. Whatever points (even small ones) that you can get “for free” are great. Especially the lower left corner was open for way too long. I did not mark it after every move, but I cannot stress enough, how big it was. It does not look like it, but corners are always big. It is like 4 points more for you and 4 points your opponent does not get instead and suddenly it is almost a 10 points difference IN SENTE for you. Not taking it is just bad

So yeah, as far as I am concerned the main lesson here would be learning to work with sente.

I made a much less thorough review than AdamR’s. In summary, I think the weakness of your middle right group made it harder to invade or reduce. 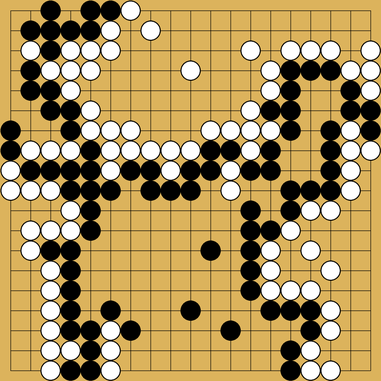 I won this by half a point. Some questions:

In the sequence from moves 12-25, I gained the top-left corner but my resulting stones were very heavy. How could I have handled it better?

At 47, I played tengen because it felt like the biggest move on the board and the corners/sides had already been settled. Was this the right time or too late (as in I should have played such a big move earlier)?

Past reviews have pointed out my tendency to miss sente plays. What sente plays did I miss in this game? Playing through it again, White 132 was a point that I could have played on earlier for a few points.

[Comments for white sorry, I still keep it here
To answer your question at 22 you could have keep black cut in two.
You lose points in endgame with moves like 98 (a gift) and 102 (small gote) 74(a solid connection would have offer you better follow up moves)
As advice, try play more efficient moves which have good future, some of yours didn’t have any at all.]

Tengen was fine for black although he could try bigger with a move from the right side of his territory (it’s no more a moyo btw)
So for black: 21should be at 23, w could have capture your corner stones if not played like this.105 is no need, a wasted move.
Besides the upper left corner thing, you got a cautious and reasonable game, winning with the many small failures of your opponent. You could try to optimize in a bigger way.

A narrow undeserved win. The early game featured three early 3-3 corner invasions (two by me, one by him) but I was behind for most of the middlegame as my central moyo turned to nothing. During the game, I thought the turning point was when I gained the top-right corner in moves 102-113, but the AI says I only gained the advantage because my opponent made a blunder on move 131. Should I protect my group on the very left from the two potential cuts (that black did not play)?

In this game I point 2 things

1 black lived far too easily in your moyo without hurting too much his own future on the suburbs.
When you attack the invader, there is 1 thing to not think: he’s going to die. There are 2 things to do: get still some points for you and build some outside strength to weaken the position of your opponent around.
2 there is a crucial move that the AI suggest during a very long time from very early to middle game but both of you never played it. You can have a look at the variations following this move by the AI.

Besides this in the lower right you don’t just invade a 4-4 you invade a 4-4 with 2 enclosure indeed you should get a ko for life at best, but the way you played it just should have died… See what moves AI suggest