I just played a game, where the following position appeared: 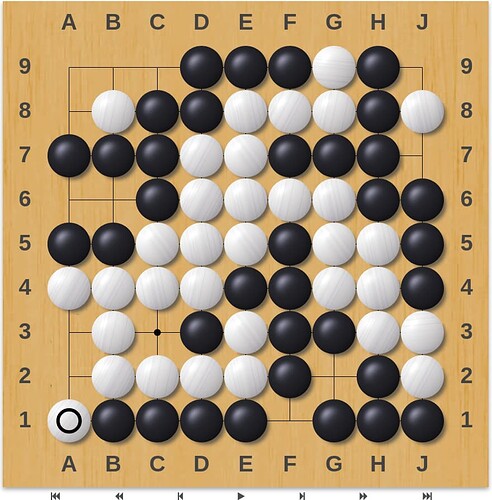 However, suppose the white stone on J8 was black, so I could not do that, and opponent played the same thing. What does the rules say about this? Sure, he loses a stone in each cycle, but if he just keeps insisting on playing it, can I stop the game? I suppose this is not technically a KO? What should I have done about it on this server? What does the rules say about such things in OTB play? (I suppose OTB I could have just refused to play on, and said I won, but I bet some hardheaded guy would have just kept playing and insisting that it was a draw or something).

Thanks in advance for feedback.

Depends if you’re playing with Japanese of Chinese rules.

Under Japanese rules, White gains one net point every time Black insists on sacrificing two stones against White’s one stone. If Black keeps this long enough, White ends up so much ahead that they can just do anything to break the cycle (such as sacrificing all the White stones).

I believe this situation is discussed in more detail somewhere in these two topics:

If this happens to you during an IRL tournament, I recommend fetching a referee to make sure the rules are played correctly and to prove your good faith.

The name of this situation is Sending two, returning one.

Thanks both of you for informative and very quick answers!

Good idea of eventually sacrificing the whole group! Didn’t think of that. I suppose if extremely low on time, that can be problematic, you need to play potentially hundreds of moves in a position where you would have expected to be finished.

Good idea of eventually sacrificing the whole group! Didn’t think of that. I suppose if extremely low on time, that can be problematic, you need to play potentially hundreds of moves in a position where you would have expected to be finished.

If you’re playing with either a Canadian or Fischer clock, then this is the opposite of problematic, since this gives you easy moves which make you gain time.

If you’re playing with Japanese Byo-Yomi, then this neither makes it harder nor easier. You have the same time for every move.

The right side black group is dead, so is the bottom one.

The right side black group is dead, so is the bottom one.

Haha, yes, if you’re playing with Chinese rules, then instead of passing, @s00pern00ber , you can play J9: atari.

@s00pern00ber mentioned doing this in the game:

… and so on, until I got tired of it, and played played J9 instead of pass. So no problem in the actual game.

Not familiar with rulesets, but I think they are dead under any ruleset, otherwise it is really strange.

Black shouldn’t play A3 though right? They can just end the game with seki?

No, black is dead since the top right is dead. But if J8 had been a black stone, then yes it would have been a seki

Black shouldn’t play A3 though right? They can just end the game with seki?

It’s a legitimate question. If they can choose between ending the game with a seki, or playing an infinite cycle, what “should” black do?

If ending the game with a seki causes black to lose, then black can be expected to try to avoid that. So if we don’t want an infinite cycle, the rules should have a way to prevent the infinite cycle. We shouldn’t count on black choosing to lose.

As discussed above, Black loses (by potentially an infinite amount!) if they play the cycle.