This is the text I’m trying to edit: 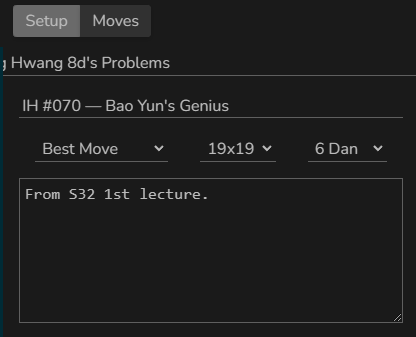 And this is the end result after publishing the text — note that S32 became PASS —: 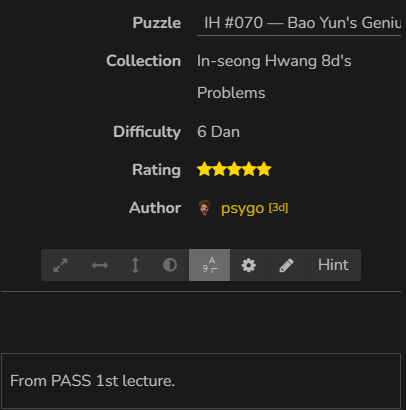 This is the puzzle, if you want to check it out.

It reminds me of this one, where a “pass” from KataGo is shown as Q19 on the board, because “pa” is how Q19 is encoded in SGF.

Yes, this is OGS’s bug. My guess is that OGS’s code attempts to implement the parsing of two different move encodings using the same code at the same time: GTP move encodings and which KataGo’s analysis engine also conforms to. This is the move encoding for the standard protocol for live Go engines, Go Text Protocol (which as an aside, was not forward-looking in a few different ways that make it unfortunate that it became the standard protocol). These moves look like “D3”, “Q16”,… and where t…

This somehow feels like the reverse situation, where something looks a bit like coordinates turns into a pass… what happens with a slightly different number or letter, is S32 special?

(Edit: Perhaps it’s worth mentioning that the reason coordinates are given special treatment here is because they are automatically changed when you flip/rotate a puzzle, a very nifty feature but kind of inevitable to lead to some humorous mistake eventually, as not everything that looks like coordinates is)

OGS automatically converts text that looks like move coordinates into clickable links. S32 is a coordinate that would be off the board. I guess the system is interpreting such an impossible move as a pass.

I don’t know if it’s exactly the game chat code that would be called, but I can imagine it being similar

There it looks like if the number is bigger than the height or width then it returns -1 which I imagine being turned into a pass.

I guess what is needed is some kind of escape character to indicate that what is coming up is not in fact coordinates, i.e. you could write \S32 and it would be displayed as S32.

If the coordinates are not on the board, like in this case, then escaping it automatically seems best.

Escaping would also be useful for the words “black” and “white” which are automatically exchanged when colors are inverted (and any other words that are given special treatment, perhaps “top”, “right” etc. are detected and changed automatically? although “right” would be especially prone to funny mistakes… “A5 is the right move here” → “A5 is the bottom move here”

Took the words out of my mouth. I was going to suggest some sort of escape character as well…