Hi folks,
I know 4th line territory can sometimes be wishful thinking. In this game I played White; you’ll see starting at move 53 my opponent was able to invade on the bottom. Is there a sequence of moves for White to protect the bottom after move 53, or was the territory simply too big to protect? 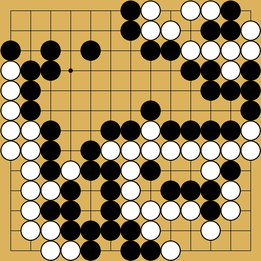 The invasion looks unreasonable to me.

If you block without touching his invading stone (say at E2) instead of connecting, it becomes hard for him to live. His group on the right is dead and not much use as a way out.

A different way to look at it is to ask, why connect? I think your opponent talked you into something

(You need to look after the liberties on your stones in the corner, but it should be OK.)

Yah, there is. Posted the variations in the game.