I’ve done a lot of improvements on the score estimator and the new changes are now live, for estimation purposes only (ie, not for automatic scoring with bots - yet). It’s still far from perfect, but it is performing much better from what I can tell. I’d love to hear some feedback on whether folks think it’s better or worse though

If the consensus is that things look better, especially towards the end game, I’ll begin using it for the automatic scoring as well.

What a sweet unexpected surprise! Thank you, anoek

Slightly less off-topic - what do you think about making the score estimator optional in the game menu, having it off by default?

General thought process there is that the score estimator is primarily a kibitzer tool, and if you’re going to enable it for spectators anyways, might as well enable it for the players. It’s not like it’ll ever be a good tool for indicating good invasion points or “what’s really alive or dead” kinda questions so, meh?

So, does this mean that we’re no longer the best server for teaching/forcing players to count the score themselves? XD

Thank you so much for fixing it!!

Actually, that could be an issue. The better the score estimator, the better it answers this kind of questions.
In particular, it has a huge influence on decisions like: “should I invade this moyo, or just lighly reduce from the outside”, which are critical part of the game of go.

Because of that, I think it’d be best to not enable score estimator to the players during the game. It’s a great tool for spectators and review, but shouldn’t go further. “Might as well enable it for the players” -> Not at all, where does that come from?

Because of that, I think it’d be best to not enable score estimator to the players during the game. It’s a great tool for spectators and review, but shouldn’t go further.

I agree. It should certainly be disabled during the game if analysis is disabled. Having it available for spectators and review would be beneficial.

A feature that I’d like to see is to be able to state that a stone is alive.
We can change status of a stone from alive to dead by clicking it (with ctrl or shift or something, that’s not clear, but usually works) but I can’t say to SE that E7 and E8 are not dead (see picture). 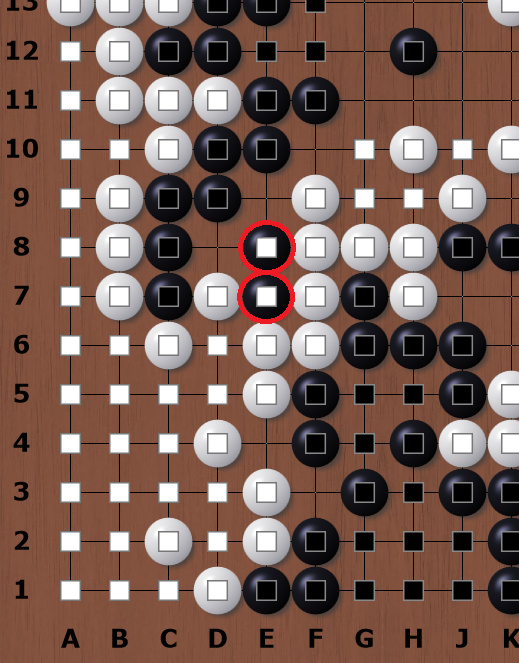 +1 on the idea of making the score estimator optional. Moreso than pointing out best invasion points or whatnot, I think it makes it easy to say “I’m up by 10, and the estimator looks correct, so I can play it safe in endgame.” Players should be responsible for coming to that conclusion based on their own counting, and there’s certainly no score estimator available OTB. I think the following would be great future changes:

don’t know if this is the new “improvement”, but here’s some negative feedback… 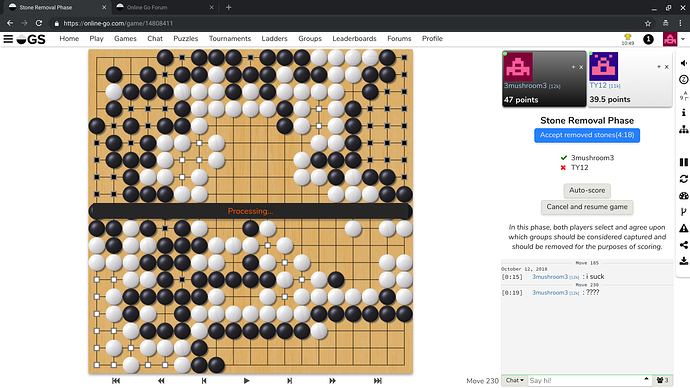 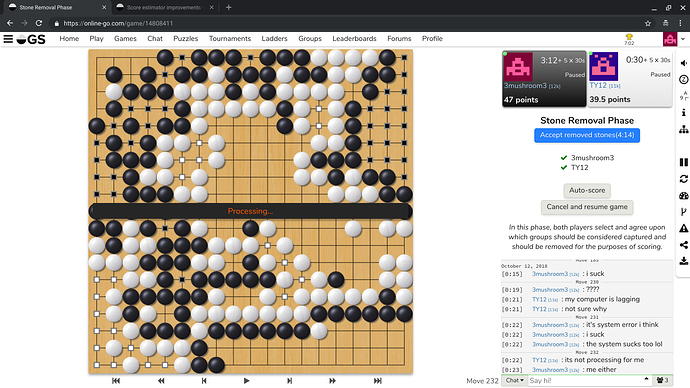 Just FYI: I just had the same issue as mushroom.

Shoot, unreleated breakage, i forgot to put some new files where they needed to be. It should work now (you might need to shift-reload though)

+1 on making it an optional feature in a game (would love to see it disabled along with ‘analysis’) if desired. I agree, the better it gets, the more it deprives players of the need to make strategic decisions informed by their own counting.

There is also a suggestion that score estimator should be optional when defining a match on the user voice. You can add your vote there.

I don’t know if you ever happened to check my score estimate experiments in my fork, I tried to better handle seki, but I think someone else experimented with it and found it didn’t work as well as I’d hoped. What I did was make the random playouts a two step process. Do it like now, then start again with all high confidence spots already marked the right color and do the playout again. If on second pass there were still uncertain spots, leave them empty as seki.

Maybe not something to worry about since it did make things too slow and wasn’t super reliable. Was just an attempt I made lol.

I think I also had toyed with trying to directly support Chinese scoring in the score estimator. Doesn’t it score all games as Japanese currently? (Only time this matters I think is for seki.)

I think I also had toyed with trying to directly support Chinese scoring in the score estimator. Doesn’t it score all games as Japanese currently? (Only time this matters I think is for seki.)

Think you have that the other way around. Pretty sure it currently scores everything as Chinese.

My attempts at doing a two pass system also tended to result in worse results overall, though I’m not convinced it’s still not a good idea in some situations or on a certain part of the board.

The Chinese vs Japanese is referring to whether we mark territory in seki as dead or not, and I think what we need to do is not mark it as dead in the score estimator, then let the actual scoring algorithm deal with whether we score those or not.