The game ended like this with white did not see it should have connected at blue position and black did not capture. Curious by rule, how this is supposed to scored? Similarly, what if a ko left unconnected? Seems the answer is simple, but want to make sure. 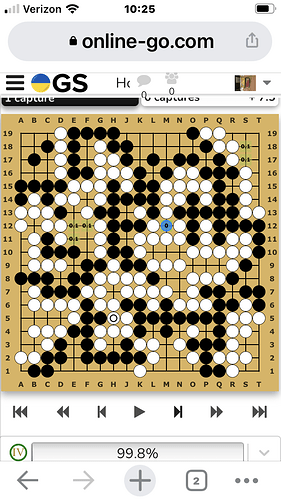 I think if black doesn’t see it either, m12 is an extra point for white

Was this under Japanese rules? Is that capture big enough to swing the outcome of the game?

If both are true, then the game should technically be declared as both players lose.

Is that capture big enough to swing the outcome of the game?

But is that really a rule in Japanese? Does that depend on both players agreeing white is dead undecided?

Is there some functional difference between “both lose” and “both win” that I’m not seeing? Because one seems an awful lot more disappointing than the other.

But is that really a rule in Japanese?

Yes, both players lose is an explicitly stated possibility under the official Japanese rules.

Both Players Lose The Japanese rules state: Article 13. Both players lose 1. After the game stops according to Article 9, if the players find an effective move, which would affect the result of the game, and therefore cannot agree to end the game, both players lose. Note that article 9 (about resuming the game) also applies: Article 9. End of the game … 3. If a player requests resumption of a stopped game, his opponent must oblige and has the right to play first. In the official comment…

I’m not aware of it ever happening in a professional level game. I imagine that in most casual games, even though it does occasionally happen, the players are unlikely to be aware of this technicality and resolve it some other way.

Does that depend on both players agreeing white is dead?

Both players could still always misunderstand the life and death status of something, like maybe they both think and agree that something is either dead or alive, while it is actually still unsettled. In that case, the game would likely just end with mistaken scoring rather than them ever becoming aware that they should have had a both players lose situation (unless some arbiter steps in to help clarify).

Is there some functional difference between “both lose” and “both win” that I’m not seeing?

My belief is that the judgement is meant to specifically punish both players. I guess in some tournament scenarios, it would mean that neither player gets points or that they are both eliminated (in elimination formats).

The game is finished when both players agree that there are no more worthwhile moves. ‘Dead’ stones may then be removed from the board by mutual agreement. If they cannot agree which stones are dead they must play on. If they cannot then agree who shall move next, all stones stay on the board (are alive) and are counted.

You missed an important third thing needs to be true for both players to lose: they both want to resume the game but don’t want to be the ones to request the resumption because then the other gets to play first. They are perfectly entitled to score the game as is with the white stones alive and white winning. This could be better for black than both losing due to SOS tiebreaks.

Is there some functional difference between “both lose” and “both win” that I’m not seeing?

Both win is far too easy to abuse to cheat.

This could be better for black than both losing due to SOS tiebreaks.

Is this something that has happened in some tournaments?

I’m curious about the history of these ever being recorded in serious play. Has anyone here seen a tournament game end with both players lose?

On the OGS site, there is no official support for actually handling both players lose. I’m not sure exactly how we would even handle it.

Not a both lose, but I do recall an incident with a declined win in the 2010 British Open. Andrew Kay ran out of time versus Yunlong Liu in an exciting undecided middle game position. Yunlong didn’t want to take the win but continue. They did, without delaying the round, and Andrew won. Yunlong recorded the result as Andrew winning. T Mark Hall objected, his tournament placing would have been better with Yunlong winning. Checking EGD now shows Andrew winning (he won the tournament with all wins) so it appears the players wishes trumped the rules.

Andrew Kay ran out of time

If I were TD here, I’d let either Yunlong win or both lose at Yunlong’s discretion. They can complete the game later if they wish but under no circumstances would I allow Andrew to be recorded as winning a round he timed out in. What an insult. Why even have clocks at all? Ludicrous.

Yeah, I agree. I think it’s disrespectful to the other players, especially as it could be abused to disadvantage another player, depending on the tournament format.

slightly related to the possibility of “both lose”, there is a 1928 professional game (before the modern japanese rules were formed) that peculiarly resulted in “white wins… but black does not lose”, as a consequence of a thousand year ko. 10000 Year Ko — The Magic of Go Game #7 - YouTube