I am not sure if I should post this on support, or other section, or to attach it to a thread with similar content. There are a lot of similar issues reported, but not really like this. Anyway, if is wrong place here, it can be moved later.

The problem is that scoring added one more point for black in a finished game. It did not reversed the score, but it could if white was ahead with only half a point.

The game is https://online-go.com/game/25089366, and as we see is stated that white won by half a point, when actually won by 1.5 points. I counted multiple times, and even asked help in counting, and two other players confirmed that I do not hallucinate. The wrong scoring is for black, because it is stated that finished with 71 points, when actually are only 70 (Later edit we can count 64 points on board, intersections and prisoners left on board, plus 6 prisoners as stated on the right. I replayed the game and yes only 6 prisoners were lifted, so is not that counter wrong). One of those who looked at the game pointed out that there are 3 dame marked and one unmarked. Is Japanese rules so this should not matter.

After pointing out this issue I noticed too that the white stone in top right corner is transparent, as are the prisoners left on board, even is part of a living group. I assume that the two issues are related.

The bug did not changed the score in this case, but I still report it because it seems to me that is a serious matter. Also I am really curious if this happened before.

Where is the discrepancy?

Edit: yes, okay it looks like black had only 6 captures before scoring began. At the end of the game, 3 white stones on the board were dead, but that transparent white stone in the top-right might have been counted as an erroneous 10th prisoner for black.

Edit2: I checked the capture count. Black should have only been credited for 9 prisoners, but somehow the system has given them credit for 10. I think the transparent white stone at T19 is likely related to the erroneous capture counting. It definitely looks like a bug, and it makes no sense for a single stone to be marked as dead when firmly connected to other stones that are clearly marked as alive. 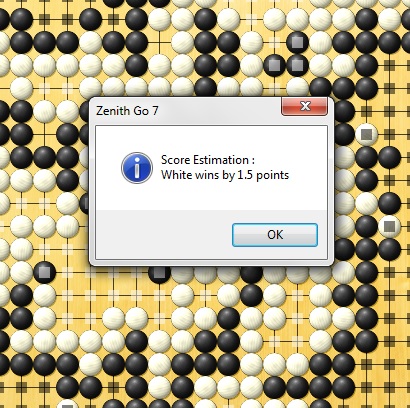 Thanks stone_defender for checking with other soft. I tried with cgoban, but weird, it cannot open the sgf even it worked fine with any other sgf saved from OGS. I assume that cgoban is horrified by what devilish thing is in that file and even do not dare to look in it :))

Like most moderators, I have seen a large number of misscores of various kinds, but I have never seen anything like this. It is notable that the T19 stone is counted as dead, but the territory beneath is not counted, contrary to the usual scoring of a dead stone. This suggests to me a one-time glitch rather than a bug per se (by which I mean something more systemic). It is also notable that the score estimator gets the score right. This mirrors the performance of the recent autoscore bug (involving areas that are not scored at all), in which the score estimator gets it right when the autoscore fails. I hope your experience is not a precursor to a larger problem. It does highlight the importance of checking the scoring of the board carefully before accepting. The developer, by the way, is working on a replacement for the autoscore system. Thank you for bringing this to our attention, as it is very useful for the moderation team to be on the lookout for this when dealing with a scoring issue.