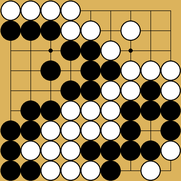 Someone had a question about the bottom right corner in the game above. I took a look and was surprised to see that the score for black would only be 13 if he were to capture the white stones - 4 less than the 17 he was given in the official score. It’s not surprising that black would lose points for filling in territory, but it should only be 2 points difference, not 4.

Is this a bug?

It’s only 2 point difference. If you refer to score estimation then you should know that it’s weird

seems to be randomly inaccurate.

Edit: aah I see you are using the player box score showing thing. This is really complicated as there are multiple places to “see” the score. It looks like it doesn’t show the correct territory for the stones that have been eaten.

It looks like it doesn’t show the correct territory for the stones that have been eaten.

Yeah, it seems so.