Hi I just played a game against a bot and I don’t understand why I lost. 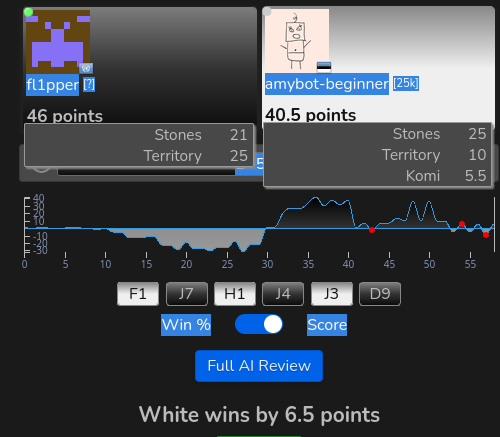 Can somebody please explain how I lost? 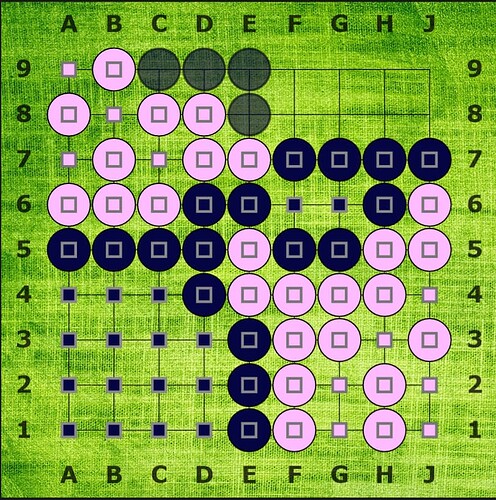 Thanks for explaining that. Still getting my head around when and why the game ends! I just looked at that area and thought it was done. I can see what you mean though and I will attempt to not do it again.

The problem is not solely yours. Yes that weakness is there but that area is also fully surrounded so it should be scored.

I think there might also be a weakness at D3 that is the reason the score estimator calls that upper black group dead even though it’s Black’s turn.

Here is what I think should have happened:

During writing I’ve realized #4 probably doesn’t apply because I think against bots there is only auto score, no manual scoring. Because of that you should have and you did ask for help.
Now I think the auto score should be overruled by a human being.

I seem to recall a dispute in a real game in some older Japanese rules with exactly the same shape, where Black also forgot to protect the weakness, but then White purposefully didn’t exploit the weakness, passed, then during scoring, argued that the Black stones were “dead” and that Black’s entire territory was worth zero point because of it.

he problem is not solely yours. Yes that weakness is there but that area is also fully surrounded so it should be scored.

I would say the problem is entirely due to a bug and not at all due to @fl1pper!

Thanks to everyone for explaining the problem to me, much appreciated.

Regarding bugs, it looks like the e9 group has been marked dead, so the “seki” is working as intended? If someone had clicked that L group, I think the top right would have turned black.

Is clicking even possible when one of the players is a bot?

Oh no, never mind then

I’m a pretty new player and use to run into things like this a few months ago. Had me scratching my head. I learned from experiences like yours to finish play. Filling in cutting points, continuing a line to the edge of the board, also one time i had a big area surrounded yet lost it apparently because i didn’t defend it enough inside the area by dropping a couple of stones inside. This is playing with bots.