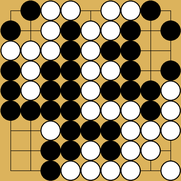 Actually I have asked the same matter on reddit.
but please allow me to ask here…

good explaination will be appreciated.
thanks

Yes, it is, since it’s completely surrounded by alive white stones.

so white doesn’t need to fill E9 to claim the upper left territory?

Yes. Black cannot do anything to kill the white stones, as B8 would be self atari. White, however, can, at their leisure, fill E9 then play B8, and capture black, and there is nothing Black can do about it. As such, the Black stones are regarded as dead, and all territory in the upper left and E9 is white.

so white doesn’t need to fill E9 to claim the upper left territory?

Why would white need to do that? In the scoring phase, dead stones can be removed without filling their liberties and capturing them.

Well yes, any situation where you would need approach moves to take dead stones off the board is an example.

But in all of those examples, you don’t need to take dead stones off the board before counting. So it’s all territory.

the player doesnt agree with you and still insists with his concept (or should I call misconception) about life and dead. you can see his answer on this puzzle https://online-go.com/demo/546579

Well, it should be determined by the hypothetical perfect play, although I agree that human players don’t always figure that out.

If they later find the perfect play, both players are declared losers.

I think the both players lose situation only applies in a narrower case where both players make a mistake large enough to change the outcome and where it would depend on who gets to play first after resuming the game.

In the particular case of the game discussed in this thread, it is only a scoring mistake that affects the game by a one point, which is not large enough to change the outcome. Crucially, the game is also finished with board plays, as no player should want to resume to play additional moves that could change the result.

both players are declared losers.

Not by the referees I think. Because if both players accept the outcome, that is final.
I guess we should take “declared losers” in the figurative sense.

(Or am I completely missing the point now?)

The official Japanese rules has an interesting quirk that it is possible for both players to lose,

Both Players Lose The Japanese rules state: Article 13. Both players lose 1. After the game stops according to Article 9, if the players find an effective move, which would affect the result of the game, and therefore cannot agree to end the game, both players lose. Note that article 9 (about resuming the game) also applies: Article 9. End of the game … 3. If a player requests resumption of a stopped game, his opponent must oblige and has the right to play first. In the official comment…

However, I don’t believe it applies in the situation of the game discussed in this thread.

I don’t know much about the different rulesets (Japanese, Chinese, Korean, etc.), so maybe I should do some studying.

You can check out my thread linked above to see some of the gory details about the Japanese rules, if you are so inclined.

However, the fine details aren’t really too important in practice, and it’s just a bunch of pointless pedantry. Even though area scoring and territory scoring seem quite different, they ultimately measure practically the same objective, just in a different, but complementary way. The differences between the rulesets don’t have a substantial impact on the strategy of the game (besides some rare, convoluted situations).

thanks for the link.
I hope the player on the game in this thread open that thread.