Scoring this 9x9 board

So I got myself confused about scoring. How would you count the score for this board under japanese rules? 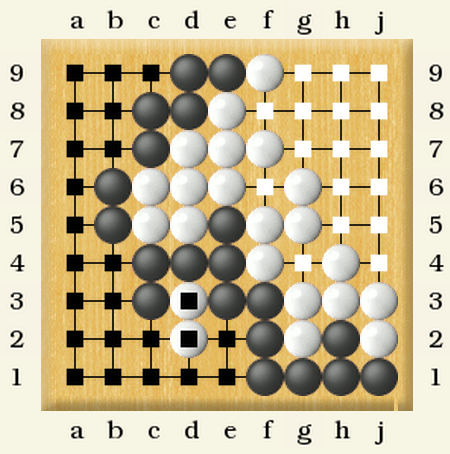 Thanks! That’s the answer I got:

So I’m still befuzzled by this game, played on DGS. Is it possible that such a simple board results in different scoring for chinese and japanese rulesets? I was under the impression that the scores were equivalent under most circumstances. But in this case, it’s off by 2. (B+2 under japanese, tie under chinese). Is that right? 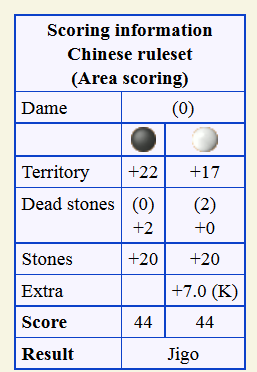 And that makes two(2) more points for white, so Jigo under both sets of rules.

Thank you! That resolves it. I thought I’d counted 20 black and 20 white stones on the board. Just goes to show how suggestible I can be, I guess.

OK, this gets richer. I looked at the game again, and white had 3 prisoners. There were 49 moves, so Black had an extra move. So Japanese score would be like this??

Assuming that’s right, is there any significance to the score difference? Or is it just an arbitrary small difference in how things are counted?

If that stone had been in Black territory, it would reduce the Black total by 1. Of course, it would be one less prisoner for White, so that balances out.

If this was under AGA rules, White would be required to pass one more time (as White must pass last). Since AGA also requires a pass stone to be given to the opponent for each pass, this would have us back at Jigo.

The conditions that result in differences are here. If White and Black play a different number of stones, there will likely be a difference. This difference usually doesn’t matter.