Shaking off a loss

I was curious to how people shake off the games that they lose? I know some people like to go from game to game even if they lose. But, what do others do to reset themselves after a loss or maybe not even a game they lost and instead won but played badly?

I normally play a few chess games to reset myself. What do you guys do?

I essentially only play correspondence so my problem is more how to shake off the feeling of losing that is persisting over weeks and months. Often I think that once I start feeling that I’m losing then it becomes a self fulfilling prophecy. And often if I could refocus, then likely as not my opponent might allow me back into the game but instead I just make things worse for myself.

In that regards correspondence is definitely worse - not losing the game per se, but that a losing postion drags out over days or even weeks for some games.

I just started playing correspondence for the first time. Now I am afraid of that happening :-).

I should probably add that by the time the loss is confirmed with the actual end of the game, it’s a sweet relief. A kind of closure.

I just started playing correspondence for the first time.

It trains you for the live games though. 95% of my games are correspondence, thus losing a live game is pretty mild in comparison.
Also, losing in a correspondence game can also be fun, since trying to turn the game feels like climbing a mountain.

I think that the easiest way to get over a defeat - let’s say it was a tournament game you were winning and you missed the snapback and now you are angry with your mistake - is to just go do something else, preferably something far more stressful than Go.
E.g. go play League of Legends, click “ranked”, pick something weird like Sejuani support or Riven adc, proceed to get horribly flamed for 20+ minutes straight, laugh at all those people losing their minds, lose that game too. After the 30 minutes this takes, you would have forgotten about the Go game loss, even if you had played the worst Go game in your life.

If that doesn’t work, I have a meme about what comes next: 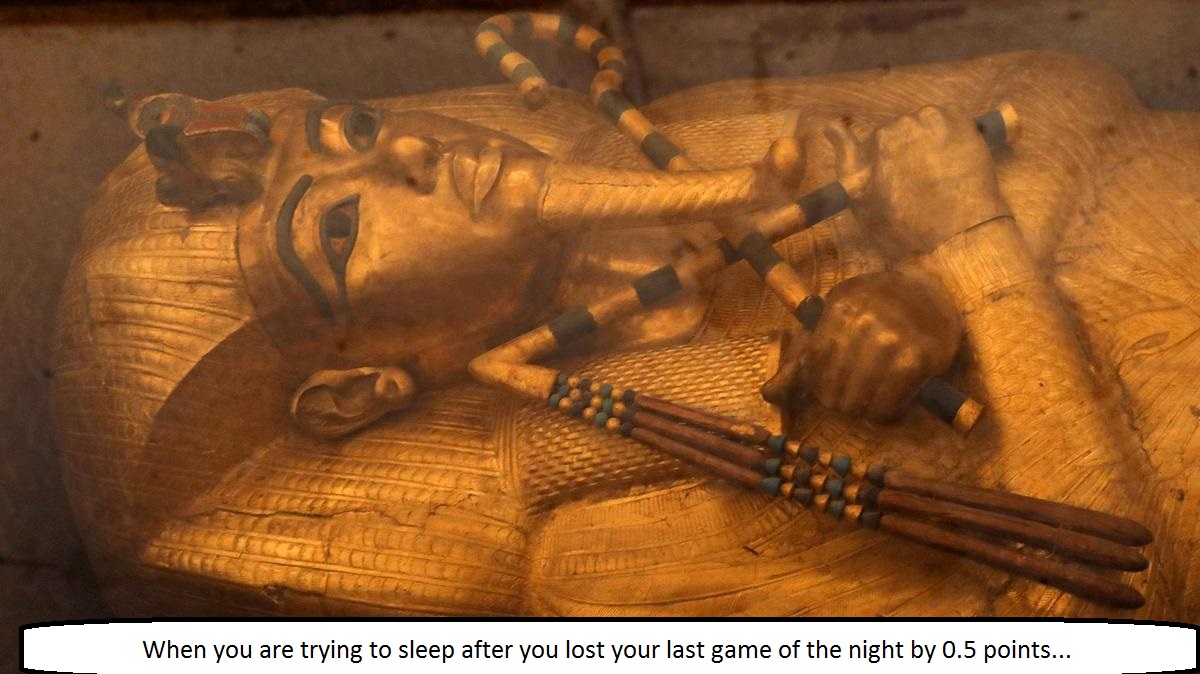 Don’t let that happen to you. Distract yourself with something else, before going to sleep

Ah so there is no misunderstanding I am fine in live games I am 4dOGS/8dFOX I only just started playing correspondence games on OGS for the first time.

This was more of a post of just curiosity of how others handle there losses and move on from them. I am generally okay with my method of playing a different game to shake off a loss but was interested in the mentality of others.

I think reviewing the game with someone helps, with the opponent with other friends or with the ai. Probably the first two more than ai.

I think it helps to figure out where it went wrong and what to improve on. People tell me to look at games as opportunities to improve

I review all of my games a day or two after I play them because if I do lose I will only dwell on the game when looking at it. I like to take time to accept the game happened so I can take in everything from it. (But, that’s me.)

“The pain I feel now is the happiness I had before. That’s the deal.”
― C.S. Lewis

I just grind down the losses in the overall sea of misery which is being stuck on a plateau for a long time and play another one.

I hope all these stones lost will add up to a nice little island where I can retire someday, lmao.

In most cases I don’t have to do anything to shake off a loss. It wears off quickly for me, like only a few seconds for a casual online game, or perhaps a couple of minutes for somewhat serious games.

Occasionally it will take longer, like an hour or more. But that’s only in important IRL tournament games where I felt it was a very undeserved loss/bad beat, like me having a huge lead for most of the game, and my opponent keeps playing on and on in a lost position, until I finally make a silly 100 point blunder. That can definitely get under my skin. But luckily such things only happen very rarely.

I should probably add that by the time the loss is confirmed with the actual end of the game, it’s a sweet relief. A kind of closure.

Where is the dislike button?

Change of mentality - do not play for the joy of winning, but simply for the joy of playing. If a game features an exciting fight or a complicated life and death in the corner situation or an epic ko and you have fun working it out, then does it even matter who wins? If you think about Go this way, then you will never have to shake off a loss ever again…

I think this is a mix of amazing and bad mentality arguably of course.

What I mean is that I have met a few people who apparently have been 10kyu and below for years but still enjoy the game. I think that its really cool that they can remain happy like that. As someone who is competitive I wouldn’t be able to.

But, I think that part of what makes go fun for me is that it is a competitive game. Being upset over losing and being happy when winning is part of what makes the game fun. If I never have to shake off a loss ever again then I would probably rather quit playing since it no longer has any effect on my mental.

So I say amazing mentality because I think its hard to retain the enjoyment of a game if you are losing constantly so anyone that can do that is amazing.

While I say bad mentality because I think that it shouldn’t be assumed that shaking off a loss is a bad thing as it helps your improvement in many ways.