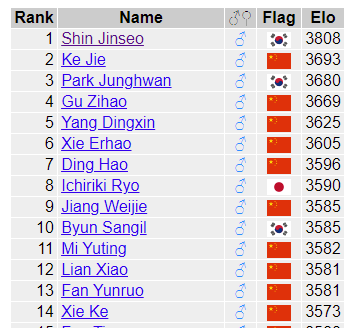 It’s interesting, but those ratings have to be taken with a pinch of salt.

For instance, Ichiriki Ryo is being called World #8, but a World top ten player should have won an international title at least once, no?

The players currently fighting for the MLily Cup, Mi Yuting and Xie Ke, are both outside this “top ten”.

On the topic of “shinpremacy”, I also feel that Shin Minjun is greatly underrrated at 26. He appears to me to be a top ten player, and certainly not outside the top twenty.

A topic like this deserve some incredible games with commentary.
Anyone?

At the very top, rating does not count, only title does. In this sense, at this moment both Shin and Ke are not doing well.

Where can one find out the list of current holders of the various Go pro league / tournament titles?

So I contest the idea that Ke Jie isn’t doing well on titles.

(Although last Samsung Cup, ofc, had the misclick controversy and could’ve been won by SJS.)

Apart from arguably losing the Samsung Cup unfairly, Shin Jinseo crushed Park Junghwan 7–0 in an international title straight afterwards. I think, then, that it’s a bit unjust to say that SJS is doing poorly on titles either.

And where can we watch the MLily Cup final?

No, I was not referring Shin or Ke’s overall achievement, but rather recent tournament results. Ke won one last year, but have not gone into finals of several tournaments. Shin is even worse.

I am watching the commentation of the last game right now.

Michael Redmond commentated all the games on youtube, apart from #4.

Btw, Fox seems to broadcast all major games without commentation.

Watched another mediocre performance and loss of Ke in China A league, where Shin is doing so well, except a loss to Ke with a so called amateur misread by the chinese pro commentator.

A comment also reveals how anti AI cheating works. Once players enter the match room by 11:00am, they are not allowed to go out for lunch break like in the old days. Snacks are provided.