Would it be possible to show captured stones as ‘ghosts’ for one move only - that is, those stones captured by your opponent on their last move show as half-opaque stones to show you what you’ve lost. It would help recognise Ko moves and act as a bit of reminder of what the board looked like before your last move…

I think the board should mimic a real go board as much as possible. Ghost stones would only make it more complicated.
Ko moves should be marked with a square though (KGS is doing that) because it makes no sense not to mark the ko move and then give an error when player tries to move there.

I’m honestly not a fan of either of these in general. It seems like a bit of a crutch, and an unnecessary UI addition.

I think the board should mimic a real go board as much as possible.

That’s what I would prefer for live games. For slowly going correspondence games I find it more convenient when the board mimics a printed game record.
I like how DGS does it: 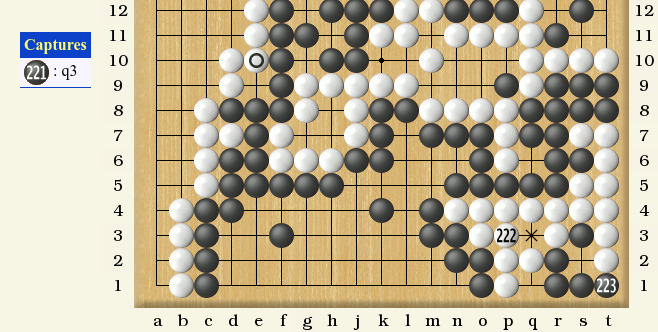 (this could have been also an illustration for the “desperate moves” thread but, well, this Black is 23k.)

So ideally I’d like to be able to select different board styles for different game types. But that’s a feature that is very low in my priority list. I’d rather see the devs fixing some long-standing bugs.