Soooo when does game 2 start…?

I will be the arbiter. Our setup supports any even number of players. Please vote in the following polls if you want to participate.

Do you want to play?

Which board size do you prefer?

Players should be ready to submit a move about every 48 hours. In case somebody forgets to submit, the round is extended. If somebody is unavailable for a few weeks, we’ll pause and continue afterwards.

(I probably won’t play in either case, but:)

Will it still be, first repetition of position ends the game?
Switching to second would make the, sprinkle stones around in case
the game accidentally ends early, tactic significantly less relevant.

Until the lategame, I believe it is very unlikely that a repetition occurs. So it is up for debate how relevant this tactic is, even with the current rules.
However I’m not against changing the rules if the players wish to.

Under what condition should the game end?

I feel (not strongly) like the game should end by agreement - either one team resigning, or all players agreeing to a draw. I don’t think there is a need for a killswitch.

Jon_Ko, note that your idea is different from what I
was bringing up and the middle option of martin’s poll:

X,X,Y,Y is 2 repetitions, but not a position occurring for the third time.
​
​
Is the difference intentional?

Yes, that was my intention. We need a rule for repetitions to prevent an endless game, but a few repetitions are not a problem, right? So I don’t think the rules have to be that strict.

But I will change my vote to “none of the above”, so it reflects my opinion.

Addendum:
The difference from normal go is, that a player doesn’t know, whether their move will lead to a repetition, so a repetition can happen by accident. Allowing each board position to be repeated once ensures that once a cycle has been broken players don’t have to worry about such accidental repetitions and it still prevents the game from getting stuck.

I did not realise the ambiguity at the time - my bad. My intention was

“when [the board position repeats] for the second time

I’ll follow @Jon_Ko in choosing “None of the above”, then.

If everybody is happy with @Jon_Ko s suggestion, we’ll go with that. I just hope we can find a rule that all players can agree to.

I don’t really understand the implications of these rules since I haven’t played before, so I’m good with anything!

I don’t really understand the implications of these rules since I haven’t played before, so I’m good with anything!

The game ends when one team resigns with unanimous agreement or when the board position repeats itself (for example due to all players passing). In the latter case we proceed to counting (unless all players agree to keep playing).
Teams receive points for all stones of their team colour, as well as their territories. A maximal connected set of empty intersections is called a territory of a colour if all adjacent stones feature this colour. All intersections in a territory count as one point.

That means each team had a score at any given round during the game. In case of a repetition the team who was ahead according to those scores could insist to go to counting and win the game, even though the other team might have had more potential territory.

So the team which would’ve lost, if the game had gone to counting immediately, had to make sure to avoid any repetition of the board. That’s why I’ve played B2 in game #1, to contest white’s whole lower left corner, which would have been solid territory without the black B2 stone. With B2 white had to worry about repetitions instead of black.

Now rereading the rules brought something else to my attention:

A maximal connected set of empty intersections is called a territory of a colour if all adjacent stones feature this colour.

@martin3141, is it by intention, that a stone at the border of a territory with multiple (or all) team colors does not neutralize the territory? 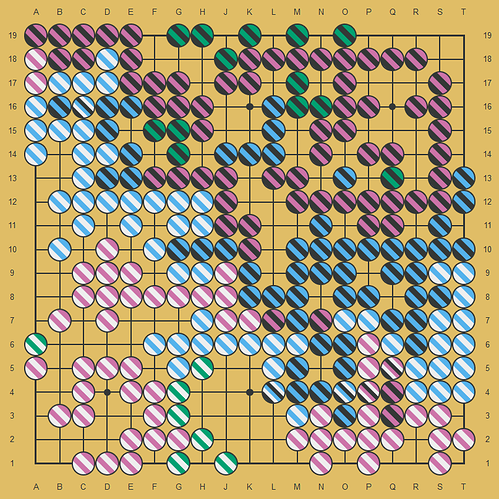 grafik807×807 101 KB
If I understand correctly, the (maximal connected set of) empty intersections around L4 here would be counted as white territory, which seems counterintuitive to me, because black is “poking” through white’s surrounding stones.
5 Likes
martin3141 July 16, 2022, 2:59pm #15

@martin3141, is it by intention, that a stone at the border of a territory with multiple (or all) team colors does not neutralize the territory?

Yes it is intended. I thought about alternatives, but (so far) this makes the most sense to me.

In your example team black can still contest the territory around L4, so it is unlikely that the game would end in such a position.

I see. I was thinking of

A maximal connected set of empty intersections is called a territory of a team if no adjacent stones feature another team’s color.

But that might lead to some undesirable edge cases too.

We can also go with that for this game.

I’d go with the current definition, to have it consistent with other forms of this variant.

I am happy that we have 6 participants, which has proven to be a good number

So lets start the game. In the order that the votes appear for me (Shinuito, Jon_Ko, Vsotvep, Maharani, benjito, mafidufa) I will have discobot roll a die where the result is X, and the person is assigned the X-th number from 1-6 that hasn’t been chosen yet. Team black is all players with odd number, team white is even. Furthermore these share a colour: {1, 2}, {3, 4}, {5, 6}.