I work for my local anime con in their board game department. Last year we ran hanafuda demos, and this coming year I’d like to teach go. I’m looking for a board size that can teach the game and finish in 10-15 minutes that isn’t solved (i.e. 5x5 is solved, so I don’t think it will be overly useful, unless we play white and take dives for our attendees.)

I’m hoping 6x6 is a decent size, because then the board can double as a 5x5 mini shogi board. I downloaded a 6x6 game for Android. I might just be bad at this game because I keep losing, and by a lot. In your experience, is 6x6 useful? What is the komi for this size?

5x5 is only solved in the same sense as connect 4.

Unless you know all the variations you won’t reach the optimum end point.

Odd boards are preferable. Games play weird without the midpoints.

6x6 is definitely useful, and in Japan you can find 6x6 sets for children.

5x5 is a terrible board size, not just because it is “theoretically solved”, but because Black 's first move in the center of the board pretty much ends the game immediately.

As for komi: probably 3 for territory-scoring and 4 for area-scoring.
Useful discussions about it:

What is the komi for this size?

Komi is essentially meaningless for complete beginners. Don’t add an extra thing you need to explain.

I’ve taught many complete beginners on 9x9, is there a certain reason you think this would be too big?

Odd boards are preferable. Games play weird without the midpoints.

I disagree. On a small odd board such as 5x5 or 7x7, playing at the centre of the board on the first move is way too powerful and gives too much of an advantage for black. Playing on an even board size such as 6x6 gets rid of this obvious strategy and can lead to a more interesting game.

Also, are you sure you want to start with go directly, and not focus on capture-go first?

Capture-go ignores territories and instead focuses on capturing. I think its a more intuitive first-step.

Are you really asking what is the “smallest possible useful game for teaching” but then denying the power of the 4x4 Go Board? At least Cho U (winner of every major Japanese Go title) disagrees. Cho U made an introductory 4x4 go board to teach children Go using apples on a tree, he made a 4x4 set with introductory tsumego for adults, and he wrote another 4x4 tsumego book that gets difficult at the end (for SDK). I think 4x4 is the “smallest possible useful game for teaching.” In 4x4 go, everything is a corner, there are 4 2-2 points and 8 2-1 points – it can get wild. But it is also simple enough for teaching as shown in the various examples in Cho’s books.

But, if you are actually asking “what board should I get for giving demos?” – then I recommend picking up a 9x9 board because they are cheap and easy to find.

By the way, I like Cho U’s teaching style – focusing on fundamental concepts. I know these concepts but even I learned a thing or two from the children’s book.
I also like how Cho U simplified tsumego techniques:

3-star techniques:
7. Ishinoshita (under the stones)
8. The center is the vital point of a symmetrical shape
9. Semeai (capturing race) with nakade. Take the vital point without making eyes.

4x4 examples curtesy of Cho U – Black to play: 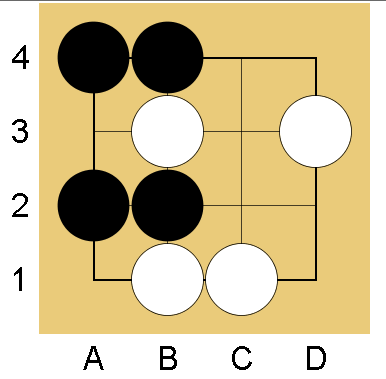 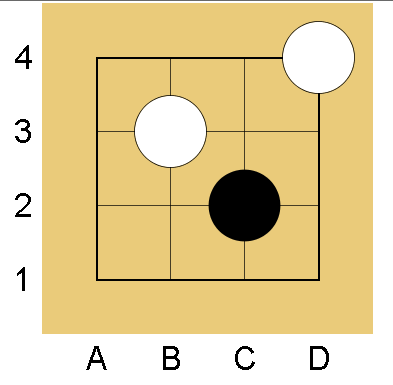 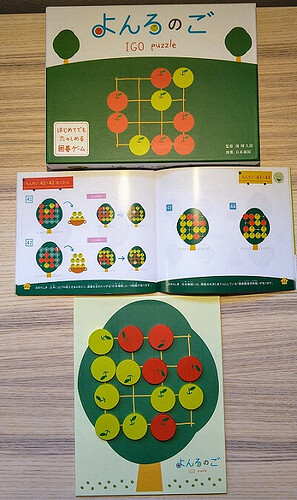 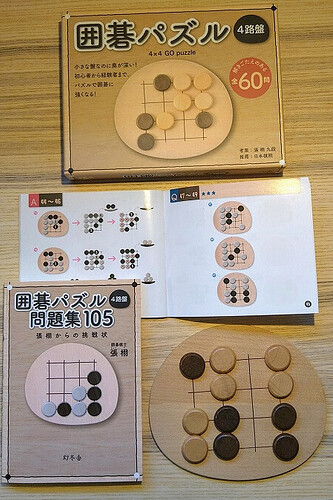 (I don’t know about usefulness for teaching, but:)

@ArsenLapin1
To get a good game on 5x5, one adds the rule that on Black’s first turn, Black is not allowed to
play the center intersection. ​ ​ ​ In this case, my understanding is that komi should be 2.5 or ​ 3.5 .

I feel a bit like a broken record because I’ve raised this concern before - but I’m going to be a tiny bit contrarian and raise it again.

When you train beginners exclusively on small boards (and avoid any mention of 13x13 or 19x19 play) - what lessons are you actually teaching them?

On one hand, I agree that starting 30kyu players on the 19x19 can be confusing and overwhelming. Playing on a 9x9 is a good way to introduce concepts like

However, because of the nature of small boards, the lessons that beginners absorb leave out what I feel are really important aspects of the game, mainly

So yes, I agree that study of the 9x9 / tsumego / life & death can all be very useful learning tools - but only as part of a balanced diet that includes these other elements which only come into play on larger boards.

When those elements are missing - well, let’s just say I see a lot of 20-25kyu players trying their luck on larger boards and using the same narrow tactics they learned for the 9x9 - mainly

To try to focus this down to a single nugget - I feel that studying smaller boards forces the student to focus on TACTICS while the study of larger boards forces that student to zoom out and understand the broad-sweep of STRATEGY which informs those tactics. I don’t believe that one can become a well-rounded Go student without understanding the interplay of tactics and strategy, and I’m always concerned when people over-focus on one at the expense of the other.

My 2 cents - your mileage may vary - void where prohibited - some cars not for use with some sets - contents may settle during shipping.

I think that the key factor that overrides all your great points that I agree with is the one of “time”.

If you have 15 minutes to show someone what go feels like, 19x19 is out of the question.

And this is not an unrealistic scenario … in this scenario, the OP’s question makes sense.

Time is a pretty big factor here. We’ve only got about 40 hours of operation to teach a convention of ~9000 attendees. Granted, no, they won’t all want a demo, but a game demo has to give enough of a feel for the game to get them interested. I’ll look at the 4x4 board, maybe run through a fast 4x4 then a quick 6x6.

Part of the plan involves getting or making these 6x6 boards, 3D printing stones and shogi pieces, then either selling them as a mini kit or giving them away as prizes.

Thank you for all your input. I’ll be back as I figure some of this stuff out.

If you do not mind a suggestion, you could use smaller boards for the fast demo, but give out a more standard (and more interesting) 9x9 board as a prize. This might get the best of both worlds and give the people incentive to go explore the game when they reach home instead of thinking “hey, I just saw how this works, let’s put it on a shelf”

I think that the key factor that overrides all your great points that I agree with is the one of “time”.

If you have 15 minutes to show someone what go feels like, 19x19 is out of the question.

And this is not an unrealistic scenario … in this scenario, the OP’s question makes sense.

I completely agree with this, and I’ll add that even if you have 15 years to teach someone go, these 15 years don’t happen all at once, and they begin by their first 15 minutes. There is no urgency to rush for 19x19 when there are so many important things to be learned on smaller boards first.

@tonybe , you are mentioning quite a lot of strategic concepts. Those are all pretty advanced. Yes, it is true that not all of those concepts can be taught in the twinkling of an eye on a 9x9. That doesn’t make the 9x9 any less useful as a learning tool.

Do you really want to tell a beginner that their moves are not “efficient” enough in their first games? Do you want to talk about “pursuing local fights and when to tenuki” when they haven’t experienced a full fight on their own yet? Do you want to explain influence when they can’t even close their territory properly yet?

You’re creating a false dichotomy. Just because a beginner learns on a small board, doesn’t mean they can’t later learn on a bigger board. It is okay to leave out a few “aspects of the game”.

In fact, the game is so deep that no matter how long you have been playing, there are many aspects of the game that even you still don’t know about!

I wouldn’t use a 3d-printer for go stones. That sounds pretty expensive and inefficient. Go stones are much more simple than pieces from other games. They’re basically just flat marbles / glass beads, or something even cheaper like wood or plastic tokens.

Hi - I agree with a lot of the things you’re saying and - I’m kind of bashful to admit that my eyes skipped over the 15 minute time limit in the top post. So yes, it’s fair to say that perhaps I “protest too much”. I wish the discussion of small vs big boards for teaching wasn’t so either/or – maybe an either/and model would work best?

I guess part of my beliefs were shaped by encountering 20-25kyu players who wanted some teaching / assistance from an intermediate player, but who had formed these very firm opinions that I mentioned about starting with the middle and contact fighting to the end, and I found that trying to show them the underlying efficiencies of the game was more of an uphill battle because of it.

As to your other question - what if I do only have a short time to demonstrate the game to a beginner, and how would I demonstrate efficiency? One of my favorite exercises is to give a beginner only 25 stones and let them know that we’re only going to play the Opening part of the game.

Time and time again, I’ve seen them over-focus on securing the first corner they claim, and getting emotionally attached to it as “My Corner” - usually either ignoring the rest of the board or spending too many stones contact fighting over a small area when there’s unclaimed potential available.

When the first 50 moves are done, and they zoom out and take a look, they are often surprised to realize how much of an advantage they gave their opponent by over-focusing, and that sometimes makes an interesting light-bulb go off in their heads.

Again, maybe this is just my experience, but I’ve found it to be an interesting exercise.