Does anyone have solutions for the GO basic learning puzzles. I am trying to learn the game but I am very confused by the puzzles Ko ! #4 and Seki! #4. I have tried many moves after the first but I can’t seem to figure it out. Are there solutions somewhere… if so please send me a msg at ep95060@gmail.com. Thank you

Do you mean this one 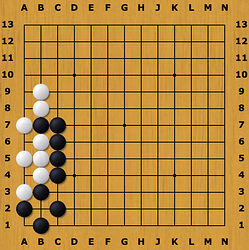 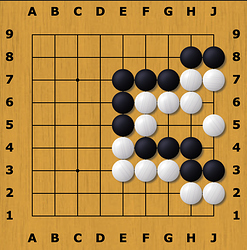 from the tutorial on the OGS site, or are you talking about some other puzzles?

For the first one: The puzzle statement tells that white just captured a stone with A3. So the situation on the board before the last move was as follows: 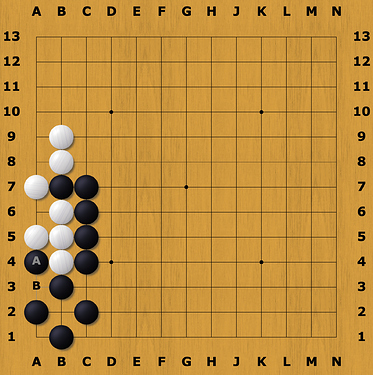 White can capture the stone marked by ( A ) by playing at ( B ). The game will then look as in the puzzle: 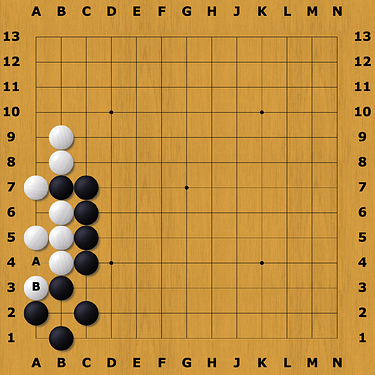 Now, black can take back the white stone at ( B ), but not immediately: this situation is a ko. If black captures the stone at ( B ) immediately by playing at ( A ), then the board position would be repeated, which is not allowed. Thus instead black has to play somewhere else, for example at A8: 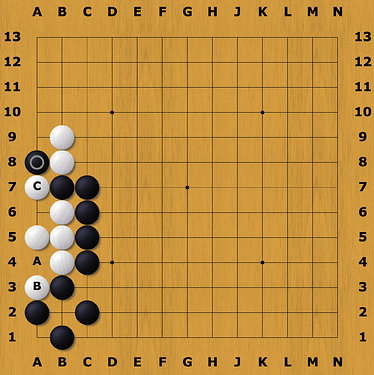 Now the stone at ( C ) is under attack and can be captured by black if white does not do something about it. So white will play at A9: 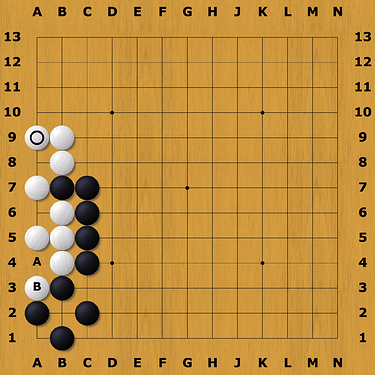 But look, the board position is different than it was in the beginning of the puzzle! So that means that black can now capture the ko by playing at ( A ): 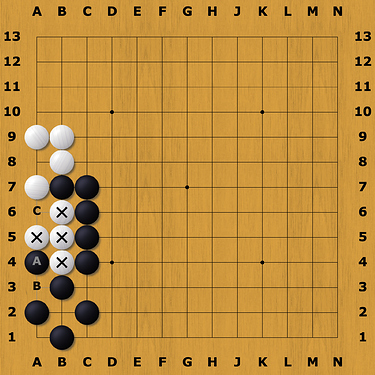 Note that white cannot capture the stone at ( A ), once again because this would repeat the previous board position, which is not allowed by the ko rule. Thus whatever white does, black will be able to play at ( C ) to capture the four marked stones, thereby ending the ko fight. 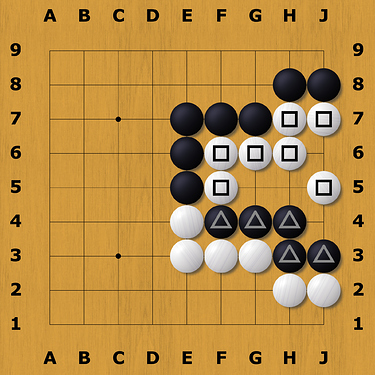 Both groups are struggling to capture the other group, and neither group is alive (since they do not have two eyes). Black has three possible moves: G5, H5 and J4. Let’s explore them all.

If black plays at G5, then the black stones only have two liberties left (marked): 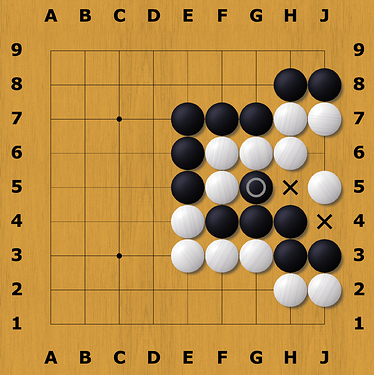 White can take away one of the liberties and make an eye at J6: 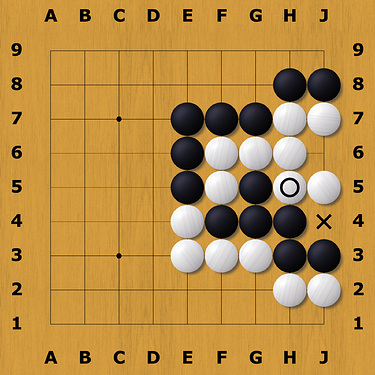 If black plays J4, the situation is very similar to what happened before. White can play at H5 to make an eye, which will mean that the black group has only one liberty and the white group has two: 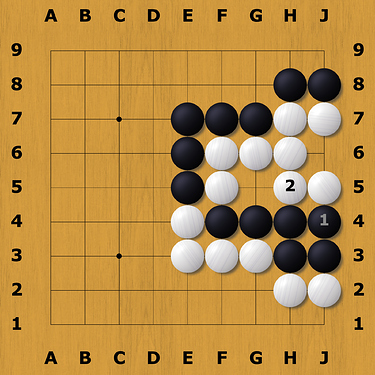 So again, the black group will get captured.

Finally there is H5 for black: 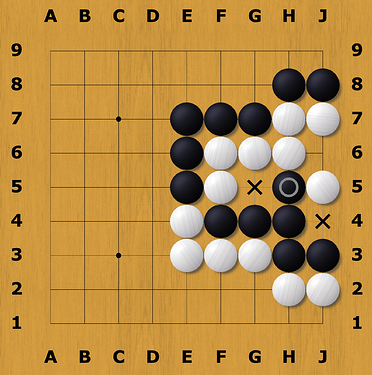 In the black case, this is easy to see. If black plays either at G5 or at J4, it will remove one of its liberties, and thus it can be captured immediately by white. For example if black plays G5, then white can kill the group by playing J4.

In the white case it is a little bit trickier. First of all white can not play G5, since it will only have one liberty left: 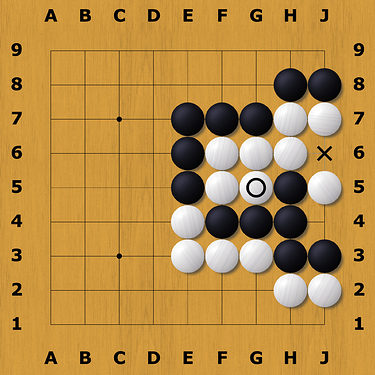 White can also not play J4, since this will eventually repeat the board position. First white plays J4: 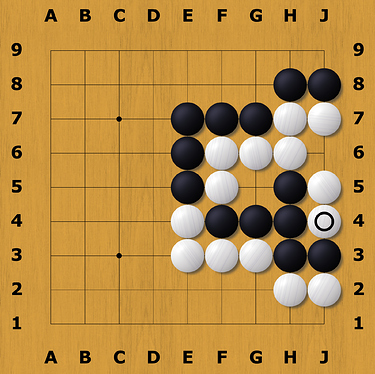 Then black captures with J6: 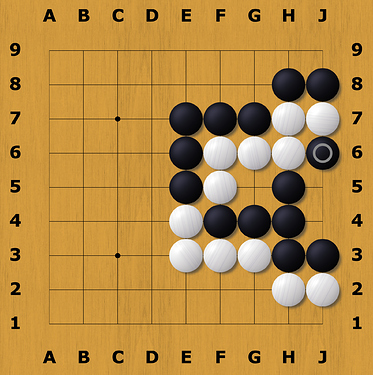 And with white J5 we’re back at the start: 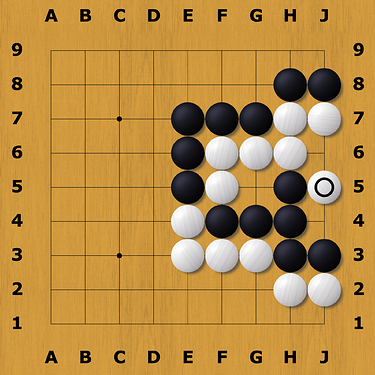 Moreover, in doing so black has captured two white stones, but white has only captured a single black stone, and it is now blacks turn: so playing at J4 is basically the same as both passing and giving the opponent a free point. 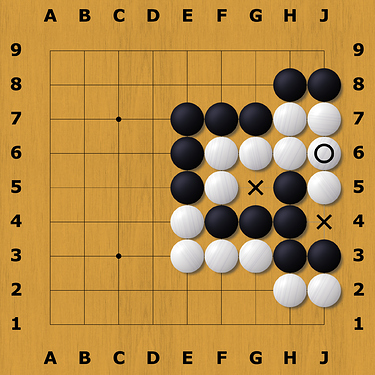 This means that both the black and the white groups have only two liberties left, but both liberties are shared by both groups. If one player fills a liberty, their group will get captured when the other player plays at the other liberty. This is a very typical case of seki: Neither group can capture the other.

Note that J6 also does not improve the situation for white, so playing there is essentially a wasted move. It is better for white to play somewhere else, outside of the seki (for example at C4).

Many Tsumego (puzzles about live and death) come without solutions. Some even come without a defined outcome (your lists the desired outcome as ko and seki), they simply say black/white to play (you are supposed to find the best outcome for yourself).

Most Tsumego puzzles are not intended to learn go, but to get better at it.

Thank you so much Vsotvep. Great answers to my questions. I was inspired to learn Go after watching AlphaGo movie…