Walking on old kifus in the secret garden

From far came sounds of cats and dogs, dancing and fighting with stones.

I wrote down three more tsumego.

It also works with rhythms

I’m not a scholar,
But I can search the archives
For ancient wisdom

Does ma’at mean rhythm in dutch?? That’s so cool! Yes and no! Ma’at can absolutely be called rhythm but the usage of the word is in reference to the Egyptian ma’at which was both the goddess of and incarnation of truth, balance, justice, harmony, etc

In terms of go, all of these things can be interpreted as great strength and ideal play.

The stones in the corner –
after they have been killed
he starts to worry . . .

From the essay Some Senryu about Go.

Here, or there, or where?
Reading clarifies the choice,
And instinct prevails.

The British Dans
inspired by BGJ #15

(I was unable to fit in Irving, Tilley and Fairbairn. These are all players who held a dan rank in the BGA in 1971, almost fifty years ago.)

white blossom petal
falling lands on the go board –
how can black reply? 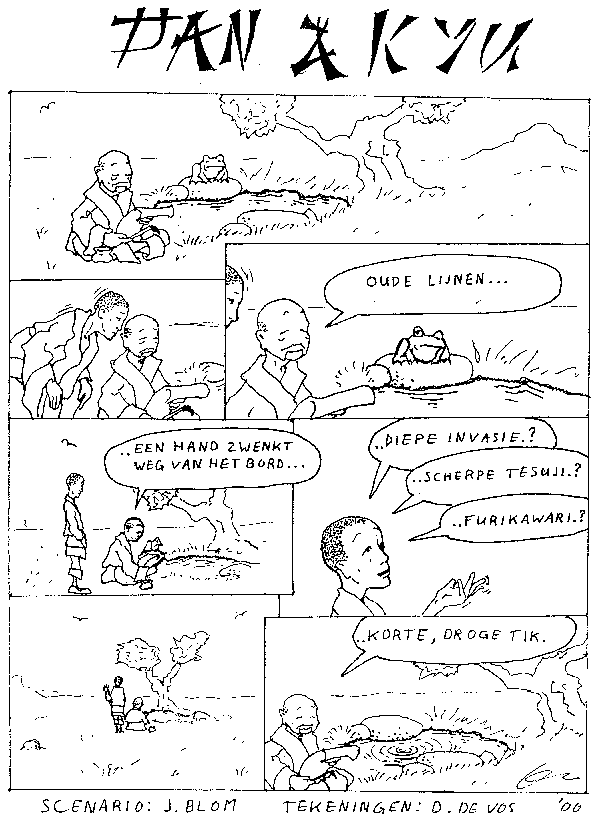 Translation (not in Haiku form):

Only Fairbairn would write a haiku with no romanisation. Up for a bit of Japanese practice, @S_Alexander ?

The back story is that Shiki was very ill - as was well known at the time as he was a long-time sufferer from the consumption that was soon to kill him. He would have been too weak to lift a bulky kaya board, and in fact goban here refers to a paper go board. This is hinted at in the apt choice of sueru as the verb (i.e… fixing it in place), but we know this anyway because Shiki’s notes tell us.

Until the 1950s go sets comprising a paper board and clay stones were common, being the equivalent of today’s plastic sets. Shiki describes how he got out a beginner’s book and started playing over the moves on this board only for the wind to blow in a draught and mess with the board. (…) We can infer from other writings by Shiki that the book in question was in fact a joseki book by his contemporary Honinbo Shuei.

Pioneering the laziest genre of poetry yet: the Sensei’s Library RandomPage haiku.

The lines are simply the first article titles that pop up and fit the metre.

Despite the coffee
Either muffins or dango
Make my sensei groan

Inspired by Excerpts from the AGA E-Journal - #10 by bugcat

Whenever I play go with Yokoyama-sensei in his home, Mrs. Yokoyama attends us with food and drink. She gives us each a cup of coffee during our first game, and endless cupfuls of green tea for the remainder of my visit. She usually plies us with small snacks – crackers, biscuits, hard candy – as well as traditional foods such as mochi (sticky rice cakes), anko-filled muffins (anko is a sweet bean paste), buntan and mikan (citrus fruits).

Sometimes I know the losing move when I make it, and sometimes Yokoyama-sensei feigns indigestion. I thought, at first, that his groans meant that I had gained an advantage or found a tesuji; I quickly discovered that they were the laments of a teacher with an inept pupil.

Inspired by Excerpts from the AGA E-Journal - #37 by bugcat

"The Chessboard Cherry Tree” tells the story of Oda Sayemon, a hotheaded feudal lord in old Japan who was noted for his bravery as a soldier, for his abominable play at go, and for his bad temper and violence when he lost.

"His most intimate friends among his retainers had tried hard to reform his manners after losing at go; but it was hopeless. All those who won from him he struck in the face with a heavy iron fan

Inspired by Excerpts from the AGA E-Journal - #23 by bugcat

Your next opponent may be three feet tall, bright yellow and named after a slimy invertebrate. David Doshay’s SlugGo program was one of two go-playing computer programs playing in the 2005 Cotsen Open … Named after the Banana Slug because it’s the mascot of the University of California at Santa Cruz, where Doshay is a Research Associate … SlugGo also earned its moniker “because it plays so slow"

Just ride Sensei’s Library’s RandomPage until you find a 5-, then 7-, then 5-syllable article title.

I think the thing that encourages one to float down the river through quite a lot of pages is that seven-page titles appear to be disproportionately rare. 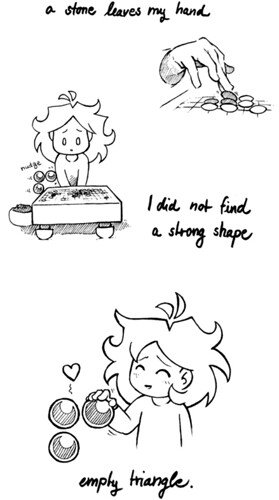 I’m in the mood for more RandomPage haiku.

They’ll be easier without demanding only one title on each line.

Dragons fights
Spectators talking on luck in go
Surprises gifted on the board.