Some stuff from Firefox dev tools

Using Firefox 51.0.1 and OSX 10.9.5. No problems apparent but found a couple things in Dev Tools to pass by you. I wanted to see if Firefox worked without problems for me. Figured than problems experienced accessing forum might relate to something passed from OGS to that site (like what is going to the other site could go to your site when opening an OGS page and cause the same kind of problem…this is how the clueless and naive mind works! :)). so looked in Tools to see what I might see. 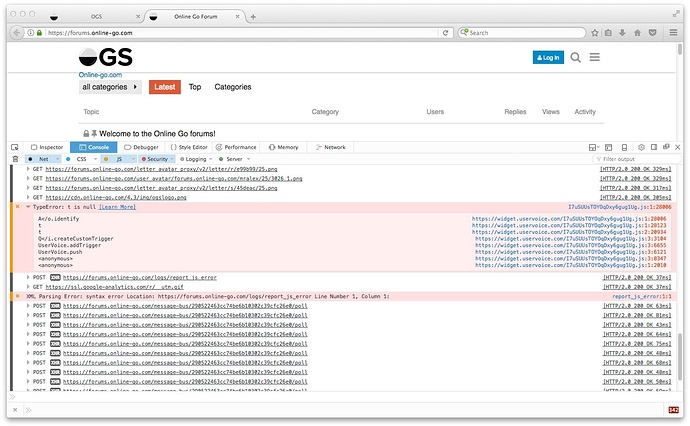 Look, please do not take this the wrong way, it is nice that you are trying to help, but I am not sure if this really is usefull.

I am quite sure our developers are quite capable of accessing developer tools on any browser they please (I am not so sure but kind of confident that some errors are also quite natural and to be expected). Maybe some dev will say otherwise and thank you, but until then I am just kind of worried if you are not wasting your time… I kinda have the feeling there are more urgent issues for them to work on right now other than some random errors that might or might not even be connected with the OGS code.

) maybe try contacting them directly via PM and ask if they need some focused testing. Just a thought, I might of course be wrong…

Well if you look at the other topic about blank screens you will notice that you requested exactly that sort thing. Also the case in topic I wrote about problem I had with Safari. Why didn’t you do it for yourselves then instead of asking for it?

If they want focussed testing i’s best they ask for it in very specific terms; some folks don’t need to waste time on more thankless tasks than they already own. There’s a workaround I’d like to ask Jerry Garcia about but he’s gone.

P.S. You got it right this time. I should give you the inane advice I once got as a kid: “Look it up in the dictionary”. There are some words where even one who learned to read using phonetics is a bit stuck. I did come to appreciate precise definitions, good spelling and the difference between etymology (natural language) and entomology (programming language).

the difference between etymology (natural language) and entomology (programming language).

LOL, nice … this had me scratching my head for a second until I realised you were probably referring to bugs