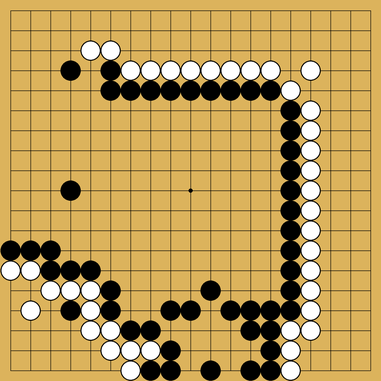 Again it is a private game , if you want a review make a plubic.

Invading the center after the walls are built is very hard for stronger players, but around your rank some errors are more likely to happen, so it could be worth a try.

A stone on 4-4 star point doesn’t grant a corner. If you want to keep the corner for yourself you have to put some more stones.
There are plenty of possibilities and you’ll learn them while you keep playing.
Your answer was good: trying to surround the corner works well with the facing wall, building a very large territory.

I strongly encourage you to play humans. Low level bots usually make crappy moves and don’t actually teach you about the game.

Wait I think I just had a WiFi problem so it said it was private so we won’t say the server is bad as I can see it now.

Walls are too slow for building territory.
Usually their goal is to fight: if your opponent moves too near you can push him against the wall and squeeze him.

But if opponent manages to live there, then you end up with a useless stick. Sometimes a dead stick.

If you want to build you need framework. Stones which are separate but work together.

Walls are too slow for building territory

That’s very important idea, but a bit hard to see. The thing is when you build a wall you already give points to your opponent to do this. Then the optimal way to use your wall is in most cases to use a weakness in your opponent stones to push them to the wall. In this process you will win a new wall even bigger, or kill something or enclose territories…
That’s a bit difficult to put in practice but there is no alternative, because go is all about optimal moves.