I will be organising an elimination rengo tournament following this formula:

When I read the title, I was expecting something else: a multi-round rengo tournament where the winning team of the previous round gets split into two opposing teams for the next round. Then the winner of the final round (1 vs. 1 game) wins the whole tournament.

Sign-ups here on this thread.

As long as I’m a player, I will be creating the games and posting the link in this thread. Since this is an elimination tournament, one of the non-eliminated players might have to pick up this responsibility at some point.

Register by posting on this thread or editing @jlt 's post below.

Maybe it’s easier to make a wiki? Then all players can register by adding their names to this list

Why not just make the game #1 invitation now?

Also, I’m very skeptical of strict rengo for more than ~4 per team. Has that ever worked? Maybe it could be casual until we get to 4 players, plus eliminate any individual who times out.

Either way I’m in

I like Feijoa’s idea of casual plus disqualification for timeout in earlier rounds.

Also, I’m very skeptical of strict rengo for more than ~4 per team. Has that ever worked? Maybe it could be casual until we get to 4 players, plus eliminate any individual who times out

Note that the choice of time-setting means time is somewhat shared between the team. You are guaranteed to have at least 24h to make your move, but whether you have only 24h, or up to 72h, depends on your teammates.

Finally, if a team times out, then the tournament will be over sooner, so the disappointment is short-lived.

Only 4 days left to register for the tournament!

Only 2 days left to register for the tournament!

Right now we have 11 players, which means:

I will join too!

Once all players have joined, I will assign the teams randomly using the following python script:

I wanted to send a notification to every player with my post, but you are eleven and discourse will only let me notify 10, so here is a ping to @_Koba

Yes you are on the list of players. So 2 players are still missing, and two players who didn’t register here have to be removed. 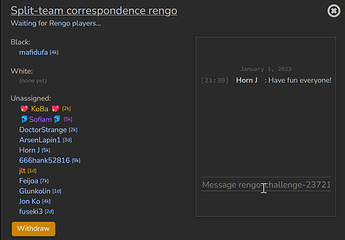 The first round has begun! 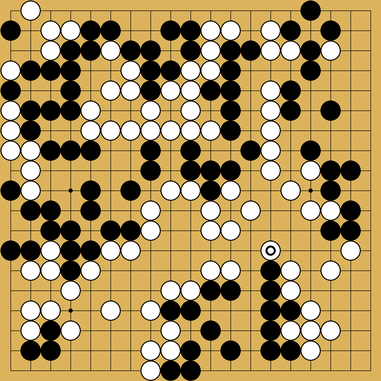 Bizarrely, I added the players to the teams in that order, and the order was respected for Black, but the players were somewhat reordered arbitrarily by OGS for White.

Any idea why the game is paused?

Strict mode rengo games gets paused if a player is in vacation mode, even if it’s not that player’s turn.