How viable would it be to have spontaneous sitewide tournaments?

What I mean would be, say on something like the ‘Play’ page or ‘Tournaments’ Page to have an opt int/join button where you can sign up to play a sitewide tournament (say the usual sitewide tournament rules) for blitz/live/correspondence or whichever you’re interested in.

Then if enough players join or are looking within say (5 minutes, maybe longer for correspondence) then it will start a spontaneous sitewide tournament. Otherwise it should probably just clear the queue of players interested (presumably if it doesn’t drum up a tournament, people will go on to do something else anyway).

((I know you could make your own tournament in a group, but I feel like the scope is a bit smaller))

I get the feeling that quite a lot of the scheduled sitewide tournaments are empty (bad timeslots/timezones for players?), some don’t meet the minimum number of players, or in some cases, you go through a whole tournament with just timeouts with no or one move played (Eg this blitz one, barring the last game the rest were timeouts)

Haze also mentioned something similar here in which all of their games had timeouts without playing Something about the Gold Trophies.

Presumably people that sign up do intend to play. It’s fair enough that sometimes you miss it or get pulled away and can’t play after signing up, but still it could be useful to be able to get another one going if there was enough interest, rather than waiting for another one in ~4hours.

There is an AST every hour. Not strange that some of them are annulled for a number of reasons. But there are always (every day!) some ASTs that are ‘normal’ (not annulled, or full of time outs, etc.)

5 minutes of registration time is 25 minutes less than in a AST (and ASTs sometimes are cancelled due to not enough participants).

AST’s have an enormous advantage over other tournaments: the cup icon in the top right of the OGS site. In my opinion an unfair advantage, but that is debatable.

The normal (not AST) tournaments are also often annulled due to not enough participants. PR of normal tournaments is often downright poor if not absent.
Closed groups with a handful of members who organise a tournament, that is not going to work, etc.

A tournament should be some kind of event with some kind of schedule, some rewards/prizes. The difference between a rated automatch and a spontaneous tournament is getting very slim

There is an AST every hour.

Oh as in Blitz 19x19, live 9x9, blitz 13x13, live 19x19. Like that cycle is spaced out over four hours so that’s one every hour? It’s still 4 hour gaps between 9x9 ones for instance though. But I suppose the timeout/cancelled comments are fair given this.

I’m not sure I see that as a big issue. Some people won’t use the automatch at all and just host a challenge, we don’t complain about that being a competitor or too close to the automatch?

There is issues for how players imagine what is a tournament. From that imagination they accept to play in a frame which is not exactly what they would like to be, they play on even with some more difference of rating as usual, they collect the trophies…
The more a tournament look like just one more opportunity to play some kind of automatch games, the less they will accept these changes.

I accept it would be silly to offer trophies if tournaments were on too regularly, but to be fair the trophies at the moment are a bit silly if you can win them by playing one game, or no moves as is, in the examples given above.

I think there also is possibly a difference between even the automatch vs AST settings. I think for blitz it’s 5 vs 2 minutes main time, followed by 5 10 seconds.

The site ladders are also even games for correspondence.

Yes sure the AST can be improved, there is even a open topic on it. Ladders? They provide a bit more as just games, there is some gratification in it, although same nothing is running perfectly.

the trophies at the moment are a bit silly if you can win them by playing one game, or no moves as is, in the examples given above

I am most proud of the first AST that I got first place in. I think it is my only one. Just because I played no games in it doesn’t mean I want no trophy. It shows me how I did and makes it easy for me to see it. Besides, if I could get a trophy by being the only one in a tournament, I should be able to get one if everyone else times out.

Can you get a trophy for being the only one in a tournament?

I guess I’m not so happy about mine is all, and getting two of them makes less sense

So, let get back to SAST’s (spontaneous AST’s).

@shinuito: you propose to open a pool, where players can register during a 5 minute time slot at any time of the day to play a tournament, provided there will enter enough players.

Questions:
a. when does a time slot start?
b. what sort of tournament (blitz, live, correspondence or something else)?
c. what type of tournament (single or double elimination, Swiss, round robin, (simultaneous) MacMahon)?
d. what board size (9x9, 13x13, 19x19)?

Concluding: a lot of questions to be answered and challenges to be solved.
Looks like finding your way out of a labyrinth. 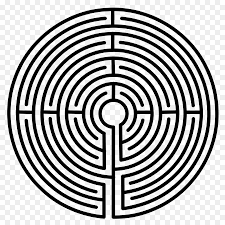 I don’t think the suggestion was all that complicated. I think most of the answers to your questions were in the original suggestion. 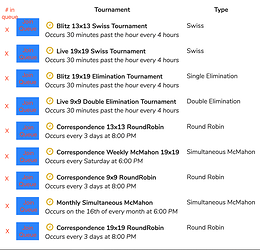 Just have the same format as the the AST, but allow a queue that’s regularly cleared for live and blitz (I said like 5 mins because there’s a high chance if you’re in a queue for much longer you’ll probably either join automatch instead or go do something else and forget you’re queuing up for a game)

You don’t need consensus, it doesn’t matter if you don’t get enough players - AST’s don’t start with enough players either, they just don’t go ahead.

Anything about board sizes I’m ignoring - see image.

Conclusion I don’t see any labyrinth

Apologies for the last post. I think it might off come off a bit rude, it does kind of read that way.

I appreciate the discussion though and the questions/challenges.

I know it’s not even an urgent or necessarily popular idea, I just thought I’d throw it out there and see if anybody would use or find such an option useful.

I tried to pitch this idea a while ago about being able to kick off sitewide tournaments once there was enough players interested, rather than waiting for the right hour of the day for a particular tournament you liked to begin.

That said, maybe a better proposal is just the Arena style tournaments they have at lichess.

Make a Blitz arena that runs at certain times of the day and it has a fixed duration (like an hour or 2 hours etc tbc). The way the Arena works (over at lichess faq here) is that it autopairs you with other players either of a similar rating or ranking (tournament standing) in the tournament

At the beginning of the tournament, players are paired based on their rating.
As soon as you finish a game, return to the tournament lobby: you will then be paired with a player close to your ranking. This ensures minimum wait time, however you may not face all other players in the tournament.
Play fast and return to the lobby to play more games and win more points.

You score points based on wins, and they have a streak system. (edit it to suit go)

So whats the point, why does it matter, why is it better than the ASTs or comparable to spontaneous ones?

Currently the elimination tournaments have slide pairing which can pair like 4kyus up with 18kyus, and maybe it’s fun if you like that, but it is just designed to keep the strongest from playing each other till the end, so it’s hard to have a chance of winning in some cases.

The swiss tournaments pair by strength, sure but I imagine a lot of people sign up for one game and then drop out, because who knows how many games you’re signing up for? When this happens there isn’t a chance for other players to fill in and take their place.

One could say just use automatch or custom to play games, but people do use the tournament system, so why not add to it a bit?

The drawback, of course, is that it only works well when there’s enough interest in it. For example, the player base isn’t quite big enough at lishogi, so those arena can just stall with not enough players signed up, or not enough unpaused.