Stalemate, what happens next?

I’m in a game at the moment and we seem to be stuck in a stalemate.
If you want to have a look, the game is on my profile page, it’s the game against quigibokev.

We are in triple ko, but the game doesn’t seem to detect it, so it goes on indefinitely.

Is there any way to draw the game? Or as a feature request, can super-ko be detected automatically (no board position can repeat twice in the same game)?

EDIT: Here is the link to the game

This is the game in question 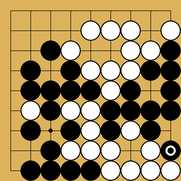 Maybe there should be an option for offering a no-result in the sidebar for situations like these.

[spoiler]This is triple ko only if both players are unwilling to back down from it. One of the players can still win this game by ignoring the triple ko[/spoiler]

A moderator can end the game in a draw in the case of a triple ko. Though, there should probably be an option for a draw if both players agree.

In case this happens in a tournament game and a draw is not an option(for pairings etc.) there should be imminent rematch. Might be bit problematic for correspondence tournaments where the games are super long anyway.

Japanese rules states that the game should be a “no result” (not the same thing a a tie) in the case of a cycle that neither player is willing to back down from.

Yep, we do have proper support for this but I’m a dork and forgot to wire up the button that voids the game. (It’s not an automatic thing, players have the option of breaking the repetition under japanese rules, or the player whose turn it is when a repetition happens has the option of voiding the game.) I’ll get it fixed up

I see the game has been ruled a tie by moderator decision, but it does not show up as a draw in either players’ game history.

There is a discussion in the spectator chat about whether this game is actually a triple ko. A [2d] player has commented that this is not, since black can ignore the cycle to finish the game elsewhere and that white should be judged to be dead according to the Japanese rules, while black’s group would be alive by double ko,

I find this situation a bit confusing. This might not the typical triple ko pattern where each player must continue the cycle to avoid losing it. Black could let the game end with his group protected by double ko, but it seems that white’s group is also protected by the same double ko. Neither player could kill the other with any continuation of play, so should they be alive in seki? Or would this called eternal life? Or is this a special case specified by Japanese rules that kills white but lets black live?

Could someone help further explain?

It’s a solid triple ko. If black tried to play elsewhere white will take the ko…

EDIT: oh hmm it seems black can play elsewhere easily. Once the board has been finished there is no way to eat white stones though. I still think it’s a triple ko.

EDIT 2: I found this nice site with examples. http://homepages.cwi.nl/~aeb/go/rules/triple_ko.html there is one with the same situation

I’ve added further comments to the game to explain why white is dead, and black is not.

I can’t find an identical situation on the page Pempu linked. Which diagram did you have in mind?

Ah, I see. Both are close, but not identical.

In the first, there is a similar double ko between the groups, but the outside ko threatens to make a real eye for white. If black plays tenuki there after white takes at T11, white will play T10 and it will turn into double ko seki.

In the second, there is also a similar double ko between the groups, but there are two outside kos. The statement on the page that “White can play elsewhere and allow Black to fill the ko at L19 or P15. Afterwards it is a triple ko, and a cycle is forced.” is wrong. Both outside kos are needed.

Hmm. You are right. They are not the same.
It’s very weird. I intuitively thought it would be triple ko. I can’t find any examples on the internet though

I think we just learned something here

Very cool. And kudos to OGS for intervening with a decision.

That would not happen elsewhere.

@herminator, thanks for the clarifying and pointing out the special rule that comes into play in making the life/death determinations. It seems that a lot of us (myself included) were not previously aware of this particular rule.

The Japanese rules are complicated, but luckily most players will probably never need this rule in their life

Just a quick note: Under other rules, such as Chinese or AGA, if you play this situation out without such a “no ko recapture” rule, but with superko (i.e. long cycles are forbidden), the white group would also die. White simply has no way to resolve the ko, so black can play tenuki as a ko-threat at almost any time.

That made my head hurt.