Why are the star points on a Go board? Are they there to be aesthetically pleasing, or is there a more historical/meaningful reason?

I believe they’re there for navigation. Just helping you stay oriented to your global position on such a large board…

I will leave the historical origin to someone more knowledgeable and simply address the more obvious use. The star points provide outstanding orientation in the immense field of a 19x19 board. The important 4-4 corner points are marked as well as the mid-point of each side (a good place for an extension or a move to split the side) and the center point. This makes it much easier to comprehend the board better. Of course, they are also used for placement of the handicap stones, typically in a prescribed order…

From historical perspective, the short answer is we are not sure.

The earliest definitely physical evidence for boards with marking on star points we have right now is from a 6th century tomb. 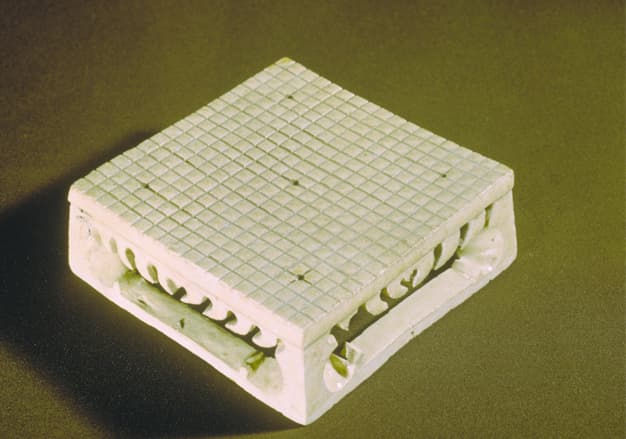 This is not the earliest board unearthed, some earlier ones either not in the grid sized we are familiar with and have markings, or smaller boards, or even number of lines, which cannot be sure to be Go boards.

Some of the earliest unearthed “grid patterns” actually have markings, but they are incomplete and broken, which ironically was suggested to be a Go board because of the X marks “the star point” argument. This is a big speculation, not even sure if it is a Go board or not, or just a pattern happen to have a marking for other reasons (or for other games). 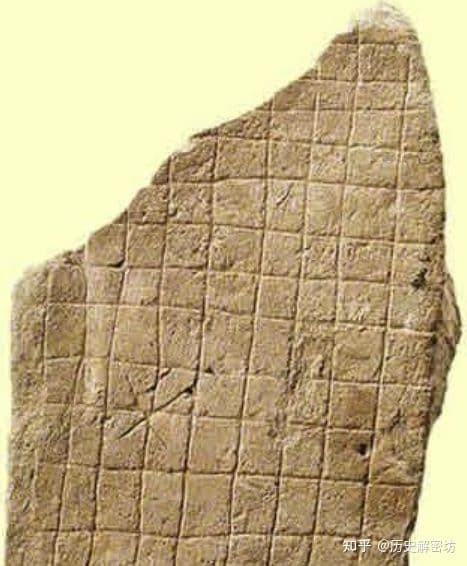 Texts from the era (from Han dynasty to Tang dynasty), indicate players already use the terms as corners and sides and all the associated concepts pretty much the same as today, like - “先據四道兮，保角依旁” - first take the four(th) roads, to keep the corner and lean on the sides (one likely translation might be regarding the 4th lines as we used today). And they described pretty vividly about the board - “取坤象於四方，位將軍乎五嶽，然後畫路表界，立質朱文，曲直有正，方而不圓，算塗授卒，三百為群” - Like the qun sign (an I-Ching symbol) to symbolize the earth and four directions, mark/place generals that represent the 5 mountains (in Chinese myth, 5 mountains on the east, west, south, north and center support the sky from collapsing). Draw roads/lines to represent their boarders, and use red ink to draw (odd spacing? this is very hard to translate) grid, (that is) strait in horizontal and vertical, like squares instead of circles (this is a very interesting description, since there are games not using grids as their boards), calculate all the soldiers (you need) and give to the players, in the number roughly 300 in total.

And since we know the earliest records we had for ancient games, almost all have fixed placement stones, it might be the earlier precursor games were build around these fixed placements to begin with, and the number of lines between them are flexible instead of the grid pattern came first (and the markings added on top). This might explain why there were inconsistency in the number of lines in early boards we unearthed, some not even have the same number of virtual and horizontal lines. They might not even start as games on grid boards at all, or even about encirclement/surrounding area.

I’d consider Cho Chikun an authoritative source. This is from Go: A Complete Introduction to the Game:

Go is usually played on a 19x19 grid called a board. Dia. 1 shows the empty board. Notice the nine marked points. These points are usually referred to as the star-points. They serve as points of reference, as well as markers on which stones are placed in handicap games.

The oldest go boards in Japan are preserved as national treasures in the Shoso-in Museum in Nara. They belonged to the Emperor Shomu (ruled 724-748), and their playing surfaces are essentially the same as those in use today, except that one has seventeen star points instead of the nine found on modem go boards.

The oldest go boards in Japan are preserved as national treasures in the Shoso-in Museum in Nara. They belonged to the Emperor Shomu (ruled 724-748), and their playing surfaces are essentially the same as those in use today, except that one has seventeen star points instead of the nine found on modem go boards.

He was talking about this 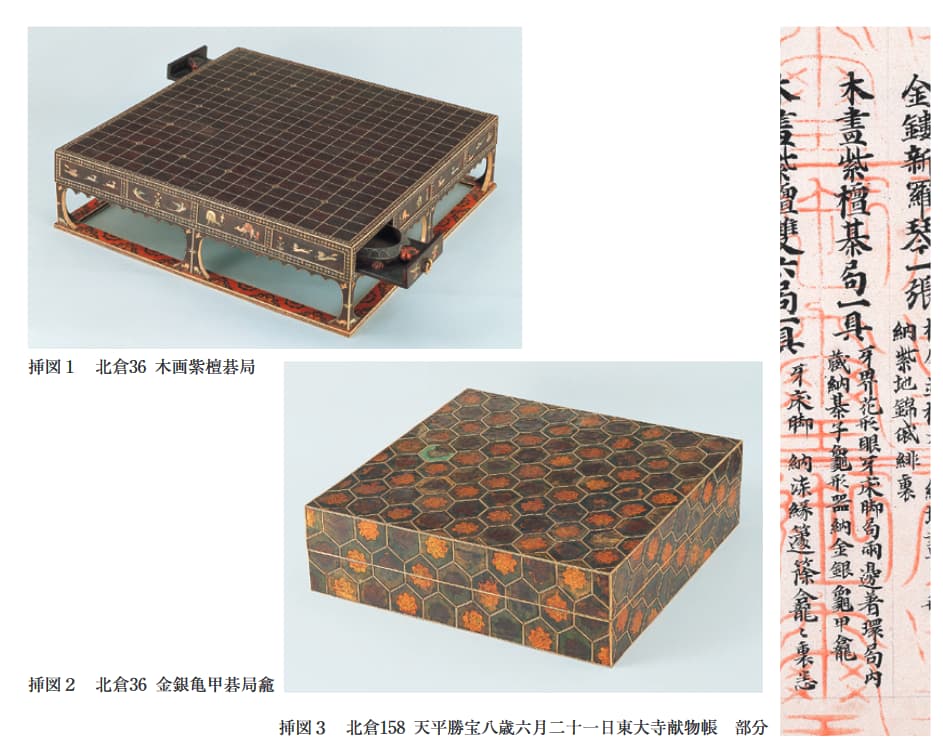 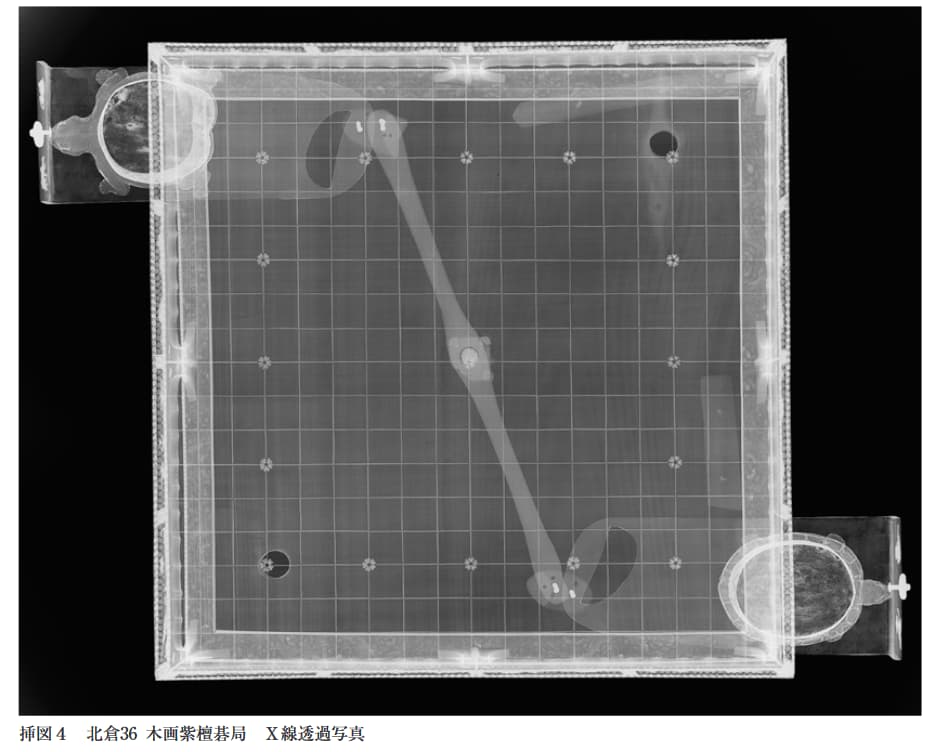 The date of this object - “木画紫檀碁局と金銀亀甲碁局龕”, logged into the warehouse is at June 21, 756 AD (天平勝宝八歳六月二十一日), and believe to be brought back some decades earlier from the mainland, possibility from modern-day Korea, since it resembles the artifacts of that area then. With another clue where its 17 marked points are exactly where the Korean variant - Sunjang Baduk placed their fixed stones. 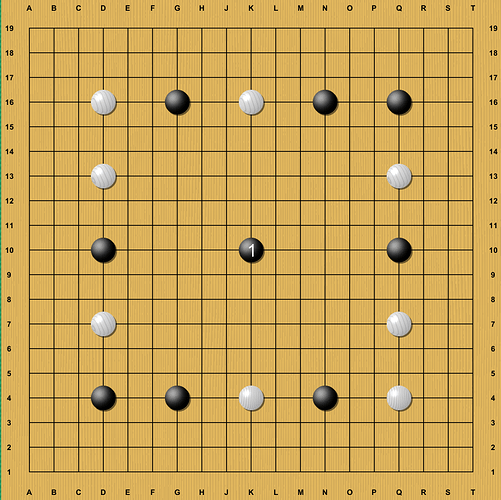 It is still about 2 centuries later than the 6th century ivory board unearthed which only marked 5 points, that matched the historical text of representing 5 mountains. There are definitely many variants existed at the time, probably many more than we know. And older ones all seem to have fixed placement stones in the past. And still no clear answer as to why they existed in the first place. The research of the precursor games is still highly debated and required more works (we are not even sure till the 11th century was there a rule for black to play first or white to play first, or even where the handicap stones were arranged). The argument for these star points as handicap placements doesn’t match traditionally where the handicaps go beyond 9 are placed (to 11 or 13 or 17, etc.)

Another interesting thing though is that this board is almost a perfect square size (49 cm x 48.8cm, closer to modern Chinese board size, and the grid is slightly larger where the edges are narrower), instead of the modern shorter length than width size. The earliest record of the non-square board dated back to late 12th century - “玄尊著『囲碁式』正治元(1199)”, but what exactly happened causing the introduction of the new measurement (smaller and non-square boards) is still somewhat unknown.

is from a 6th century tomb.

But you can’t play on borders on this board!

Maybe they played inside squares?

Maybe they played inside squares?

Don’t even think about it @yebellz

It’s not an actual functional board due to its size (10cm squared), but sort of a “decorative/ceremonial” item. And it is not the only one.

This is another one unearthed, made of glazed ceramic (11cm squared) from Tang dynasty (7th to 9th century), also a decorative item but less sophisticated. 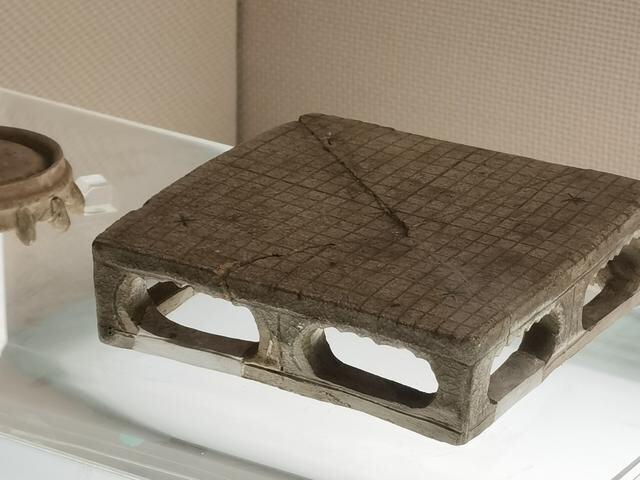 This one also made of glazed ceramic (13cm squared) from Sui dynasty (late 6th to early 7th century), but it doesn’t have star points marked 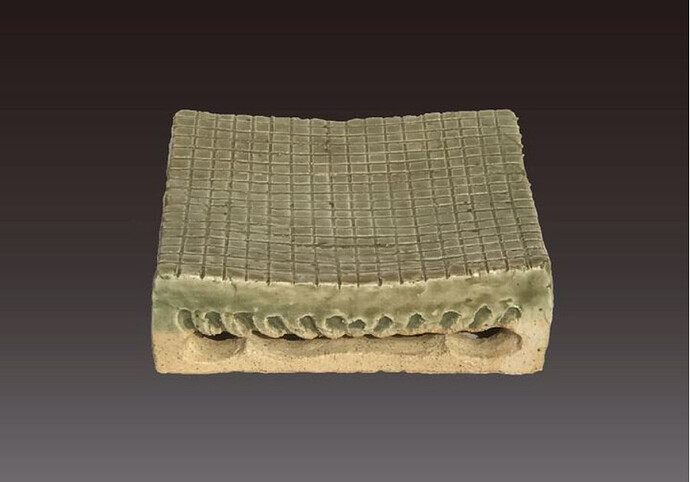 This is also from Tang dynasty era, but unearthed in Central Asia (at the time part of the Tang Empire influence area), at 18cm squared size made of wood, and it doesn’t have star points marked. It was highly unlikely a functional board, unless we unearthed 1cm sized Go stones later. 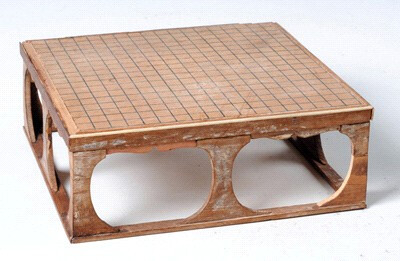 Most items unearthed from tombs are artifacts specifically made for the dead, and usually not practical items. One of the oldest-known full-size boards unearthed is from late Han dynasty (2nd century AD), at size 69cm squared made of stone. 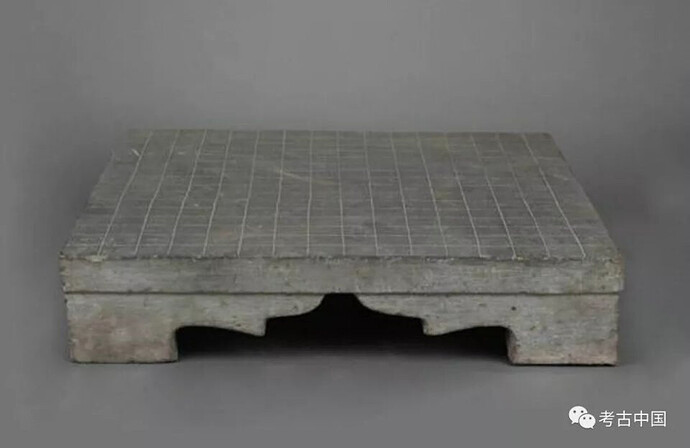 圖片960×624 45.9 KB
It is a 17x17 board (with lines up to the edge), and is still considered to be a tomb artifact than a practical one. And it doesn’t have star points marked (this is why I said in the previous post, we are really not sure when or why they were marked in some but not all)

However, as mentioned above, the fragmented clay grid pattern piece is unearthed from a foundation of a doorway (from early Han dynasty, maybe in the 1st century BC), and is suspected to be part of a Go board (based on the X mark at 4-4 point, but the lines are very irregular). If it was part of a Go board, it was probably a functional one considered its size (28.5cm x 18cm, for 2.3cm x 2cm grids about the same with modern boards), and it has edges. 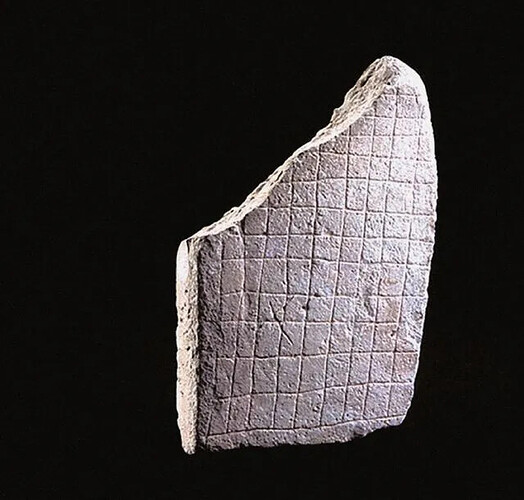 It’s definitely possible that there were different rules and variants that don’t have fixed stones or marked star points (or loss some features as they spread, even evolved beyond what we would recognize as Go games), the travel and spread is slow and not easy in ancient time. Go is not just one game, but a family of highly varied games in the past.

And to make things even more complicated, the same batch of Go boards from the Japan Nara period came in three, these are the other two 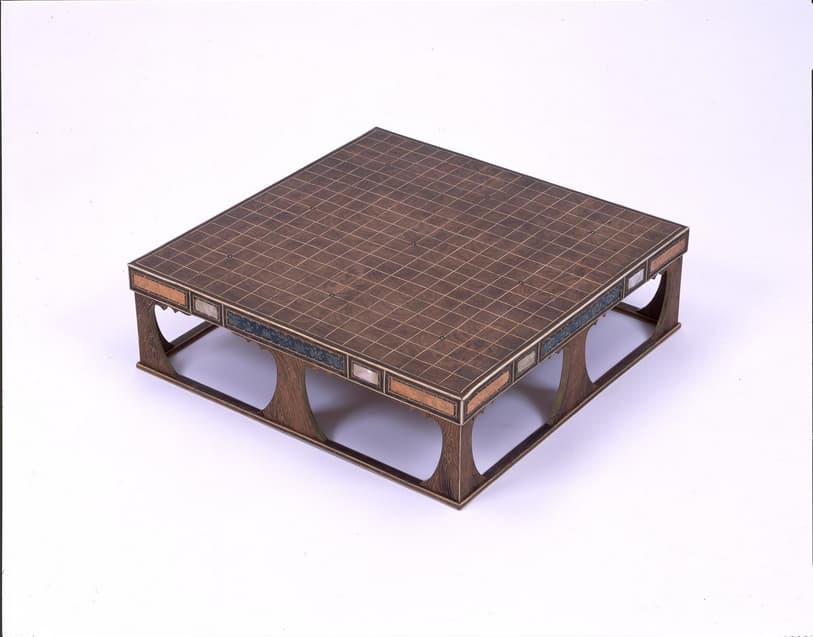 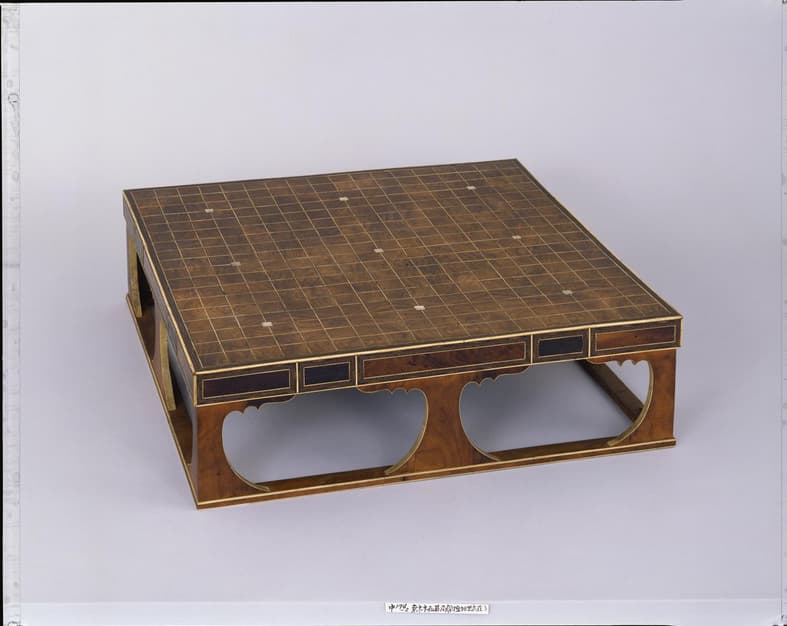 Thanks a lot. All of these boards are fascinating. 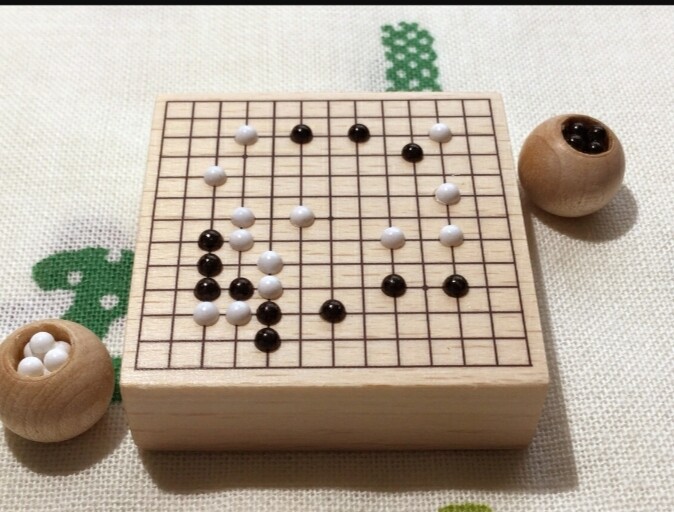 I would just like to thank Claire Yang and everyone else who posted some very intriguing stuff, I learned so much!
Thank you.