Hey all, was just playing a game where I left a corner unresolved for quite a while. I’m pretty sure the corner was strictly decided by who played there first.

We left it alone for like… 150 moves. Mostly I’m looking for an idea of if black takes the first move there, can black definitively kill, or is it ko or even just alive if played optimally by White? It feels pretty dead, although some of my variations ended up in ko, but I figure that was due to my own misplaying of Black, just since I did it very quickly.

I made a review. Here’s the link: 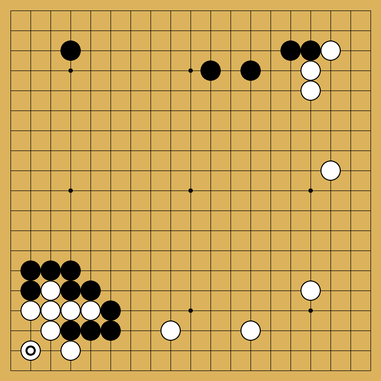 I think that if black plays first, white’s group dies, and if white plays first, the group lives. That being said, my rank is only a little higher than yours (I’m 8k), and I’m not sure the review is entirely accurate.

That seems accurate, and a much cleaner progression than what I was worrying about. I did know that White lived with first play there (hence why I eventually made it worth my time to get back there in the game), but yeah, that cutting point just leaves too much. Thanks

I did not want to open a new topic, since my question seems to fit this category. I’ve recently finished a game, and I’m unclear about why the upper left corner territory belongs to white in the end scoring, instead of black, who has the territory surrounded within white’s wall. OK, black does not have 2 distinct eyes inside, but the same can be said about the lower right corner, with the exception that the latter is larger by far. Not that the upper left would’ve made the difference of the outcome, but I really want to be clear on this. I’d be grateful for any insight! 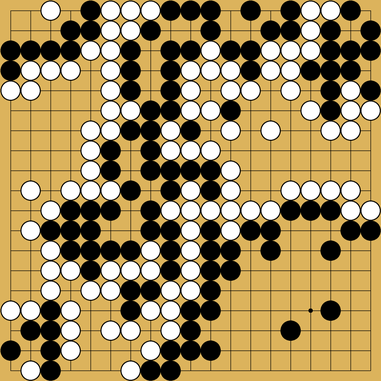 You can find the answer here: https://senseis.xmp.net/?WalkieTalkieSeven

Not that I fully understand it …

@Gwahyyr, the shape in the top-left of your game is known as the walkie talkie seven. This sensei’s library article has a lot more analysis
https://senseis.xmp.net/?WalkieTalkieSeven

@Spiffers I added another fun variation on @GOkyle’s review, which kills with a nice tesuji sequence. I’d agree with “whoever plays next, wins” as a general assessment.

OK, black does not have 2 distinct eyes inside, but the same can be said about the lower right corner, with the exception that the latter is larger by far.

To explicitly address this part of your question, the lower right corner has no weaknesses in the wall that can be successfully attacked, and the space is too small for white to form a living group against sound defense. Ironically, the fact that the space is much larger than in the upper left makes it impossible for white to force a seki or a ko.

Excellent, thank you for your insights. I was not familiar with the walkie-talkie seven at all.