Good day,
I was looking at a 9x9 game review here.
On move 5 we have this position and here is the comment:
“Attaching here was a good choice. It’s sente. It also prevents white from invading 3-3.” 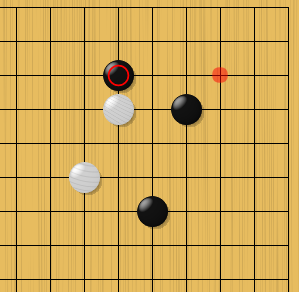 Though I can’t seem to find a line where black can successfully kill the white invasion.
Any help will be much appreciated.

Well, there are many variations to go through and I am probably not qualified to go trough them, but I would kind of agree that white can still live in the corner, or at least get a ko for sure. However it is now very impractical in this situation, because it will be gote and will hurt the remaining white stones badly. Maybe you could share a variation of what you have in mind for white and we could go from there

Learning about when the corner is safe Teaching

My 2 cents: “It prevents white from invading 3-3” is not the same as “black can successfully kill the white invasion”. Moves up to 9 are forced, and white wouldn’t consider an invasion until move 10.

If white plays 10 at G7, I believe black’s reply at G6 leads to a ko. The link posted by @GreenAsJade should help you go through the variations.

Ok, make more sense. Even if white can live it just helps strengthen black.
Thanks for the help!

“Prevents” may have been too strong a word. Rewriting it, I’d say the attachment “discourages” a 3-3 invasion. My rationale is pretty much what @Adam3141 said—White may live, but the cost of invading is likely to exceed the benefit, as Black will naturally add moves to the outside, and that jeopardizes the outer stones.

The variations would also be pretty complicated, as you’ll see from variations I added to the review just now.

After this normal play white need stone at both 1-2 points to make life. Because white does not get two moves in one turn this is miai letting black get the kill. I have tried other variations which are not normal. But white dies each time. With out the stone marked in your diagram white seems to have more success living.

The key here seems to be the black stone allows the push at #4 and the hane at #8 while preventing a white cut.

@jmrott001 see the following link for the standard variations:
https://senseis.xmp.net/?4463Enclosure33Invasion

White gets at least a ko. In this game, white is strong outside, so she might actually be able to live unconditionally (see Standard joseki 3 in the above link).

On sidenote: I recently learnt the hard way that you can actually kill san san invasion locally after first extension. But you better be confident in your strength all around before trying…

Is there a “key place” where you need a stone?

How, generally, would it go such that the spit single black stone isn’t a deadly liability?

I think generally it is advised not to attempt this unless you have a giant F-OFF wall rather close to this position and fully enclosed with no/few weaknesses in the wall itself. The generaly premise is that you can play on top of white’s stones and underneath them because those two stones never need to connect to each other as they can both connect to the wall. Meaning white has nowhere left to make eyes. But you need to be rather strong locally to pull this off.