Stream announcements should have a rank that can be filtered on

With the new announcements system it’s nice that I can block all announcements from certain streams I’m not interested in, but there keep being new streamers added I’m not interested in either, but I get spammed with them until I mute them as well. I could turn of all announcements, but there are some I do like such as the EGF pro ones, or Michael Redmond. They have something in common, they are stronger than me. I imagine that’s a fairly common criteria for what people like to watch, though it is possible to watch ones weaker for entertainment rather than education.

So a handy little feature would be

While I understand your intentions, I don’t think I like what the idea you propose and I don’t see an easy way to make it work.
Tournament organizers often put up announcements of streamed/commented games. How do you assess the level, by asking them? How do you know when to ask?
If we assume that those who stream are also those who play, often the rank on OGS does not match the actual rank. Some streamers play at a level lower than their potential (ex. sandbagger series), for example. Manually setting the rank could be punishing for growing players instead.

I have never blocked any announcer, is it really that annoying to do so?

I think the announcement system is pretty annoying. And it seems fairly normal to want know the rank of the reviewer/streamer making the announcement. And since these things are set up manually we could find out as part of that process.

Maybe we could at least make a distinction between professional and others?

If there are really so few that you find interesting, I think it would be easier for you to block all announcements on OGS and get notifications from the source, since you are probably following them in their accounts anyway.

Tournament organizers often put up announcements of streamed/commented games. How do you assess the level, by asking them? How do you know when to ask?

The announcement preferences page makes a distinction between events and streamers: my suggestion was only for streamers, as it’s clearer that’s a single entity with a rank. (You could extend it to tournament broadcasts, but that’s more work to input the ever-changing rank of the games being broadcast on the same account).

since you are probably following them in their accounts anyway.

I’m not, maybe I should.

But also if I block all I wouldn’t see some new strong streamer, which I’d like to. Perhaps you just say that muting all the weak streamers I’m not interested in is the cost of that. It’s not a huge deal, just a little suggestion for a long way down the priority list.

If we assume that those who stream are also those who play, often the rank on OGS does not match the actual rank. Some streamers play at a level lower than their potential (ex. sandbagger series)

I don’t think this is allowed on OGS. It was given as the main reason why Batts doesn’t have banner priveleges (that he wanted to play ranked games at low ranks for teaching content). Those streamer sandbagger games generally take place in other servers like Fox.

I find it strange, not getting banners for the biggest streamer playing simultaneous teaching games on OGS while we get banners for obscure people playing competetive kyu games on fox.

That said, it is nice for streamers getting started and it is probably encouraging towards strong but shy players who consider streaming too, seeing so many go streams being advertised.

Event/stream distincion seems good enough until a time when we have lots of strong streamers and kyus are overwriting them in the announcements.

(that he wanted to play ranked games at low ranks for teaching content).

Ranked being the key word there.

I get that and I mostly agree that he shouldn’t be allowed to play ranked sandbagging games on OGS. My point was, that the concept of “sandbagger series” is already not allowed without the banners coming into the picture. “Streamers do sandbagger series and their rank on OGS don’t match their strength so we can’t display their rank” should be an impertinent argument because if there is a streamer doing a sandbagger series on OGS, they are crossing a line (speaking from Batts precedence).

I don’t even see the sandbagger issue as a problem for my proposed feature: if Batts was making announcements here (I didn’t know he wasn’t allowed, though had noticed their absence) he would presumably only have announcements rights on his main Batts or dwyrin or whatever OGS account ranked at something dan, and not on whatever random-named kyu sandbagger account he is using this week (which might not even be on OGS).

And if BadukDoctor is playing as a 3d on Tygem, the streamer announcement for him would be at 7d or 9d or whatever. Exactly what isn’t so important (OGS, Korean, EGF, AGA rank etc), it’s just being able to do some rough filtering.

This could be encouraged when giving banner priveleges: Advise the streamers to add their rank to their announcements so they can meet their target audience more easily. I’m sure some of them would agree and do it, which would be better than nothing.

(I didn’t know he wasn’t allowed, though had noticed their absence)

I also didn’t know he wasn’t allowed (announcements that is), I’m not sure if it’s catalogued somewhere, but maybe another mod will know if it’s the case.

I can’t object to the “not being allowed to play ranked games” though while trying to play at various levels.

That said, supposing they wanted to play unranked games on OGS in particular, it’s probably counter productive to announce the stream on OGS.

I vaguely remember seeing in previous videos it mentioned that once players realise they’re playing dwyrin on one of the alt accounts they could end up playing differently than usual. At least the idea was that if he was recording a basics video, then he might try to avoid killing a group, but if his opponents know he won’t kill a group they won’t try to save it etc.

Re the rank filtering, for announcements I can imagine that something like Lichess streamers • lichess.org might help in all cases for people to find what they’re looking for rather than relying on banners and adding many more filters onto the banner system.

Wasn’t the original banner criteria that one had to be playing or teaching on OGS?

sometimes you turn off the announcements but when you refresh the page you will see them again. I’m assuming there might be a problem with that. my suggestion is to have a list system where we can see the broadcast announcements with the time of the announcement and a new tab should be designed for this. so that the home page is not occupied. I find it very helpful to support new live broadcasters. I think that it is necessary to be more polite, especially in an open platform such as a forum, about the perspective that has just started live broadcasting, which has a low level.

Yeah, i think it might be good idea if streamers would indicate their rank somehow. Maybe i’ll add that to proposed rules for streamers (we still dont actually have any proper/official guidelines for people who make up banners >____>) I am too pretty much only interested watching streams from stronger players, so i’m in the same boat than uberdude with this one.

Even better idea might be having some better way to show banners, iirc the current bannering system was meant for “server update in progress” type of messages before twitch became a thing, but now its mainly used for advertising streams.

Oh also, as you hopefully know, those banners are put up by the streamers themself, not by anoek or the moderators. I dont know why dwyrin doesnt use ogs to advertise his streams, tbf we’ve basically given the bannering rights for all streamers who have asked for those, so far i havent turned down anyone who has contacted me and asked for it ://

Exception are the egf pro league banners and such, pros are bit lazy so i’ve been making those banners quite often (i was busy last weekend so apparently no-one bannered those…)
I wonder if i should start categorising those twitch commentaries under ‘event’ instead ‘stream’ - that way people who are annoyed with the constant banners could block all ‘stream’ banners but could still see egf streams? i guess organised professional league could count as ‘event’ instead just ‘stream’?

my suggestion is to have a list system where we can see the broadcast announcements with the time of the announcement and a new tab should be designed for this. 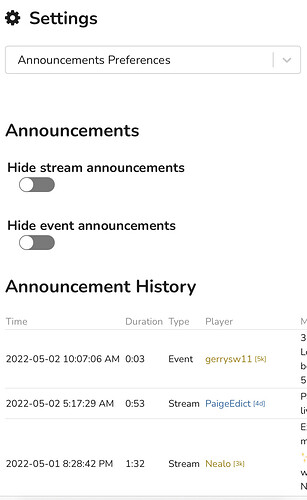 Looks nice. Well, would it be more useful if we could reach this page with one click, that is, in an easily visible place?

I think that’s the first time I’ve visited that page list in months.

Sure it could replace maybe the leaderboards link, but I’m not sure it really needs to be that accessible over anything else, games/play/profile/puzzles/home etc.

I probably don’t need to visit it becuase I read the announcements as they pop up and/or dismiss them. Or if I’ve missed an announcement, the streams I missed I probably won’t go back to find them in the history anyway.