There are several essential life and death patterns that quite commonly occur in games, however can be quite tricky to master. I think knowledge and familiarity with many of them are vital (necessary but not sufficient) for becoming stronger (reaching shodan and beyond).

If you’ve never heard of patterns like L groups, L+1, L+2, J groups, J+1, tripod, notcher, long L, door group, hovercraft, carpenter’s square, etc, and you are a DDK working toward SDK, or even an SDK working toward dan, then I think the below linked resources are valuable.

You could also figure out a lot of these patterns on your own by solving enough tsumego, but I think at least for some, systematic study could be beneficial. There are definitely many other great resources, but here are a few that I know about and found to be helpful.

Sensei’s Library has a great catalog of common life and death shapes:

In particular, see the “Corner Shapes” and “Side Shapes” sections.

James Davies wrote a nice book called simply “Life and Death”. Each chapter focuses on a pattern or concept, spends a couple of pages discussing it, and then provides about six problems to further explain and explore variations.

Here is a list with Sensei’s Library links for the corner shapes covered in this video:

4. Participate in the study group formed in this thread

How about every now and then we post in this thread one of the common patterns, linking the Sensei’s library page and some problems to consider, and then we (for anyone that’s interested in participating) read the materials and work through understanding the pattern and problems together?

I’ll start this with my next post in this thread (either later today or tomorrow, to give me some time to gather materials), with the first topic being the “L group”.

26 Likes
Articles from Sensei's Library
:skull: Sekify that group!
Bugcat's thread guide
Good list of source material?
How not to get bored during a lockdown
OGS Community Go resources
lucasfelix April 17, 2019, 2:43am #2

P.S.: Take a look at Jasiek’s First Life and Death.

Alright, let’s kick off this study group by looking at the L-group, which I think is a good place to start, since this pattern is very fundamental to understanding and evaluating other patterns. 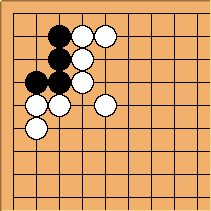 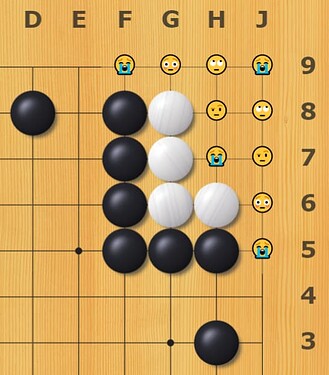 this pattern is very fundamental

So when it comes up in games I am working it out fresh each time, though I’m confident I usually get it right.

Is it called the ‘L-group’ because of how it looks in this configuration?

Yes, I believe it’s called the L group because it looks like an L in that orientation.

The basic thing to remember is that black is dead even if it is his turn to play. You don’t have to memorize every response to black’s futile attempts to live, but just practice related problems enough that you can read it out during a game.

It is fundamental since some related groups can be reduced into an L group in order to kill. As the defender, you need to avoid being reduced to this dead shape.

Week 2: Rectangular Six in the Corner

I originally considered looking at one of the shapes related to the L-group for this week. The shapes listed under that link are slightly more complex descendants of the L-group, since analyzing them often makes use of what we’ve learned about the L-group (i.e., that it is dead).

However, before we move onto to those, I thought it might be worthwhile to look at another related shape (although it is more like a sibling to the L-group), the “Rectangular Six in the Corner”: 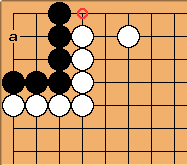 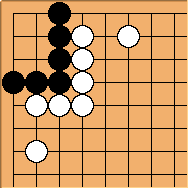 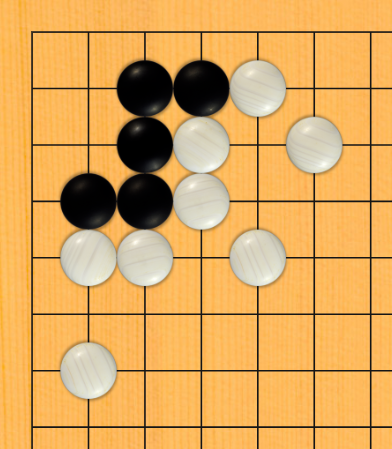 The L+1 group is a direct extension of the L group. There is an extra stone, giving the group a “leg” to stand on. The leg could be on either side, so there are two varieties. The above pictures and focus for this week is just one of the those varieties, which I am calling “wider”, since it makes the L group larger along the shorter dimension. 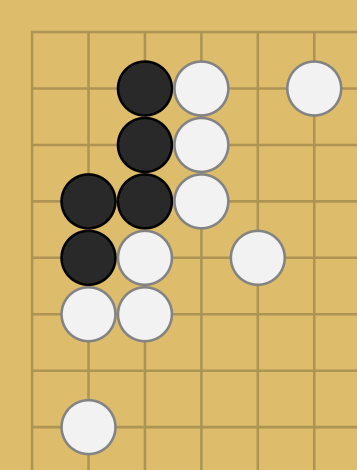 Sorry, it’s been a bit longer than a week since the last post. 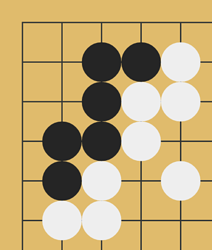 Hanes might threaten to reduce this shape to a dead shape, but each can be correctly answered with inside play in order to secure two eyes (marked with circles). 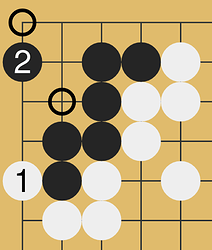 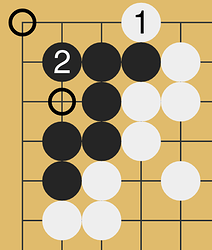 This shape wraps up a main theme seen from the L group, through the L+1 groups, and onto the L+2 group:

Of course, there are a lot of complications along the way, with variations to each of these shapes.

Shape 6: Bent Four in the Corner

Here is the reference shape for “bent four in the corner”. 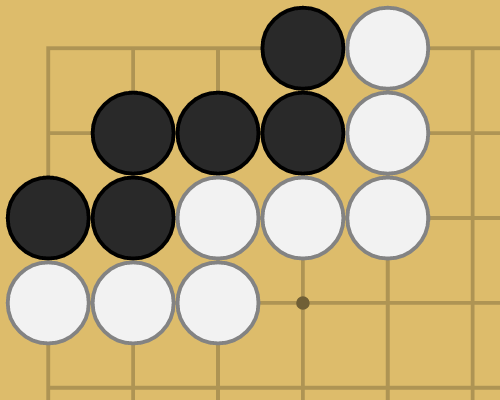 The reference shape is unsettled

Of course, black can make life: 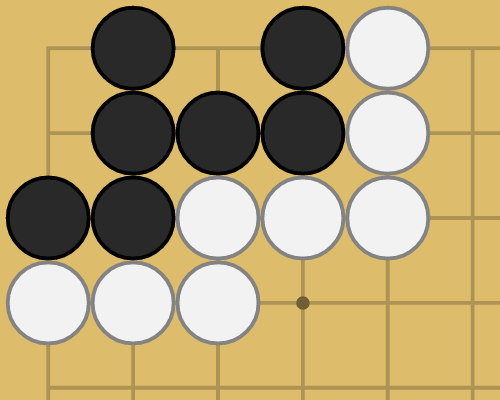 However, white can start a ko fight: 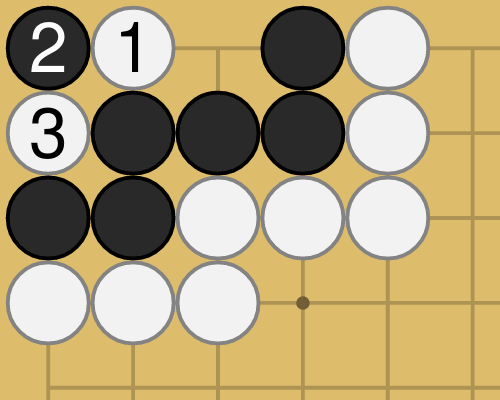 If white wins the ko fight, black can be captured: 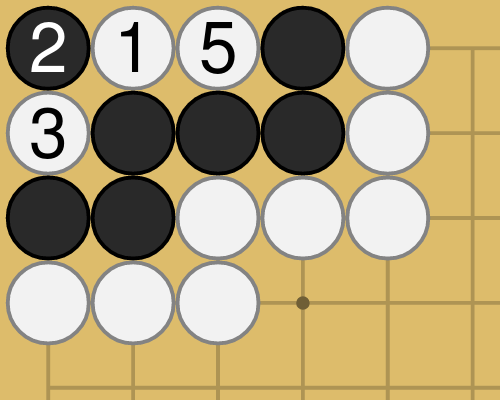 However, white might not want to start the ko fight if the ko situation in unfavorable.

If black has one external liberty, white must end the ko fight differently: 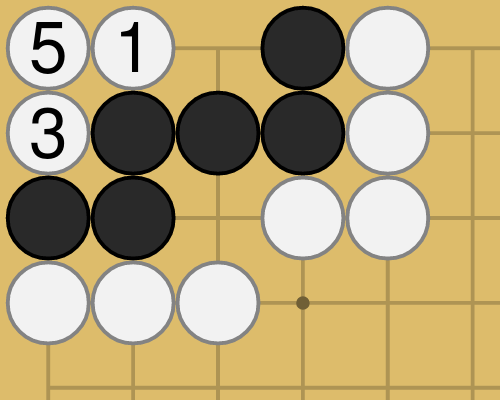 Although black is dead, black may later capture the three white stones (forcing white to play again at 5) as a ko threat should another ko fight arise elsewhere.

If black has two external liberties, then black does not need to fight a ko to live: 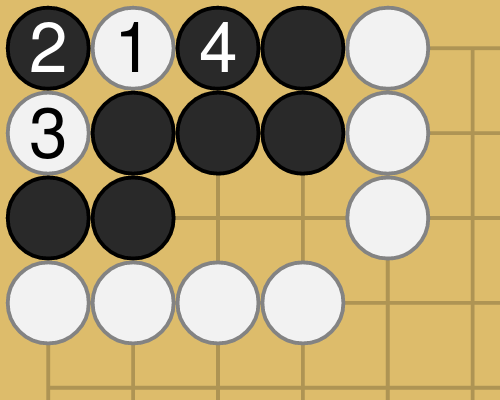 So, there is no urgency for black to play an additional stone inside until white has reduced external liberties to one.

The basic bent four in the corner shape is unsettled and hence may live or die depending on whether if black plays again to make life or if white can win the ko fight. This pattern also arises as a product of other positions that can be reduced to this shape.

For example, these two (temporary) sekis can be reduced to a bent four in the corner shape: 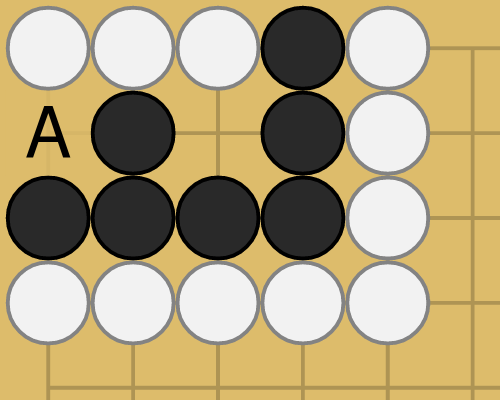 Above, white could play at A to force black to capture four white stones, in order to yield the bent four in the corner, with white’s turn to play. Similarly, white can play another stone inside in the below shape to do the same: 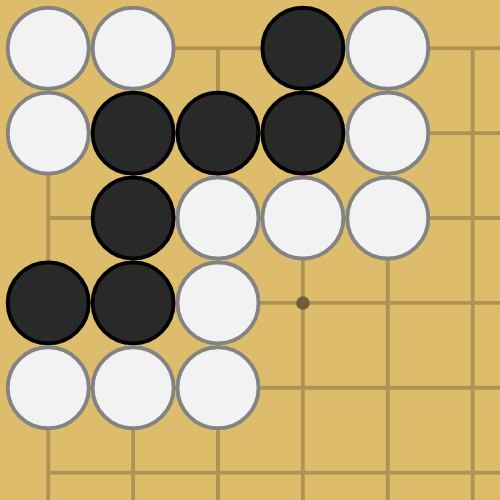 In these two sekis, black’s stones are usually dead, even if there are other big ko threats remaining on the board.

Under Chinese (and other area-scoring based) rules, white can wait until the end of the game to resolve this position. After other more valuable moves are finished, white can first remove ko threats and then initiate the sequence. The exception is if there are unremovable ko threats (like those that arise from a seki elsewhere). Under that exceptional case, it may turn out that black’s stones in the corner are strategically alive (see Life and Death under Chinese Rules for an example).

Under Japanese rules, white can simply leave the position untouched and then apply the special ko rules of the life and death resolution procedure, which essentially disallows any ko threats besides passing. Even though black’s corner may be uncapturable during normal play (due to large, unremovable ko threats), white can still argue that the stones are dead by not initiating the ko fight during the game.

I was hoping that this thread would start more discussion and participation. As a prompt:

Eight stones on the second line are alive

Why hadn’t I seen this thread before? I’ve made the L-thing mistake countless times. 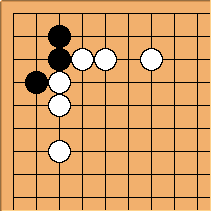 I don’t know why, but I’m able to edit all your posts in this thread that have an image in. I added a little dot to your last post to show this. First time I’ve been able to do this and I have no idea how.

Edit: Oh, you set them up as Wiki pages! Gotcha. I’m dumb.

Edit 2: I removed the dot again

Pages any trusted user can edit, I guess.