This arrangement of white stones is called “the L group”: 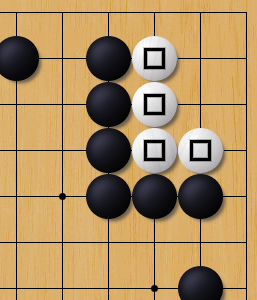 It comes up a lot in games, so it is quite useful to know that it can be killed even if white plays first!

Here is a collection of 10 puzzles I created to help you practice killing this shape:

Let me know in this thread if you…

I’m planning to make a video walkthrough of the puzzles as well, but it would be great to have some feedback first so I know which parts to spend extra time on!

What a nice collection! I found the “play away” variations particularly helpful, since I don’t usually think about what move make the L group alive again.

It looks pretty nice, I didn’t spot anything with the variations or the comments. 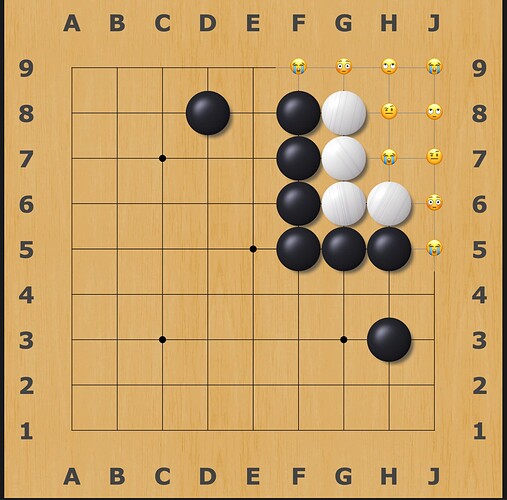 You’ll notice I almost ran out of symbols on that last screen, good to know I can resort to emoji next time!

The emojis were more for a bit of fun anyway the emoji version in case it shows wildly different or worse not at all!

It was more just custom labels in case you do run out. That is shift+click with the letters tool selected, and then add whichever letter, number, symbol etc.

The emojis were more for a bit of fun anyway the emoji version in case it shows wildly different or worse not at all!

Good point. I forgot to hit the save button after unchecking the box 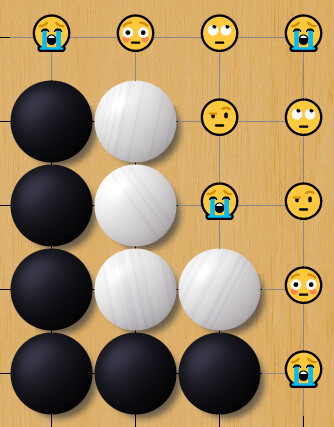 A trick for remembering the killing miai pairs

Yeah I have to agree that that one does look better

I included the final summary diagram because I think it’s quite neat how the refutations come in pairs (and of course this is not a coincidence, it’s because white playing at both points of any of the pairs would create a living shape)

That said, memorizing this image is probably not the best way to learn the shape! Instead, once you’ve played out all the variations and internalized them, the right moves will just be instinctive (and this instinct will also help you in similar but not identical shapes).

Also, there are often multiple ways to kill, and you have to pick the right one for the situation.

In the position below, A is perhaps the most obvious way to kill since it reduces the shape to the well-known bulky-five. But actually B is usually the correct move! 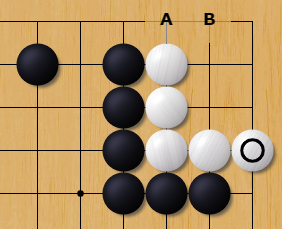 Exercise for the reader: Why is B better than A?