[Suggestion] Visualize the counting process like on a real board

I just wanted to put it out there, I think it would be a fantastic learning tool if there was an option for OGS to move the stones around for counting at the end of a game, the same as is done on a real Go board.

The purpose being to simulate the traditional counting method, as a cultural artifact, as a learning aid, and because it looks cool. I think it would be a great resource to see how counting actually works and make it easier for people to transition to in-person Go boards.

Accurately capturing the traditional method in an algorithm is tricky, since it’s a matter of style. Personally I feel that Japanese-style counting would be most clear, but I’m not a programmer!

You want an AI to move the stones around to make rectangle zones?

That’s actually a pretty cool idea. But probably a project outside the scope of OGS.

If someone successfully makes such an AI and it is open-source, then it will time to suggest to incorporate the feature on OGS

I don’t think it is an “AI”, just an algorithm for going around the board picking up stones, putting them down, and making areas in each surrounded territory. I do not enjoy programming in my free time, but people in discord seemed to like the idea so I just wanted to put it out there.

From my limited knowledge, I would say something like:

I am not sure how the movement of stones would work, that seems like the hard part to program. Maybe the first step is a problem to draw lines where the minimum territorial borders are, and then the next step is to move stones around.

This sounds complicated, but like a really neat programming problem. I’m super interested to see a proposed solution.

It’s certainly far out of the scope of my abilities - if I can’t do it with for loops and nested if statements, I won’t bother even trying

The “AI” might simply solve an optimisation problem, as follows.

Step 0. Start with a go position after both players have passed. Remove the dead stones.

Step 1. Mark every intersection of the board with one of the following five labels:
White stone, Black stone, White territory, Black territory, or Dame.
If using Japanese rules, if there is a seki on the board, then all intersections involved in the seki must be marked as Dame as well, including the stones and eyes.

Step 2. A “solution” of the optimisation problems consists in changing the labels of any number of intersections, with the following rules:

These rules guarantee that the score of the game is unaffected.

Then, the optimal solution is the solution that

Sounds like a very good exercise in constrained optimization! Those rules are a very nice step to understanding and phrasing the problem.

Doesn’t seem easy. You may need to split a territory into several rectangles, among other problems. 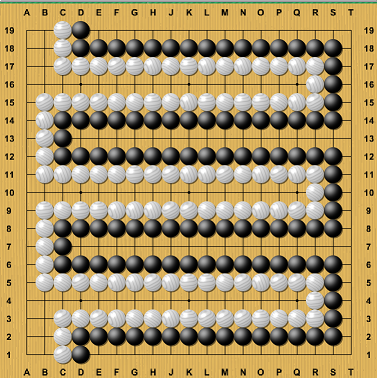 Minimising the number of changed labels is easy to formulate. Maximising the rectangularness is the harder part.

Idea 1
“Maximising the rectangularness” might be reworded as “minimising the perimeter”. Now we just need to find a good definition for perimeter of a territory.

We can define “perimeter” as follows:

Idea 2
A territory is a rectangle if and only if it is convex. So we can add penalties for every concavity in a territory. A concavity is an intersection which is not in the territory, but is adjacent to at least two intersections which are in the same territory.

Not sure if this is worth noting, but there’s another “axis” on which go players tend to maximize during the scoring phase: “round numbers/multiples of 10s/5s” that’s why you see stuff like: