I’m in a game where I believe the board is about to repeat a previous position. That depends on my opponent, but it seems likely.

As stated in subject, we are playing under Japanese rules.

What should we do? Is he not supposed to play the move that would result in repetition?

This situation hasn’t come up for me before, so I’m looking for guidance.

There is no superko rule in japanese rules. The game becomes void if the board position is repeated in a cycle and neither player wants to give in. 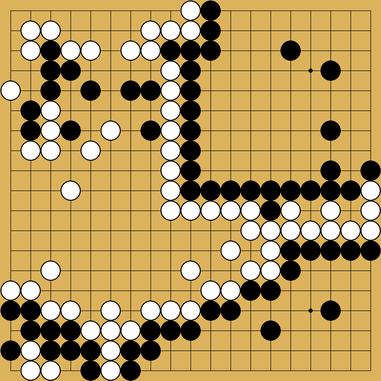 Assuming my opponent doesn’t play any more in lower left corner, how is it scored?

As Pempu pointed out, the bottom left is a seki position.
As you’ve noticed, it can also be played as a cycle. However, this is not the typical type of cycle.

Under Japanese rules, black loses a point (since white captures two while black only gets one) every time he forces the cycle to occur and also gives white a free move elsewhere.

If black were to insist on playing this cycle endlessly (even with white passing on his free move at the end of the game), I don’t think it would be considered the same as playing a triple ko cycle endlessly, and shouldn’t result in an annulled game, since the points are just pilling up in white’s favor in each repitition and will more than compensate white for eventually just giving it up.

Certain computer programs will play this out endlessly.