My name is Alex, and I’ve been playing Go for a few years on and off now. I live in the southern United States where Go isn’t very well known, and would like to spread its unique beauty to my area. I’ve shown some of my friends and they love it, but now I feel that creating a Go club in my community is something I’m interested in.

I’m currently a first year teacher of music at a small public school, and so I’m quite busy at the moment. That said, I have a passion to study and get better in my free time so I can become strong enough to really give good guidance to new players. I used to be a 6k on KGS, but either I’ve gotten worse, formed bad habits, or OGS rates much harsher than KGS, because my current rank is around 10-11k.

My goal is to reach Shodan before the next school year. I know I have a lot of work, but I’m willing to do it if it means I feel confident enough to lead more people to the path of Go.

I’ve been spending more time reading books and internet resources lately. I’m getting stronger, but I would like a teacher to show me where my game is weakest. Someone who is available to see my growth and guide me the way I want to guide others and see their growth. I know I’m probably asking too much, but even single teaching games would help me immensely.

Tldr: I want a teacher so I can be strong enough to confidently start a Go club in my community.

Have you tried using bots to review your games? I took a look at https://online-go.com/game/14602054 . The treatment of o17 invasion is quite bad, and it’s easy to see with a bot. I recommend goreviewpartner and lizzie for reviewing. Simply look for moves where you lost more than 10% winrate (maybe more if you get too many moves) and look at the alternatives. 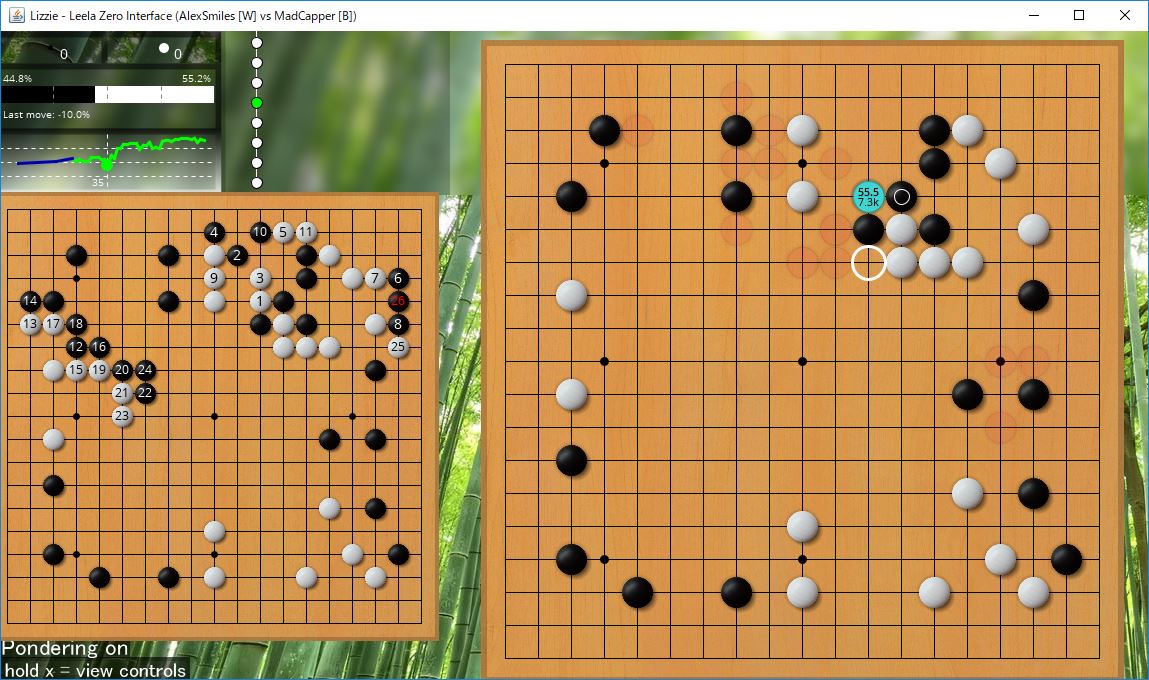 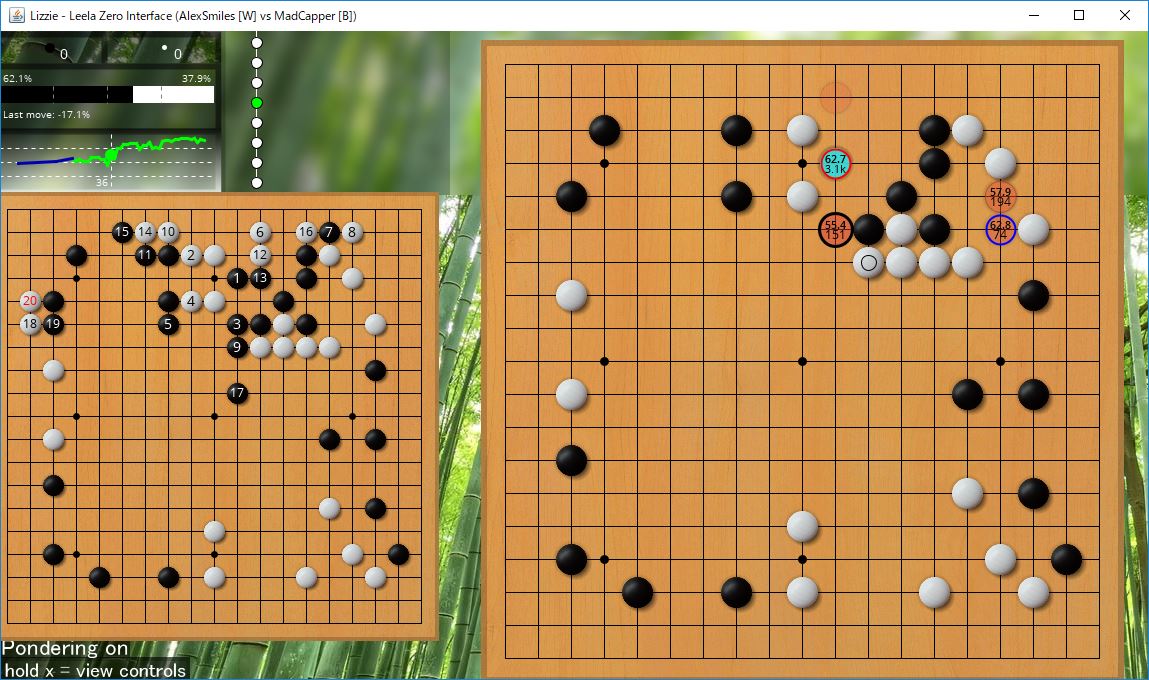 Well tbh, it really is a lot to ask to have a “teacher” who would help you on some regular basis (as you say yourself). Maybe a compromise would be in order. Just post “good” games here you would like to review and I am sure there will always be someone stronger willing to review right now to sort of "crowd source

reach Shodan before the next school year. I know I have a lot of work.

You do, it is a long walk. I do not want to put you off (quite the opposite), but I would not personally set this as THE GOAL. I understand the motivation, I know the d letter is sort of a mental “milestone”, but should you not manage for whatever reason, do not let that stop you from creating a go club. Even at your current level you have TONS to give to beginners and go is a game where you can just enjoy growth together with others,

and sometimes I feel like too big a skill gap can even be a problem when teaching complete beginners. If you are good at teaching to a 20k it does not matter whether you are 4k or a dan. It will be fun either way

Also wanna share your online sources? Talk about what videos, texts you are reading or others would recommend to you?

TL;DR (since everyone is appareantly doing it - I wanna be a cool kid too)
I do not think you will find a teacher to spend that much time with you for free. Lets make it a group thing and a long going thread. It might be fun. I want that D thing next to my name too…

I think it’s a terrible idea. If you condition your opening a club on something that won’t happen, you might as well just use something you’re confident with and start a band instead.

Edit: I just noticed that you may be talking about a regular Go club, not necessarily at school. I think it would be easiest to start one at school though… just read the rest with my possible misconception in mind.

What students need isn’t a teacher who can crush them, what they need is someone who loves the game and offers the opportunity, location and materials for them to play, who does the paperwork and maybe organizes trips to local tournaments. If you really want a strong player to teach every now and then, look through your local AGA chapter/rating list and get on the phone.

But believe me, the faster they beat you, the better.

Alexander Dinerchtein was taught by his 10k father and look how he turned out. Second, here’s an excerpt from an interview with the Dutch champion Rob van Zeijst:

“When and how did you start playing Go?” I started at the age of 8 when I broke my arm and my father his leg in unrelated accidents. I could not attend school and he could not go to work. So we had plenty of time and we played chess, checkers and some other games. My father beat me in chess most of the time, so after a while that got boring. Then my father remembered another game he and his older brother played a few times when they were young. He explained the rules to me, we started playing and… I won the very first game! Wow! I could beat my father! For an 8-year old boy, nothing could be better and I got hooked on the game. That is why I now play go and not chess…

The OP wanted “a teacher to show me where my game is weakest.” If you go through the game quickly you would see the blunders easily. And if you played big moves when there are no urgent moves, then I assume even if they are not perfect you won’t get a huge winrate loss.

Personally, I’ve reviewed a few games with goreviewpartner. Leela pointed out at least a few tesuji I should have played in each of those. It takes significant amount of time for a teacher to (1) go through one’s bad middle game and (2) identify the biggest mistakes and (3) point out the correct moves. Believe or not, this is quite hard. A Tygem 4d friend played a 2 stone handicap game with a 9d. After the 9d reviewed the game, we ran it through goreviewpartner. I would say the evaluation of the 9d is way off: when he think he already got the lead, he’s way behind. In a group where he said the 4d messed up, there’s a good sequence he didn’t see that could have helped the 4d a lot. The 9d also told me that I should only learn from the bots, if that lends me some authority.

If you insist to play human-like… perhaps you can use the original leela? I think it’s trained with human games and uses an opening book.

I can’t speak for Dwyrin. I did attempt to paraphrase the two main points, for those not interested enough to spend 30 mins listening

However, just my own understanding: I don’t think the argument is whether the play is human like or bot like.

The caution is simply that Dwyrin, a 4d, can’t understand the advice the bot is giving, and suggests he that it’s not helpful, so maybe we mere SDKs and DDKs should approach it with that in mind.

If you’re aware of it’s limitations (such as “if you open like it does, prioritising 3-3 invasion of 4-4, then you will be faced with a whole board reduction that it can handle but you can’t”) then surely there might be some lessons from it as well.

After reading all of your responses, I think you are ALL right.

@pokeii I had no idea that there was a bot that could help review games! I’m going to definitely look into it.

@AdamR @smurph You hit the nail on the head. Your arguments make perfect sense. I was just really enthusiastic at getting better - using a club as motivation to work harder. I realize now that that’s a bit out of order. I have had experience in teaching new players, and coaching them into being stronger through teaching fundamentals. I am just so afraid to teach someone bad habits. That said, it’s not justification enough to warrant an excessive goal.

I think I’ll just play games with strong opponents, keep reading books, and see how far my passion takes me as far as personal strength. As for the club, while I am busy, I think I will go ahead and contact the AGA like you pointed out and go ahead and see what I can do there. Even though I only have one board and stones, I’ve shown a few students what Go is and they seem to be interested. They also like anime, so perhaps I can hook them on Hikaru no Go.

TLDR: Thank you, everyone, for your insight. I think I’ll continue on my personal path and hopefully get enough students/community interested for a Go club after contacting the AGA. Y’all rock!

If you focus on the moves where you lost most win rate, you perhaps won’t run into those issues very often. It’s quite hard to lose a lot of win rate in a move at the beginning. I used goreviewpartner to go over that game to find the “worst” moves in this game, and it was that sequence. From my experience for most games (OK, dan amateur-pro) the large win rate delta are in the mid game, and the cost of a bad move is big. My rule of thumb is, if you lose more than 10% leela zero win rate (ELF is more stiff), it’s most likely a blunder and should be studied carefully. 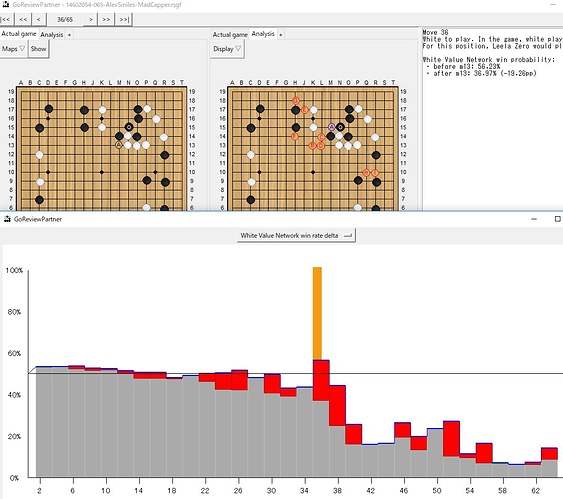 One more thing. You don’t need to take all the advice in there, but it might be an interesting read: “Go as Communication” by Yasuda Yasutoshi.

True - this might be paraphrased as “you can certainly use it to find blunders, but it’s advice what to do next comes with caveats”.