I’m curious what other people think of this.

Here’s the interesting part for me:

White gets a choice - move diagonally across from Black, cementing the fact that each player will start with two corners next to each other. OR White moves in one of the corners next to Black, which gives Black the option to decide if they will play with opposite corners or adjacent ones. Now, I assume that by White playing this way, White believes they had an advantage by allowing Black to choose opposite corners over adjacent ones.

There was a guy on KGS who didn’t like diagonal openings and had a note in his game offer to that effect and would resign if it happened, who didn’t seem to realise he could stop it

Also I used to think diagonal openings would favour white with the komi, but AI seems to like them as black. So now I go for them as both colours depending on my mood.

This is a good thing to be aware of, and part of the reason why cross-fuseki is relatively rare!

But cross-fuseki is perfectly playable for both sides (even at superhuman levels), so it doesn’t mean that one player must have made a mistake for it to occur. At any level below perfect play it’s a matter of preference (which kind of game are you more comfortable with?), and even with perfect play it could be the case that going into a cross-fuseki doesn’t lose any points for either player.

I generally play in one of the adjacent corners as white, to allow black to play a diagonal opening. I do it out of courtesy and because it enables more diversity during the opening.

I do it out of courtesy and because it enables more diversity during the opening.

Correct - my analysis depended on the notion that players were making choices that they thought helped them win the game, not out of courtesy.

Not a mistake, no. I’m just saying both thought that it would be advantageous to them, and mathematically - only one is correct in that belief.

mathematically speaking, all moves are either optimal or a mistake.

So if that’s something you think is part of the advantage of going first then choosing adjacent corners makes sense.

But it could be the case that both players are ok with both!

So for instance two different AI:s can both think they have exactly 50% winning percentage both in a cross-fuseki and in a regular fuseki. (so neither player thinks cross-fuseki is adventageous for them, just one of multiple equally good options)

Or if we think in terms of perfect play, in each position there can be several moves that lead to the best final score, and this can very well be the case when a player chooses to go for a cross-fuseki or not

Interesting - I hadn’t even thought of what the AI would say.

I generally think that diagonal openings lead to a more complex game, and as such usually favor white? I use them a lot in my absolute timed gamed because I think a more complex game favors the person with more experience at time management, but that advantage goes away if they are 3+ stones more advanced than I am.

There is this “traditional” (since the invention of komi) belief that cross-opening benefits white.

The reason this is because it is/was thought that while black, by the virtue of getting to play first, can build up bigger frameworks and moyos than white, so if the board turns into “big moyo vs big moyo” kind of game, black will have the advantage.
However, because of that first-move advantage for black, and because white is compensated by gaining komi, white will benefit if the board ends up into multiple small groups all making just handful of points each. When the territories remain tiny and some groups are just barely living with few points, then the komi is like having one extra group on the board.

Because this idea, people used to say that cross-opening is good for white since it helps chopping down the board into potentially smaller areas. White should be happy when black is not fully utilising his advantage of being one move ahead in development.

Bunburyist it seems to me that you are simplifying too much in your argument (in the opening post). You would be right if it was only a question of cross opening vs. non cross opening, but there are many nuances regarding the exact position of the corner stones.

two different AI:s can both think they have exactly 50% winning percentage both in a cross-fuseki and in a regular fuseki

Agreed there. But AI looks at the objectively most optimal strategy, and I agree there is no difference for that. What I’m talking about is the best play for this specific White versus this specific Black, and in that case I don’t believe there is any situation where the outcome is neural.

Now, you can have a case where White opts to allow a cross opening, and in 98% of cases that’s advantageous to him, and this specific Black happens to lay in the 2% where it is sub-optimal. 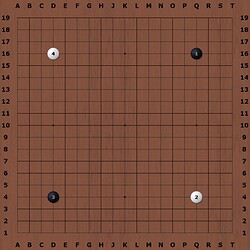 … I claim that all moves are optimal (i.e. in the corresponding position where the move was played, there is no other move that is strictly preferable). Can you prove that this claim is wrong?

Can you prove that this claim is wrong?

Well, for starters, I don’t care to prove anything wrong or right, I’m just having a discussion. For second, if someone suggests a truth, it is up to them to prove it, not to others to disprove it.

But as I said in the post above, I am not talking about game theory optimal questions. What a computer or AI considers optimal is not of interest to me in this question. I’m looking at an actual human player on Black, with his/her strengths and weaknesses, and an actual human player on White. And in that world, there is very nearly zero chance that crossed opening does not advantage one player or the other.

there is very nearly zero chance that crossed opening does not advantage one player or the other.

Sure, and the same is true for non crossed openings.

Sure, and the same is true for non crossed openings.

they have arrived at the crossed open precisely because both think it favors them.

Not necessarily. I play both kinds of openings because I think it’s indifferent for me.