The kosumi shimari -- the eighth enclosure?

In 2020, we have seven enclosures considered playable: the 4-4 ogeima, 4-4 keima, 5-3 & 5-4 “cloud shimari”, 3-4 two-space jump “AlphaGo shimari”, 3-4 one-space jump, 3-4 ogeima, and 3-4 keima. Four of these structures have come down to us from antiquity (the smaller 3-4 enclosures and the cloud shimari.) The 4-4 enclosures (in isolation) emerged more recently, in the 1920s-30s Shin Fuseki period (correct me if I’m wrong here.) The AlphaGo shimari only became popular around 2017, for obvious reasons, completing our current zoo.

Then I saw this thread by mark5000 (well, via the rank guessing game): ELF OpenGo weirdness. Here ELF, a bot created by Facebook (iirc) repeatedly suggests in a deep search that Black should make early enclosures using a new shape: the “kosumi shimari”. Could this be the eighth playable enclosure?

The kosumi shimari is the smallest enclosure yet studied. So can it make up for its territorial humbleness by resisting forcing moves? 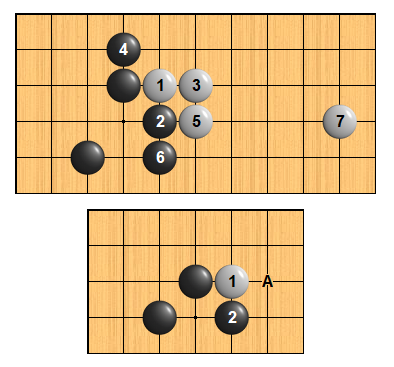 When an attachment is made to the side of the small shimari, Black must descend with (4) to protect the corner, allowing White to create a good shape; White often gets both a turn and extension. In comparison, when the side attachment is played against the kosumi shimari, Black (2) already creates a perfect tiger’s mouth shape. This means that Black doesn’t need to descend, making White A locally gote and allowing Black a pincer.

The side attachment is also a popular forcing move against the large shimari, where White can (if Black cooperates – let’s not get into that right now) get a relatively good shape on the side, eg. to begin an invasion. Against the kosumi shimari it appears more difficult as White cannot get enough liberties to force against Black’s shape. 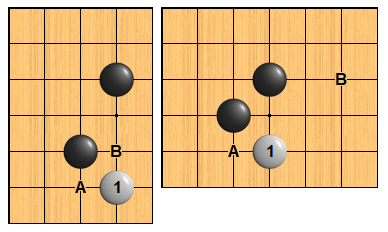 When the shoulderhit is played against the small shimari, Black will often respond at A or B, as one usually responds to a shoulderhit on any other stone. If Black ignores the hit, then White A, Black B can give White momentum on the side; or White B, Black A can enter the large avalanche. If Black tenukis the shoulderhit on a kosumi shimari, then the obvious path is White A, Black B transposing into a kick result. It’s unclear how this compares.

Altogether it seems to me (a mere 5k, ofc) that the kosumi shimari is playable and worth experimentation. I’d be interested to see how other, especially stronger, players approach playing with and against this structure.

The KataGo self-play game (continued from an ELF OpenGo v2 sequence) that kicked off the discussion: https://online-go.com/review/433241