Well, I still cannot understand why the supposed solution would be the case.

I just do not see why, if there is an equal chance of each door containing the car, the intervention of Monty – without moving the car – would affect the probability.

The impression I got was that the problem somehow relies on second-guessing Monty’s psychology and plans, through the application of unspecified conventions, but now the insistence seems to be that it’s somehow mathematically minimal in a way I can’t penetrate.

I’m reminded very greatly of the time when Numberfile claimed high and low, using sophistic mathematical reasoning, that the sum of all positive integers was -1/12 before being soundly disproven and having to issue an apology.

I never pursued mathematics at a high level, so I’m inclined to stop wasting other people’s time in a probably vain pursuit, but I would still not vote switch or pretend that I’ve been convinced.

The “mathematical sophism” I alluded to: 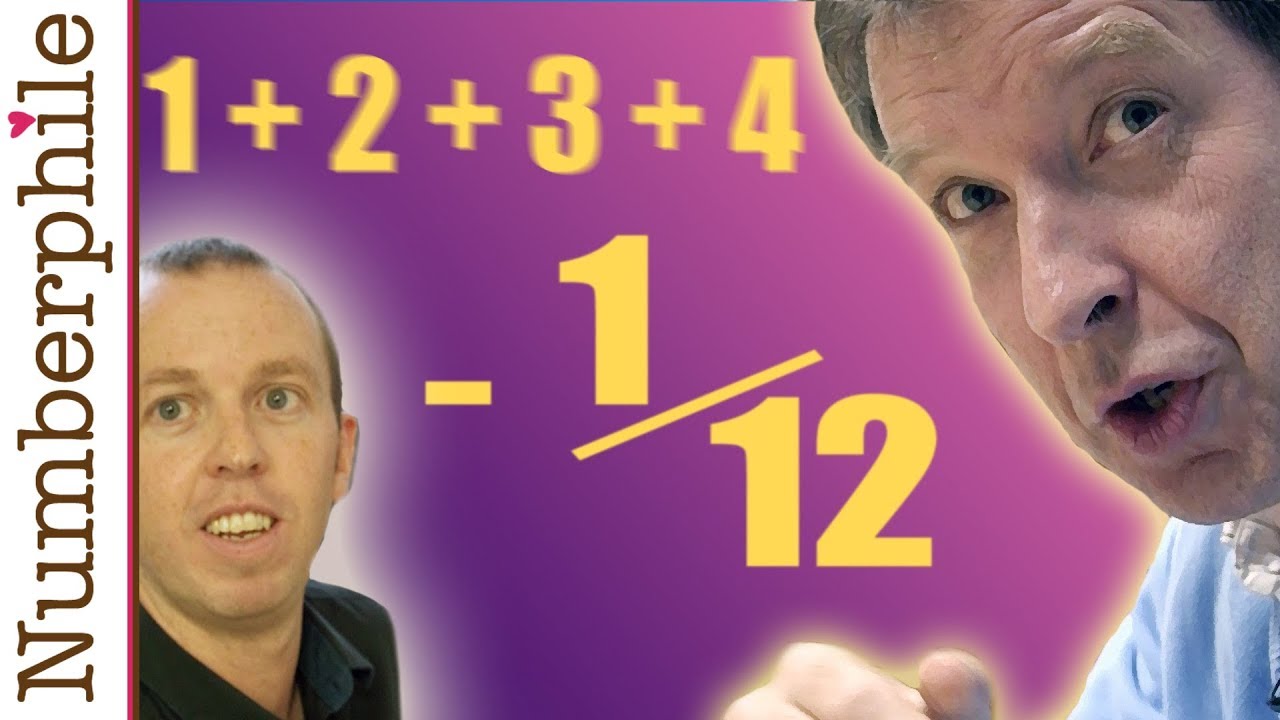 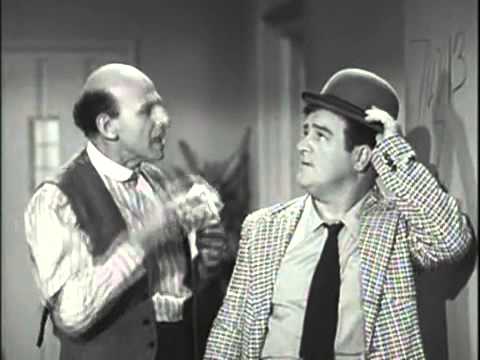 There is no guessing of psychology, since this is a mathematical problem. You could easily leave Monty Hall out of the problem statement and talk about an algorithm going through his actions.

Moreover the rules are simple: you get to pick a door, after that a goat will be revealed to be behind a different door than you pick, then you get the chance to switch or not. You know all of this when you pick your door as well.

Hence switching will give you the car in 2/3 of the times (namely whenever B) happened).

Note that Monty’s influence on the game is that he essentially eliminates one of the goats from your choices. His opening of a door does not change the probability that the car is behind your door: it’s still 1/3. However, he removes one of the other options for you to pick, thus by switching you move from your 1/3 chance of picking the car initially to the remaining chance of 2/3 that the car is not behind your original pick.

I’m reminded very greatly of the time when Numberfile claimed high and low, using sophistic mathematical reasoning, that the sum of all positive integers was -1/12 before being soundly disproven and having to issue an apology.

I have to admit that the Numberphile video skips over a lot of very important disclaimers, but the message in the video is not “simply wrong”. The problem lies in that they are not using the “normal” way of looking at an infinite series, but using a different way.

We say that the series is convergent to a value X, if for every ε > 0, however small ε is chosen, there exists some n such that for all m>n we have -ε < X - Pm < ε. In other words, however small we make the area around the value X, there will always be some step n after which all of the partial sum lie in this small area around X.

Or in the Numberphile case, that 1+2+3+4+… has no value, if we evaluate it using the “normal” way of evaluating infinite series.

The “mathematical sophism” I alluded to:

I rewatched the video, and I was perhaps a bit too kind above.

However, in the video they try to explain it with “intuition”, which is not at all a healthy attitude with divergent sums. For example, shifting values in infinite divergent sums has a great impact on its partial sums. In fact, even for some convergent sums this is more or less a deadly sin: by rearranging the terms of a sum like 1/2 - 1/3 + 1/4 - 1/5 + 1/6 - 1/7 + … I can get any value I want.

So, the bottom line is, that the video tries to explain a meaningful and astounding mathematical idea in a way that makes absolutely no sense. The steps are correct, the explanation is not.

Here’s a better video about it. Knowing Mathologer it should be easier to follow than the Numberphile video: 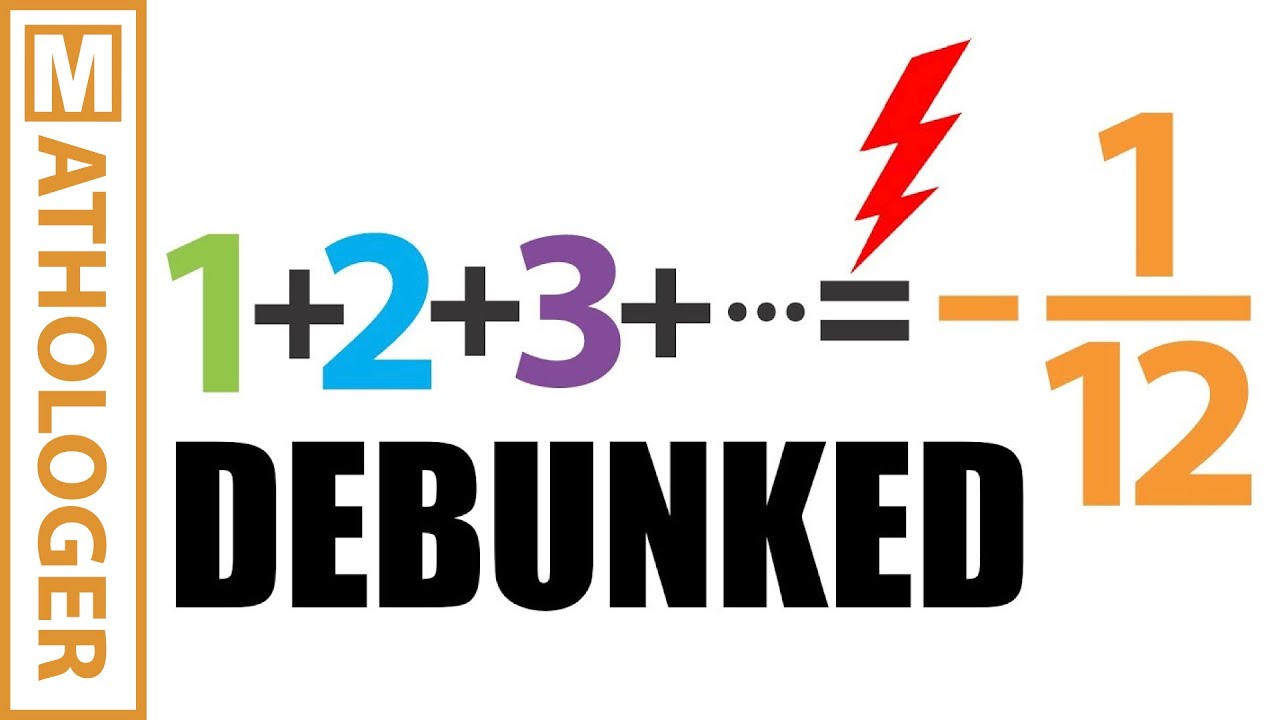 me trying to understand the Monty Hall problem

We got another one here, @BHydden !

Well, your probability of achieving a favorable selection has improved. I would call that “better off”.

That depends on how the option is eliminated. If Monty doesn’t know where the car is, and is just as surprised as you are at finding the goat, then you won’t improve your chances of getting the car.

That’s not how the Classical Monty Hall Problem is defined.

But fair enough, if we have an evil Monty Hall, who only offers the switch when it would imply switching to a goat, then even my pedantic correction would be false, since the extra information in such version would be that there’s a goat behind the door when you switch.

To go back to the poll: 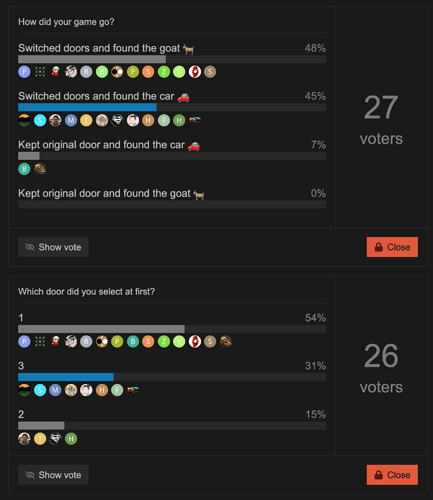 I like that the experimental chance of finding the car when switching is only about 50%. The reason being that the car is fixed behind door number 1, and here on the forum, it seems we’re not at all choosing our door with a uniform random distribution.

I meant to say a bad option is removed. You got me. Good one.

My son actually did a school science fair project on the Monty Hall Problem a few years ago and I helped him write some python code to run some simulations and plot the data with matplotlib. 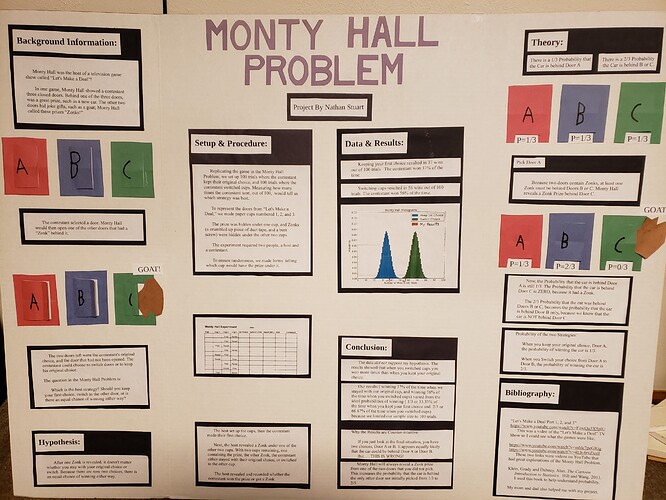 Yeah, I was hoping that forum users would behave more randomly, but there seems to be a bias for picking door one. I selected door one by actually rolling a physical die (to prevent hackers).

I got assigned door 3 by random.org

The easiest way to become convinced of the correctness of the standard solution is to ask a friend to sit down and literally simulate it with you with a deck of cards, and run it like 100 times, without switching, and 100 times with switching. (Although, I guess in COVID times this may be harder

) Or rather, make it more extreme, with more doors, for example, 13 doors, represented by the 13 cards of a given suit from the deck of cards. Then you can do a lot fewer than 100 runs and get very high statistical confidence.

So the protocol would be:

(with 13 cards/doors, twenty total trials should be enough that with extremely high likelihood, you will get the right result even if you get pretty “unlucky” on a few trials).

You’ll likely find your brain very quickly latches on to the correct intuitions once you see the actual results in-person, staring you in the face, over a bunch of trials.

“Monty Hall always chooses a door with a goat, but prefers the right-most door to not have to walk so far”

wouldn’t that mean if he ever walked past the right door, it would give away where the car was??

I thought Monty also didn’t know where the car was, so as not to give anything away, and he would be told through an ear piece which door to open?