The Randomest Questions with Answers

This is not really forums meta, but somewhat site meta for the main site I guess. I just go throughout my day on the site, but then I will discover something and have a question about it. Many times they can be the randomest questions. Many of them a mod didn’t know the answers to, so I decided to test out the different questions. Sometimes it is things I have been shown that seem random or things I find that seem random or things in between. I am not putting dates with these because those dates seem unnecessary. I also created 4 guinea pig accounts for some of the tournament questions, but I made sure to resign from the game without turning the game into a ranked game(up to 1 total move so it auto annuls). I do not see any wrong in this, seeing as I could just get free trophies by being the only one in a tournament anyways(I’m not doing it though). I am not putting this account through the testing because I don’t want to be accused of cheating when it isn’t really cheating. I am going to somewhat follow the FAQ thread by having the questions as replies, unless the system wants to be annoying, and I will bring one of the Guinea Pigs I made and post using it to make it so I don’t have more than 3 replies in a row.

Question 1. What would happen if I was the only admin of a group and then unadminned myself?
Answer: The group just exists with no admin forever. Not really a big deal except for if you really want to kick someone, post news, or set rules for the group. Anyone who wants to see the group: https://online-go.com/group/5391

Question 2. What is the smallest amount of people I can add to a tournament or have the max number of people be(this is a question after someone taught me that you can have a tournament with 1 member).
Answer: You can put the minimum number of required people at whatever number you would like, including negative participants, but don’t ask me how you would have -4 members. On the other hand, you must have at least 2 in the max number of people for the tournament, otherwise the tournament won’t start. A tournament will still start if it has 0 or 1 participants, but if you put the max # of people as 0 or 1, it will tell you “You need at least two players in a tournament”. This does not mean that you need 2 people in that tournament, it just means that you need to put the max # of people at least at 2.
Test tourneys that actually happened relating to this:

Can you have 0 people in a tournament?


After the 0 people test tournament, I moved all of the tournament tests to the group Sup People so I didn’t spam my group Our Go House with tournaments irrelevant to most of the group.

Test using 4 guinea pig accounts I made. Trying to see what it does to change players points in elimination tournaments. No worries about the accounts, you will probably never see them again unless I test something else out. Please do not ban me for...

Question 4:
Is it possible to tie in a tournament?
Answer: No. In the first tournament GP4 won(last to join both the tournament and the site(site joining was number order 1, 2, 3, 4)). In that tourney, GP4 won, GP3 got second, and GP2 got third. I then was unsure if it mattered the order they joined the site or the tournament or by order of invite. I then created another tournament in which they joined 4, 3, 2, were invited 3,4,2, and still joined the site in the same order. I assume that it is just random what person ends up winning after all of the tiebreakers are over(Points, Status, SOS, SODOS, Rank)-these accounts are all unranked with no ranked games played except for annulled tournament games.
Tournaments:

This is a test to see if you can tie in a tournament. 3 people round robin, each with 1 win, 1 loss. All the same exact rank. Who shall win the tournament? It shall be like rock paper scissors. Guinea Pig2, you shall be rock, Guinea Pig3, you shall...

This is the test to determine who wins these tournaments if they are a tie after the 5 tiebreakers: Status, Points, SOS, SODOS, Rank. Last time it was reverse order of joining the site and the tournament, so this time, with the same participants,...

Note: You can also use the beta site for these kind of experiments. https://beta.online-go.com/overview

Whoever wins the final match gets the win. After that, I think it is done by points.

I wonder if this is related to a recent report (that I now can’t find) of someone recieving bronze after losing the final match in an elim tournament? The points may be skewed by byes.

I may have completely forgot about the beta site while making this. Well on the bright side, I have 4 random accounts if I want to have more tests. What else are the 4 Guinea Pigs going to do(besides fill up my friend list with accounts I may never see again).

I did see that post about getting a bronze trophy after making it to the finals. If this is screwed up from byes, wouldn’t the result still be the same? You either play, or you get a bye. You get 1 point per win, and 1 point per win. I think that this should still make it so both people in the finals get a trophy, unless someone changed the points in any way.

I have something! (I posted this on the General Discussions thing as well) The longest tournament possible is one which a) takes the longest time possible per round, and b) has the most rounds per player.

Byo-Yomi is best for maximising time per round (yes, I know I spelled that wrong, but I can’t be bothered to correct it!). It is better than Absolute because (duh! I shouldn’t have to explain this, but it’s main time is equal to the Absolute timing’s maximum time). It is better than Simple because it is basically simple but with more periods. It is better than Fischer, because, when pushed to the limit, Fischer is equal to Simple plus Absolute. However, Byo-Yomi is Simple * 300 (I code, so I like *, instead of x) + Absolute, which is better than Fischer. Canadian, when pushed to it’s limits, is basically a worse version of Fischer. Also, you should use a 19x19 board.

To maximise (spelled it wrong again! :)) tournament rounds, Double Elimination is best, for it gives (optimally) log 2 of player number * 2 rounds. However, it is only better than McMahon for 64 or more rounds, as for less than 64, log 2 64 or less times 2 is less than 12 rounds, which is the round number you can have for any number of players.

(BTW, if you exclude superko, the game can go on forever! Including superko, the lower bound is 10^48 (10^170 board positions, but not all can be cycled through! https://senseis.xmp.net/?NumberOfPossibleGoGames))

Byo-Yomi is best for maximising time per round

How about no time, pausing forever, or just alternating vacation until you have to play a few moves.

Pausing forever would work. As for no time, I don’t think you can make tournaments with no time. Finally, you can’t alternate vacation, as (with both site supporters), the vacation regenerates at 2/5 the speed at which it is used, so you would still have to play moves, though this would lengthen the game.

I don’t think you can make tournaments with no time

I made a tournament with no time limits before:

With everything that is going on in the world today, many people are stressed. I decided to try and make a stress free tournament. There are no time limits so if you need to something else, you don’t need to stress out about timing out of one of...

Just tested it out. It is possible to pause a game with no time limits, although it is not possible to have auto weekend pause.


It is going to sit endlessly paused for a while until I go back onto GP2 or GP3 to resign. No moves will be played though. I would think that a no time limit game would last forever, and although I have no clue about those rules now, I know that they used to end at some point. If they can end by timeout, then the pause feature in these games makes sense, although not the what it calls this time setting: “none”. If they can’t end by timeout, the pause feature makes no sense for why it is there.
HHG April 26, 2020, 3:14pm #12

Couldn’t someone have two accounts and keep on winning, boosting there rank forever? When the rank difference got more than nine, you could bring in a third account, boosting the second account, boosting the first account! (Though the second accound would have to be boosted in the middle by the third account). Once this stopped, you could bring in a fourth account, and continue the process. This would take (2 ^ (ranks above 25k) / 9) * (games needed for 9 rank) games, so getting to 9d would take (2 ^ (33 / 9)) * (games needed for 9 rank) = (2 ^ (~4.5)) * (games needed for nine rank) = ~ 23 * (rank per nine games). Assuming that the rank per game is about 0.1, 23 * (~90) = ~2000 games. While this is a lot, and even though you would need multiple google accounts, it’s reachable, and you would only need to play ~3 games per account (2000 / 2, because each game affects two players) for a year to get to 9d+ - even if you were horrible. Note: since you own all the accounts, more games per account is probably achievable.

Couldn’t someone have two accounts and keep on winning, boosting there rank forever

even though you would need multiple google accounts

Why would you need multiple google accounts to do this? There is a way to create an account that doesn’t require an email at all unless you would like to chat(which most people do). If the account is only playing yourself, chat isn’t exactly necessary. My GPs don’t have emails because I decided they were unnecessary to have if they were only playing unranked games against each other.

I think that someone could also get banned for doing that.

Absolutely. Even where cheating is not the intention, I strongly advise against getting into situations (tournaments) where you might play ranked against yourself. Multiple accounts should be for very different purposes.

Also, in case you ever wondered, the furthest you can schedule a tournemant is december 31st 9999. And you can have member only tournaments for invite only groups that have 0 members, even if you are not part of the group yourself. Also the max amount for minimum amount of players is 999999999 ppl.

you can have member only tournaments for invite only groups that have 0 members, even if you are not part of the group yourself

Wouldn’t you have to start in or be in the group at some point for that to happen? I can’t create a tournament unless I go through a group.

the furthest you can schedule a tournemant is december 31st 9999

Did you know that you get different error messages for both of these?
The one with a start time in 10005 or so(well after I select the date instead of putting the date it says “invalid date”): 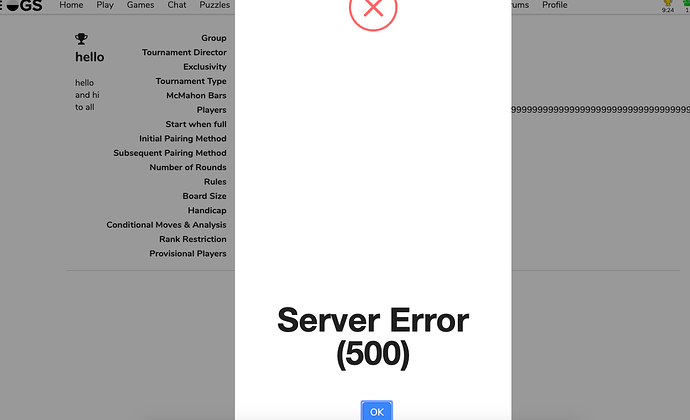