The root of XianXian QiJing (玄玄棊經) and its evolution

This is the continuation of the reply in this post about the root of XianXian QiJing (玄玄棊經) and its evolution to modern day versions we saw today.

For some more info: Xuanxuan Qijing at Sensei's Library Maybe @claire_yang can tell us more about this special collection? About XuanXuanQiJing(玄玄棋經) - 玄(Xuan)玄(Xuan)棋(Qi)經(Jing). First of all, its name is two part - XuanXuan (玄玄) and QiJing (棋經). QiJing(棋經) just means it is a Go Book (of classic), and the description of XuanXuan (玄玄) comes from the 1st paragraph of the Tao Te Ching (道德經, the foundation text of the philosophy and the religion of Taoism) - “玄之又玄，眾妙之門” - the concluding sent…

And I feel I procrastinate long enough, and has to at the moment finish the journey the best I could. I still don’t think I saw and searched enough first-hand manuscripts to have confidence to say how it is. Someone out there would definitely know a lot more, since I will be quoting some of their analysis to fill in the blank for the story. I’ll repost the first part of the content here to make it more complete, and correct some of the errors I found, and break them into parts (and I don’t have to finish them all at once

(to be continued, in the replies)

BTW, I did not forget the history and evolution of kyu ranking series. I had so many drafts, but honestly, its scope is way larger than I originally anticipated. From various materials I saw, they are in conflict with later reports and books that published after WW2, even interwar period sources sometimes contradicted themselves. And later claims seem to just pick one of them as how it should be. And from what I currently understand, all these different stories are probably true to a degree. There were variations and cultures difference regionally before travel via trains were cheap, and their regional evolutions differ and took time to converge. Besides, sources for the amateur scene are harder to find and from all different places, no one has yet collect and organized them in an orderly fashion. They are mostly just pieces here and there. Also, some sources I accidentally find in Taiwan and only here, since documents survived WW2 better, and didn’t get burned or destroyed. It’s going to require some real hard work to piece them all together as a whole story. A period spanning nearly 100 years from mid-19th century to post WW2, even up to 1960s, where amateur communities finally thrived again, and the system is finally in the form we recognize today. It’s going to be a real long-term project.

About XuanXuanQiJing(玄玄棋經) - 玄(Xuan)玄(Xuan)棋(Qi)經(Jing). Its name is two part - XuanXuan (玄玄) and QiJing (棋經). QiJing(棋經) just means it is a Go Book (of classic), and the description of XuanXuan (玄玄) comes from the 1st paragraph of the Tao Te Ching (道德經, the foundation text of the philosophy and the religion of Taoism) - “玄之又玄，眾妙之門” - the concluding sentence of the paragraph (where I am definitely not qualify enough to properly translate it, and certainly doesn’t just mean “mystery”). It has a deeper layer inside a layer, complexity on top of another, or foundation beneath the foundation meaning, like turtles all the way down, with an ambition to integrate all the known knowledge of Go at the time - a theory of everything and practices of Go.

The content is believed to be collected and edited during the mid-14th century (1349) near the end of Yuan Dynasty, and the oldest surviving text that organized the theory of Go into one. But it was based on previous works hundreds, even thousands of years prior. What’s unique about it, is what we would today called tsumego and joseki contents that were lacking in other ancient texts. And here is a brief introduction from sensei’s library.

You can find some of its tsumego from a modern version here (but in Chinese)
https://www.101weiqi.com/book/xuanxuanqijin/

The survival of this text is heavily linked to the emergent of printing press technology at the time, making mass production possible for the first time. With more copies, more were likely to survive. Although, we are not sure if some of the copies we have today in museums or libraries are in fact the original copies printed in the 14th century (most likely not, and most would agree the versions we saw are more likely from the Ming dynasty, maybe a century or more later).

I’ve found the first Chinese translation version of the Japanese Hashimoto Utaro version from 1985 in my local library. 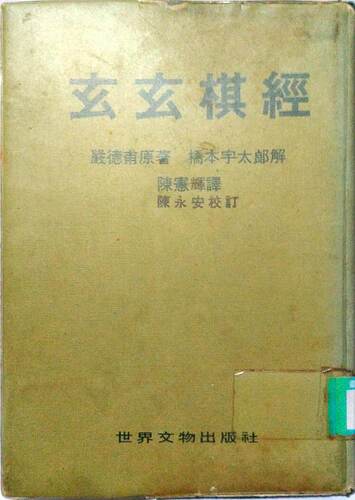 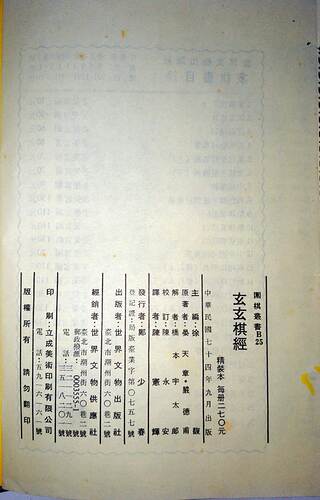 It has some interesting integration of the ancient Chinese version with the organized near-modern versions, which again derived to more recent versions. This kind of re-editing gave some insights about how different versions in the past must have going through similar process where contents were reinterpreted and reorganized, even added. Like here are two tsumego problems call 玄妙勢 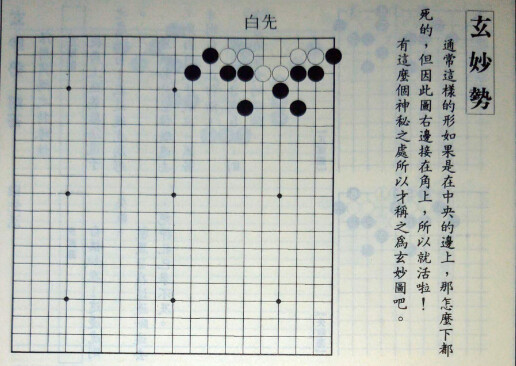 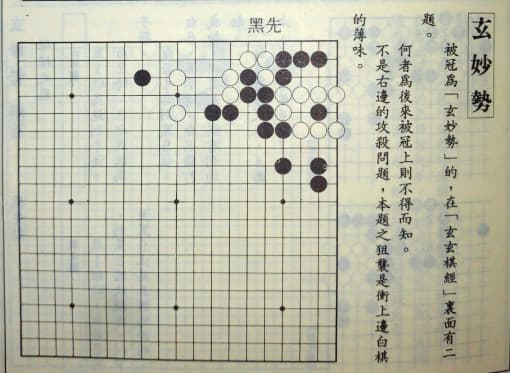 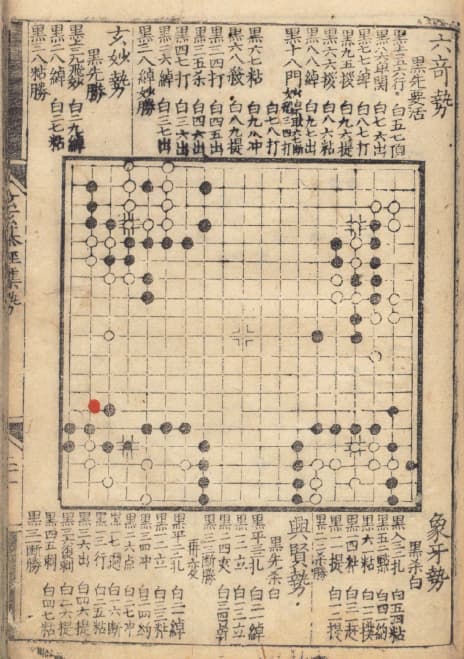 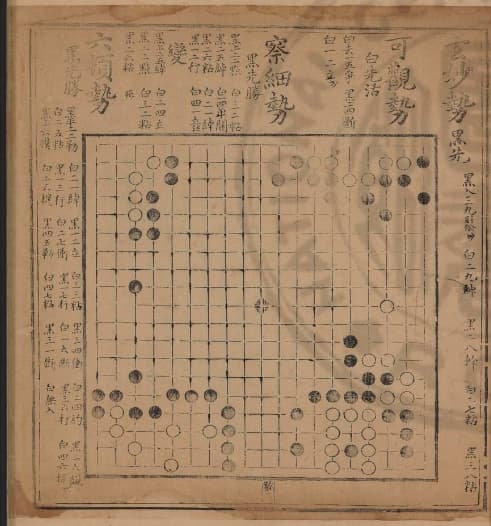 We can clearly see that even though the name might be borrowed from each other, but they evolved into completely different tsumego when they were separated for hundreds of years, and only when modern versions try to merge them, we discovered that along the way, people had added more to the collections.

3 Likes
Interest in Go and Connections to CJK Cultures