The Second Book of Go: Question about Capturing Races

It would be nice if someone could help me with this.

So yesterday I partly read ‘Chapter 7 - Counting Liberties’ of Richard Bozulich’s ‘The Second Book of Go’.
And then I came across this position in James Davies - Life and Death (Chapter 3 problem 1):

I first thought that according to ‘The Second Book of Go’ this should be a type 2 fight (two or more inside liberties) and the result should be seki.

If Black and White have the same number of outside liberties and there are two or more inside liberties, the result is seki.

But in this case white can kill by playing A

Then I thought actually it should be a type 3 fight (One eye versus no eye) because black has an eye here right?
But that also doesn’t work:

In a fight where one side has an eye and the other doesn’t (Type 3 fight), the position can never become seki.

But in this case black can indeed make a seki by playing A, right?
So what am I missing here? Is this maybe an exception because white can make a killing shape?

And do you apply such ‘rules’ in your games/capturing races or do you rather read out each position?

I haven’t read the book but hopefully I can make some sense of this.
If you treat this as a capturing race, then technically the white group dies if playing at A and another another inside liberty. It’s true that the resulting shape is dead, but in a capturing race, black still captured the group. Secondly, black’s group only has an eye if we’re assuming it’s not a capturing race between the two inside group.
For an example, if it is a fight between A and B, then black has a big eye. 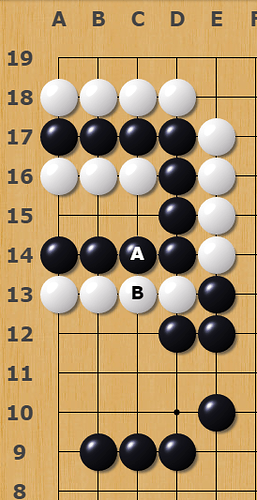 When it’s whites turn: Playing at ‘a’, he creates a bulky five (if black respondes or not) and black is dead. When it’s blacks turn: Black lives with a seki.

Thanks, that lead me in the right direction.

If we take away the possibility of almost-filling with a killable shape it works again according to the book:

If Black and White have the same number of outside liberties and there are two or more inside liberties, the result is seki.