You can download it and open it locally, it works ok offline.

Congratulations, everyone! The tournament has started!

The total number of players is 2233 which seems to translate into 223 10-player groups and one 3-player group. The number of matches in the first round is 10038. Considering we have slightly more than 31000 active correspondence games on OGS right now, that’s almost a third! A few people got scared, more than 60 matches are finished already!

The tournament took quite a while to boot up. The start time was 0:00 on July 1st, Moscow time. At 00:08:46 the notification about the tournament start was sent out and the server began starting games. At 00:31:19 all games were started, and the server was quite laggy even after that. So it took more than half an hour to start!

I saved the tournament page as pdf so it’s easier to look through groups until we get a better solution: linky (better download and open it locally).

With the number of players this large, games are pretty evenly matched. The very top group consists of high dans only. I hope they’ll have fun playing each other.

Quite funny how the numbers work. Out of more than 2000 players, there’re only 75 dans. One dan player per around 30 kyu players.

Important notice: black get only 3 days to make their first move!

Other than that, no need to rush. It’ll surely take quite a while so take your time. Have fun, everyone!

Phew, now let’s forget about this like it was just a bad dream. I’m not gonna try to repeat anything like this anytime soon.

Besides games that ended because someone immediately resigned, this appears to be the first game that finished.

It even went to scoring (W+1.5) and, based on the chat timestamps, it took only about 1 hour and 10 minutes of actual play time.

When I was a bit younger and had more time on my hands I confess that I was responsible for quickly finishing many games in McMahon tournaments. I would get lucky and run into my opponent when he/she was making their move and we would both sit down together and just play the game out right then and their like it was a live match.

But now I have come to the point where I really appreciate just taking my time on each move and taking advantage of the fact that the game is correspondence. It is a little lesson I learned from one of my few DDK students some time back.

This particular player spent literally a few hours on some moves and would think about it for about 15- 30 minutes at a time. I am no serious teacher and I haven’t seen how quickly everyone progresses but I have to say that this guy learned much quicker than anyone else I have ever met, eventually surpassing me even though I had been playing much longer and had many more games under my belt. He played very few games total and unfortunately stopped playing nearly two years ago but had a great lesson for me as a serious player.

Some people don’t always want to wait that long though and so prefer to move things along quicker. It really just depends on the kind of person you are. I just don’t see the need to rush anymore.

yeah… I was at the bar and bored so figured I’d play it out.

I wonder how long I will take to finish my games. I won’t be last, but nowhere near first either.

Hurray, it has started. Many thanks to S_Alexander for taking the initiative (and all the invitation work)!

Here are some stats that I generated from a snapshot a few hours ago:

So far it’s pretty boring, but I plan to post this every Wednesday from now on.

Only one person has withdrawn, but several others have immediately resigned all (or nearly) of their games. Perhaps, most of those intended to withdraw as well, but did not understand that they have not yet. If they are still active years from now, they might be surprised to get notifications about their second round games starting. Then again, perhaps a lot of people, still intending to participate, will also be surprised when the second round eventually starts.

but I plan to post this every Wednesday from now on.

Promise to do this for the rest of the tournament?

I’m doing some stats too and I noticed some weird pairing.
I don’t know how to point that without using players names: no bad intentions in that.

There are few more groups that span over 4-6 rank levels, while the others are nicely paired.
There are dozens of groups with ten players of the same rank.

Promise to do this for the rest of the tournament?

Promise is a big word. Real live might interfere. And - let’s be honest - it’s not unthinkable that at some point I may lose interest in this tournament or even in go generally. And let’s not forget I might die. So let’s say ‘hope’ instead of ‘promise’.

Here you can see player’s ranks for each group.
Size is number of players. Dans are positive, kyus are negative. Provisional ranks (?) are excluded. 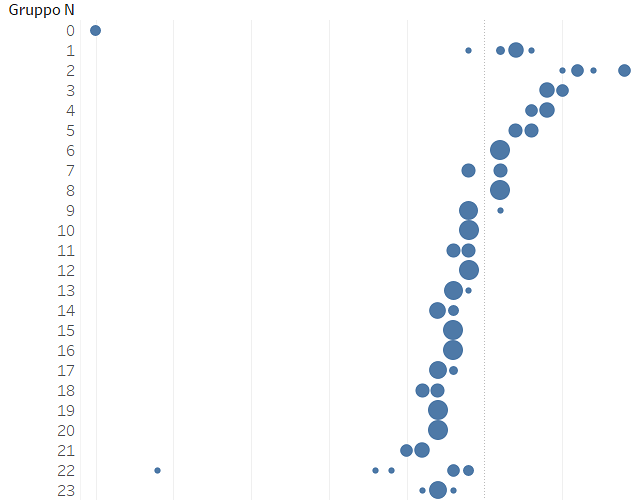 I’m doing some stats too and I noticed some weird pairing.

There are few more groups that span over 4-6 rank levels, while the others are nicely paired.

Wasn’t there recently a big shake up with the rating system, which may have inadvertently caused further ratings issues?

I imagine those issues have impacted the groupings in this tournament. I have not been following those threads closely, but my understanding is that there were major changes to the ratings system, which adjusted a lot players’ ranks, roughly a week before this tournament started. However, major issues were then noticed right around the time that the tournament started, so while players’ ratings will eventually be corrected, the groups have already been set using the incorrectly adjusted ranks.

Hey S_Alexander! Thanks triple for all your hard work putting this together! It’s awesome! 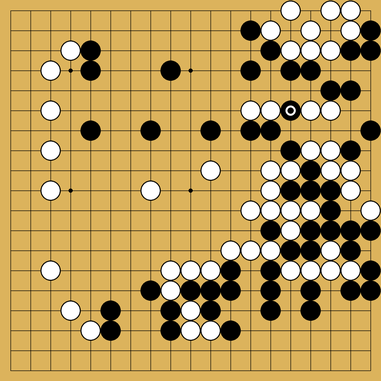 
Finished my first game!
I just realized that you can get a preview of the game. Using this, I can find out that the first OGS game was:

I imagine those issues have impacted the groupings in this tournament.

It’s possible.
I don’t know the code so I let the TD @S_Alexander and OGS team decide if there’s need for further investigations.

I think what’s done is done for the first round. Games have already started, and some have even finished. It’s impractical to reset the first round (even though it has just begun its multi-year journey).

The groups might not be as accurately matched (in terms of actual strength) as they could be, but that’s okay. I think the groups in subsequent rounds will be reseeded, so the issue won’t persist.

I can’t imagine my heirs will file a claim to adjust my rank in my memory, tbh.

Crunched some numbers and made a little figure 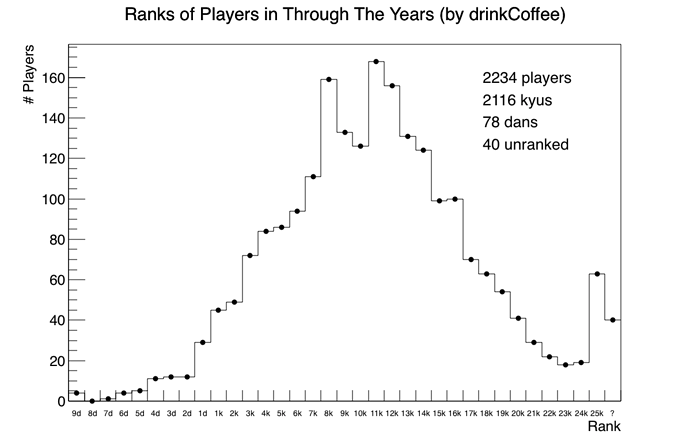 I think what’s done is done for the first round.

It’s impractical to reset the first round

I don’t think it’s doable in any way.

Well, I am fine, but we could ask Fair Fight and Seventus. Looks like they’ll face a quite frustrating first round.

file a claim to adjust my rank

That’s not what I had in mind: if the groups have some failings there could be a bug to track and fix before next round and for the happiness of all living subscribers of whatever tournament (even those without thousands of people and dozens of rounds).