He’s been urging us to squash that curve

we can can squash that decided games curve!

I take it to mean more than half

I agree. I don’t think it can mean anything else. Certainly not in the context of a binary situation. If the intention is to mean “almost all the games” that is a different thing. I understand there is an American English formulation where most is used in place of almost but I don’t think this is the usage here. It would still need to be “most all the games” I think but I’m not an expert.

I agree with this. Such words as "most’, “the majority”, “the greater part” and so on refer to anything over 50%, which in turn can be more than a “significant” or “large” part, but often smaller than “almost all” or an “overwhelming majority”. In English, we seem to lack an unambiguous term for a proportion of about 60–80%.

One way to do it might to abuse language a little by saying that “the typical game has been completed” or “typically, games have been completed”. Although, even “typically / usually / generally” are quite ambiguous terms.

An important question I’ve been thinking about since the start of the tournament. Are we ok with paused games? I feel like while the joke is to have the tournament to be really long, I still meant it to finish at some point. And 7 days per move + weekends + vacation should be plenty to make one move. I think pausing games just for the sake of prolonging tournament is a bad taste. On the other hand having no pauses policy is bad taste also.

@Lys if you have a book (or a blog) about data visualisation I definitely want to read it. The plots are really cool! What are they done with, matplotlib or? (It might’ve said somewhere but I did skim through a couple of hundred posts and probably forgotten a lot or info!)

Tableau is visual analytics software for business intelligence. See and understand any data with Tableau.

If you want to see some very cool chart, look at Tableau Public gallery:

Here some more informations about my tools:

Hi there! This is a very very newbie topic!

I would like to retrieve some data from OGS in order to make some chart. For now I would be happy to get my data (games, players involved, who won, board size and so on). Thanks to @S_Alexander I got the very basic of it: I can ask the server using a http GET request (never heard of before) Answer can be in json format (never heard of before) In order to do this I have to send a sort of URL to the server (wow, sounds easy) Example of this…

Would it be possible to limit pauses to say a month?

Pausing when both players agree and there is a reason, like one player having run out of vacation and not being able to play for a while but still planning to play again later - totally fine.

Pausing, just because it’s possible - no.

That’s my view on it.

In English, we seem to lack an unambiguous term for a proportion of about 60–80%.

Disclaimer, again : I’m not an English native speaker. What I had in mind in my infamous-over-commented remark was French la plupart which has the same ambiguity, being a contracted form of la plus grande part. But no dictionary ventures as far as defining how much this part must be the greatest one, if it’s the majority plus one, or 75% or 95%, and actually it might be any of those, depending on the context. In most usages of la plupart, it means clearly a comfortable majority, obvious enough that you don’t have to count. Like “La plupart du temps, il pleut en Angleterre.”

So, how many games have only two moves played?

Your milestone announcement seems to imply that this is not zero.

We’re going to be doing this for a while …

Also there seems to be some kind of weekly waves in timeout line. Perhaps because of the we pause?

Don’t worry, you’ll just have to be there for the second edition in 2047

if you have a book (or a blog) about data visualisation I definitely want to read it.

I am a huge fan of Hans Rosling
I highly recommend watching any of his lectures.

He had data visualisations that contain five orthogonal pieces of data about each country, and the information was conveyed so clearly that you simply cannot help but understand.
The subject matter itself is of the utmost importance, and if you treat yourself to one of his lectures, you truly will understand the world a little better.
I believe he open sourced the software he used, though I’ve not really looked into it.

And while I’m here, props to Flo Nightingale, the mother of all this.

I think many of his graphs were re-implemented in D3 by D3s author—then a data-visualizer at the NYT—Mike Bostock. Here is an example gallery of his graphs.

I think you might be talking about the famous wealth of nations, which compares live expectancy (y) with income per capita (x) over time (t), with geographical area (a) and population (p) controls (total five variables).

A nice example of Mike Bostock’s work I find is the Obama 2013 budget proposal. You can clearly see the Hans Rosling influence there.

I am a huge fan of Hans Rosling

Gapminder site is huge. I love the maps too.

Gapminder: Gapminder Foundation is fighting devastating ignorance with a...

I think you might be talking about the famous wealth of nations, which compares live expectancy ( y ) with income per capita ( x ) over time ( t ), with geographical area ( a ) and population ( p ) controls (total five variables).

That is indeed the visualisation I was thinking of (though sometimes with child mortality and children per woman).
Sometimes he just uses boxes (as in real boxes, not on a screen).
Wow! That is a hell of a lot of choice of visualisations on that D3 page! Are they free to use?

Are they free to use?

I think so. D3 is it self BSD-3 licensed, so you can use it wherever you like. I can’t imagine that the observable notebooks have any stricter license. I saw the Joy Division plot is under CC-4 NC SA which means you can create derivatives and share them as long as you’re not making any money off it and release it under a similarly permissive license. 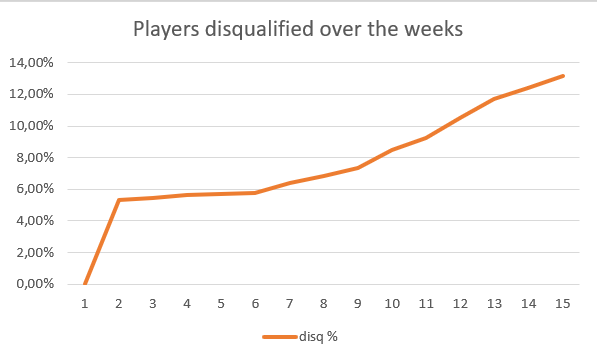 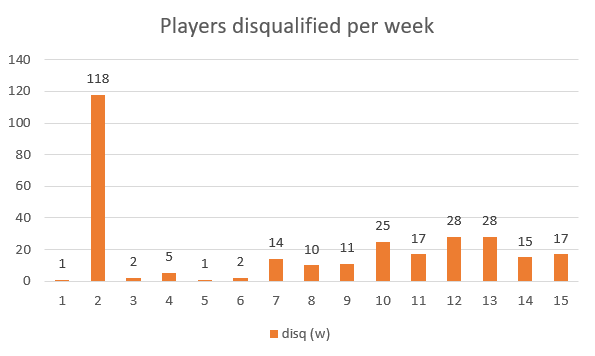 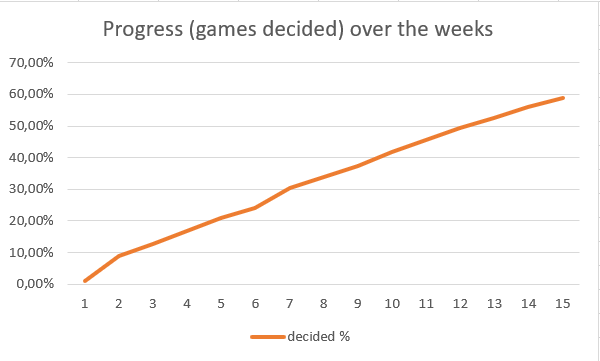 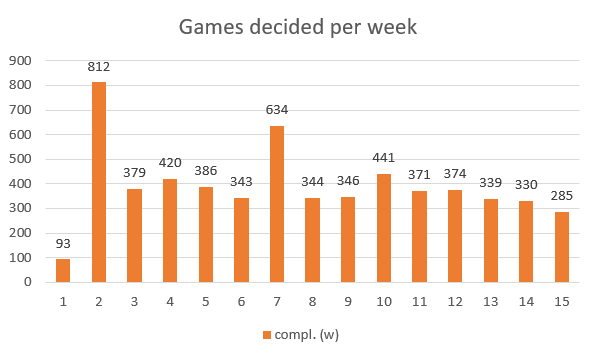 First week with fewer than 300 games finished. The flattening of the curve has started.

So, how many games have only two moves played?

Indeed, that’s the real question. @S_Alexander can you point at the games with the fewest moves, or even have an idea of the number of moves vs number of ongoing games relation. A call to data miners, @Lys, @richyfourtytwo would you be able to extract that?